Strings. It’s all a big mystery isn’t it? Every guitar hero and bass god has them, they make the sound that we rock to but what are strings?

How are they made? Why are some thick and some thin? What gauge strings do AC/DC use? Can I get my own personally made strings to whatever specification that I want? Can anything be strung? What about a staircase, can that be strung? Let’s find out all those answers…

Angus Young, look he has strings on his guitar!

I must admit I’ve been playing bass for around 30 years now with very little real understanding of (or interest in) what strings actually are. I’ve also been a guitar tech in that time and tuned and changed strings for some of the Metal greats without ever wondering how a string was made.

In a bored moment once, I wrote what I knew about strings on the back of a postage stamp with a very small pen.

It said this: “Thick strings are wound- they have a central core wire and another wire wound around them. Thin guitar strings don’t have the winding. Thin strings have high notes, thick string have low notes. You have to stretch new strings or they go out of tu…”.

Then I simultaneously ran out of space on the postage stamp and knowledge of the topic.

This changed when I met Andy Haslam. He’s also a backline tech- and more interestingly a string maker. He actually makes the things from scratch!

He works for Newtone strings a small company based in Derbyshire, UK that makes individual strings for any instrument, to personal specifications if needed and all by hand. Andy put me in touch with his boss, Neil Silverman who runs Newtone strings. 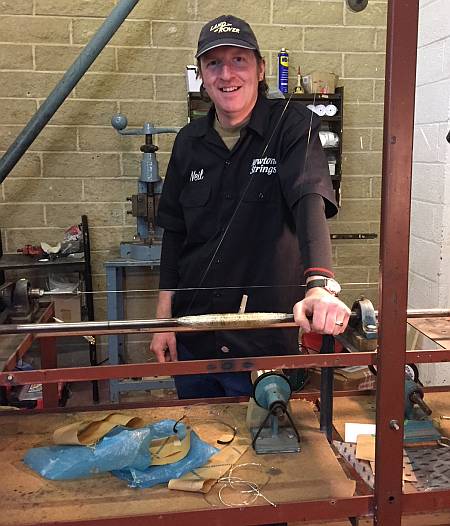 As Neil makes guitar strings from scratch he clearly knows everything there is to know about strings so I got him to tell me all about them too. I think it’s fair to say that I learned quite a bit along the way.

I’m going to need a bigger stamp next time.

So then, let’s start at the beginning like I’ve been told to do in interviews. What got you started in the string making business?

“I fell in to the job really, straight out of college. One of the college technicians had previously worked for Newtone. When I mentioned I wasn’t going to go on to Uni and was looking for a job he mentioned his old job was still available and it was on my doorstep.”

Can you tell us briefly, the basic manufacturing process of a guitar or bass string?

“A ball end is fixed to the string wire by twisting the wire together to hold it in place, then (in the case of a wound string) a softer wire is wrapped over the length of the core wire to increase its mass.” 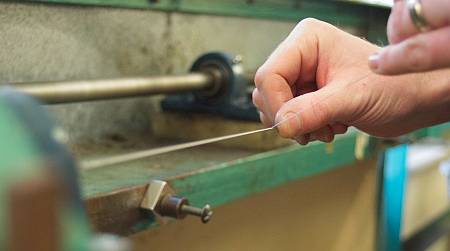 Is that right that at Newtone you can make any kind of strings, any size for any kind of instrument at all?

“The strangest one was probably strings for a spiral staircase. Instead of just spindles holding the handrail up, they wanted vertical guitar strings running down the stairs so you could run your finger over them as you walked down the stairs! Otherwise, for us harp guitars, extended range and fan fret guitars are pretty common.”

How does your manufacture process differ from that of the big string making companies?

“The basic process is the same but few companies make them by hand anymore. Where we really differ though, is in the combinations of sizes and types of wire used. And only Newtone will talk you through and offer you many variations of core type and size as well as overall gauge, plus your choice of the main types of wrapping wire, all of which will affect the tone and feel of the string.

“We approach string making in a similar way to a luthier does making an instrument. We have our own ‘standard’ variations, but can then help fine tune those strings to suit the players needs and requirements.” 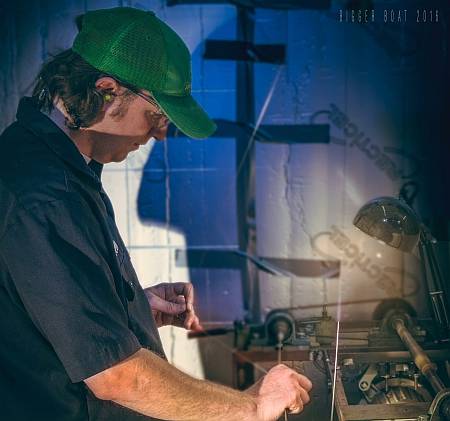 Neil making a string by hand

So back to the basics of strings, the basic core wire on a wound string is the same for all strings and manufacturers, right?

“Well, no. Most mass produced strings are made with Hexagonal cores and as far as I am aware only DR offer a mass produced Round core string.

“We offer both options. We do believe that, especially on acoustic instruments, a Round core offers a warmer more appealing tone, but in some instances it can be used to achieve a brightness that you cannot get with standard Hex core strings.

“The Round core does give a slight lower tension to pitch when you compare two identical gauged strings, made with the same size core and wrapping wire, with the only difference being the shape of the core.”

Now this “tension to pitch” idea that Neil just mentioned may need some quick explaining for the uninitiated.

Basically as a string is tuned upwards in pitch it naturally becomes tighter, with more tension. Conversely tuning a string down in pitch makes it more floppy, with less tension on it. That is the “tension to pitch” ratio in a nutshell.

This is important for the player. And this balance between playability and fat sound is why different players use different gauges of strings for their different styles.

For example Angus Young uses a relatively thin .009 gauge on his high E string to play his lead solos, while his brother Malcolm used .012 gauge to play his fat rhythm parts.

Most string manufacturers commonly market strings between .008 and .013 gauges. Does this make sense? OK, now Neil is going to teach me more about it.

“It is however possible with wound strings to have a big effect on the tension of the string by changing the core-to-wrap ratios. You can make them higher or lower in tension depending if you want them easier to play, or to tune up to a higher pitch. Or you can go the other way and increase the core size to allow for drop tuning.

“This is also useful for players with problems such as arthritis, where a lowered string tension while maintaining a familiar gauge can greatly ease their playing.

“Again, at Newtone we can talk through the customers’ requirements and make strings to their individual needs.”

I’ve noticed that some bass players (very few in the Metal world but Steve Harris from Iron Maiden is one of them) play with flat wound strings. Tell me about them.

“Regarding the manufacturing, instead of a round wire you use a flat wire which gives a smooth finish which has none of the string squeal you get when you slide your fingers up the strings. This also results in a much warmer toned string which has less harmonics with more of a pure fundamental note.

“We don’t currently offer flat wounds. It is something we are often asked about and I am working on them.” 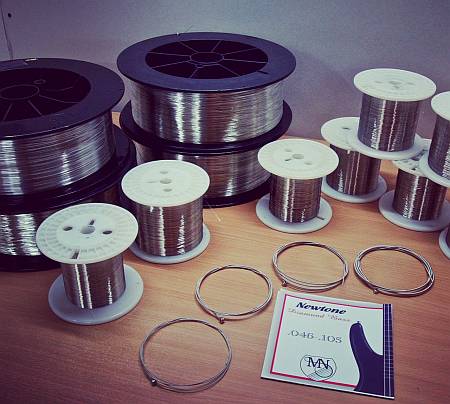 The raw ingredients for a set of strings

OK, now I need to ask him some questions about maintenance of guitar and bass strings. This is because I’ve been a musician and guitar tech for several decades now and I’ve just realized that prior to this conversation, I really knew next to nothing about the very things I was working with day to day.

I understand the basics of changing a string ball end at the bridge, pull it up the neck and into the machine head with two or three win dings and cut off the remainder). Is there anything special I need to know about changing Newtone strings?

“Most strings, even some of our own, are made using Hexagonal cores, and as you know they have an angular circumference. When the soft wrapping wire is wrapped around the core it moulds itself around the shape of the core and grips to each vertex of the Hexagonal core. So with every wrap the outer wire makes, it grips and stays in place.

“When using a Round core, the wrapping wire moulds itself around the core as it is wound, but without an angular surface it has nothing to hold it in place, and once the tension is removed from the wrapping wire it will spring back on itself and you can quite easily slide the wrapping wire up and down the length of the core.

“When making our strings we create a small rectangular cross section in the core where the winding of the strings will end, and when the wrapping wire passes over this it grips to it in the same way as a hex core, but only for that small section, and is enough to keep everything in place down the length of the string.

“If you cut the string to fit your guitar, there is no longer anything to hold the wrapping wire in place and the wrapping will come loose and result in a very dull, thud of a dead string.

“Next time you string up with our strings, try running your fingers over the last few inches of the string and you may be able to feel this flattened section, it is often more noticeable with the thinner wound strings. Once the string is installed on the instrument and is up to pitch, the te

nsion on the string being wrapped around the machine head is enough to hold things in place, making it safe to cut off any excess string.” What are your recommendations on stretching strings in once they’re on the instrument? We all know a new string needs to be stretched in to maintain tuning…

“But over stretching can kill a string the same way ages does. The string stretches each time you retune it and it can only take so much. Dirt getting in to the windings is also a factor.”

Yes, this dirt. I’ve noticed as a guitar tech that this dirt builds up quicker on some musicians instruments than others (I’ll name no names). These musicians’ strings then need changing more frequently. Is it that they have dirtier fingers or is there something physically different about these people?

“Yes, an acidic sweat will cause strings and hardware on a guitar to rust very quickly. Everyone is different.”

People are different? Now this is interesting. Prior to Neil telling me this I thought it was mostly down to whether or not they washed their hands after dinner.

Now I understand its just down to their diet, genetics and the pH level in their sweat I’ll be less reluctant to shake their hands upon greeting. So there’s something useful I’ve learned.

What are your recommendations for good care of strings and how often you should change them?

“Flicking the strings off the neck of the guitar after playing can help loosen and remove some of the dirt building up in the wound strings.

“Then a quick wipe over, something most people do anyway. As to how often you should change them can be very personal, but as we mentioned before, if there is acidic sweat involved you will need to change them sooner.”

Hang on, back to the people with the stringed staircase. If they’ve been rubbing their grubby mitts up and down those strings for a few years now. How often have they asked you to go back and re-string them?

“No, never as far as I know. And that was a good few years ago now.”

Uuurrrgh! They must be pretty unpleasant by now.

So, there you go, dear reader. You now know everything that I know and about half the stuff that Neil Silverman knows about guitar strings. Only you can decide how much of this information will possibly enrich your life. 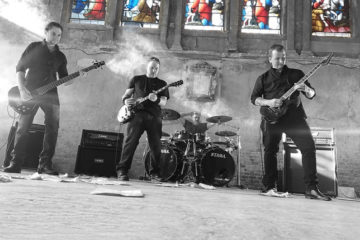