“Fans of ’90s Black Metal will love it,” frontman Per Kolderup Finstad says. “We at Burning Darkness don’t concern ourselves with current trends. We play the type of music we love. Still not rigidly stuck in one spot, we musically take inspiration from other Metal genres and beyond. The new album has more variation than our debut. While it goes mostly quite fast, we’ve added slower and heavy lead parts as well. Rawness is balanced with atmosphere.”

Dödens Makt includes two singles. Chiropteran Demon’s “primitive intro evolves into a progressive verse that mutates into an aggressive chorus making it a fair representation of the new album,” the band said. This “was chosen as the first single because of the raw old-school energy mixed with some more modern heaviness. We felt the somewhat unorthodox mix worked really well.

“There are also some horror elements to the music which goes together well with the titular demon the lyrics talk about.” The second single is the symphonic tinged, atmospheric She Who Dwells Beyond The Branches.

The Power of Death

Burning Darkness has succeeded in being more adventurous with Dödens Makt, which translates as “The Power of Death”. It is a more varied and atmospheric recording than the raw and intense debut, The Angel Of Light (2017), mixing fast tempos, intense heavy elements and classic melodic tremolos and progressive elements, all making a very complex and interesting listen.

They have kept with some aspects of the lyrical themes of the predecessor, death and anti-Christianity, but also added new ones such as horror and Norse folklore, expanding their scope and making this an even more engaging listen.

Muspelhems Vrede edges towards you, initially not giving anything away, but there is a sinister undercurrent as it approaches, ramping up to a full-throttle, intense Black Metal delivery one minute in, ensnaring you and dragging you along in its dark, gnarly wake, an attention-grabbing opening piece.

Sulphurous Wrath is a blisteringly awesome track. Everything about it is magnificent, the driving riffs, the symphonic undercurrent, the raw rasping “dual voice” to the vocal delivery, the bursts of leadwork, the first of which rises up and ruptures forth and the second soars out of the melody in the second half majestically. No surprise that this is my favourite track on the album.

Chiropteran Demon, the first single, as the band have mentioned, is a fascinating meld of old and new genre elements, both of which work well together and give the track a unique feel.

She Who Dwells Beyond The Branches, the second single has a comfortably familiar sound, with elements reminiscent of many of my favourite Black Metal tracks, and there’s a touch of Necrophobic lurking in there, whilst being its own unique beast entirely, and I love the dark melody that weaves its way through—another great track.

Neonaticide is a dark pounding driver, with acerbic vocals that slice through as sharply as the riffs into the pounding undercurrent, a wonderfully unrelenting listen, until the final minute when it pares back slightly, but never enough for you to break free from its unforgiving grip.

Draugr is powerfully punctuated with the spine-chilling roar of “Draugr!” across its first half and at the close, along with driving riffs in the second half and also boasts some superbly sinister melody and leadwork.

Distant and haunting to open, In The Shadow Of Webbed Wings sneaks up on you in a stealthy sinister manner when it arrives and delivers a mass of intense riffing and punch between swathes of eerie melody, an utterly mesmerising listen.

I love the dark, haunting melody and second half leadwork on the closing track. The precise, punchy Dödens Makt Är Stor opens with sinister intent, building with intense drive, a superbly dramatic way to close an album.

Available as digipak CD and digital. 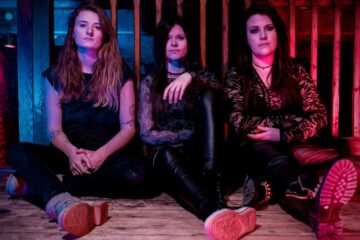