There’s a whole library of special Bloodstock moments, and another one entered the list like a bullet when it was announced that Ross The Boss was welcoming a very special guest to the set on the Ronnie James Dio stage, none other than former Judas Priest guitarist KK Downing.

This pairing was unexpected, considering that KK had not played live since his departure from Priest in 2010, and in one swift move, an already must-see slot took on the mantle of an essential Metal moment. Come the day, the excitement had started to build from the start, and there was a real buzz. Omens and portents were flying around, and even the Metal God Rob Halford himself decreed a blessing on all Metal listened to today, so we’ll take that too. 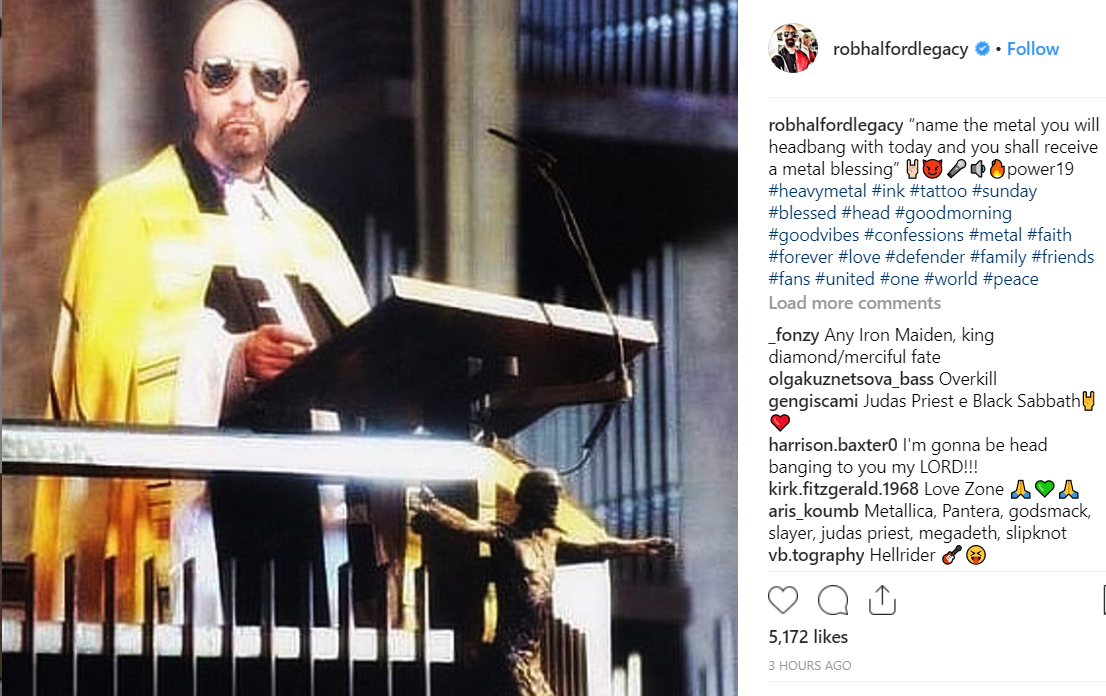 By 12 noon the rain was pelting down, with another appearance by the storms that had been a constant all weekend. At 12.35pm sharp however, the sun came out and Ross The Boss took to the stage, and a run of Manowar classics were unleashed, sounding as fresh as they did at their peak – no false Metal here, this is made to last.

It’s always such a thrill to see Ross “The Boss” Friedman play, with his trademark bombastic style that contains intricate elements, and the years have not diminished this at all.’Battle Hymn’, ‘Blood Of The Kings’, and of course ‘Hail To England’ rang out in this Derbyshire field that is forever Metal. 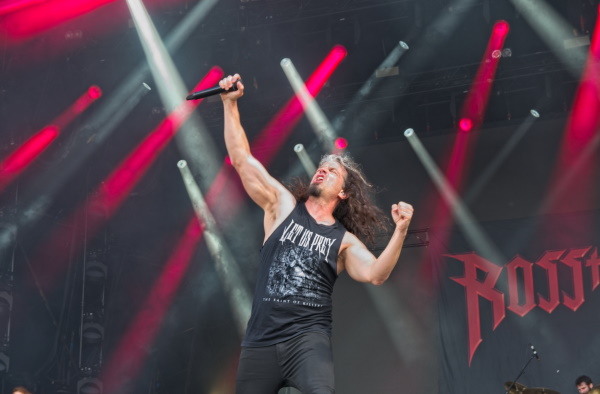 Vocalist Marc Lopes has a rich tone and a powerful scream, and is the perfect fit as a frontman, leading us into mass chants and sing-alongs. Together with bandmates Mike Lepond and Steve Bolognese, this is a tight unit, who slayed the Ronnie James Dio Stage, leaving wimps and posers no chance.

With twenty minutes to go, Marc intorduced the very special guest, and KK Downing, true Metal pioneer was primed and ready and bounded onto to stage like it was 1982 in Memphis.

Starting with ‘The Green Manalishi With The Two-Pronged Crown, the rapid fire four song setlist didn’t waste a single note, and left everyone satisfied and also wanting more. 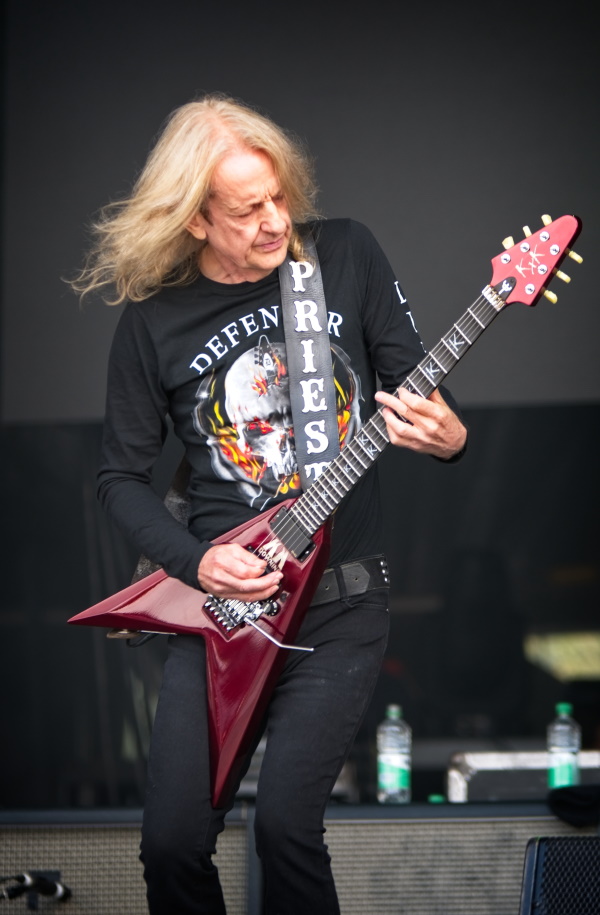 We’d be here all night if we tried to make a list of how many Metal guitarists Ross and KK have influenced, and surprisingly this is the first time they have ever played together. It was instant chemistry however, and the two traded riffs and duelled like they’d been bandmates for years.

Heading Out To The Highway’ was next, KK is wielding the flying V with the beautiful burgundy finish and the scale of the occasion is just starting to sink in. 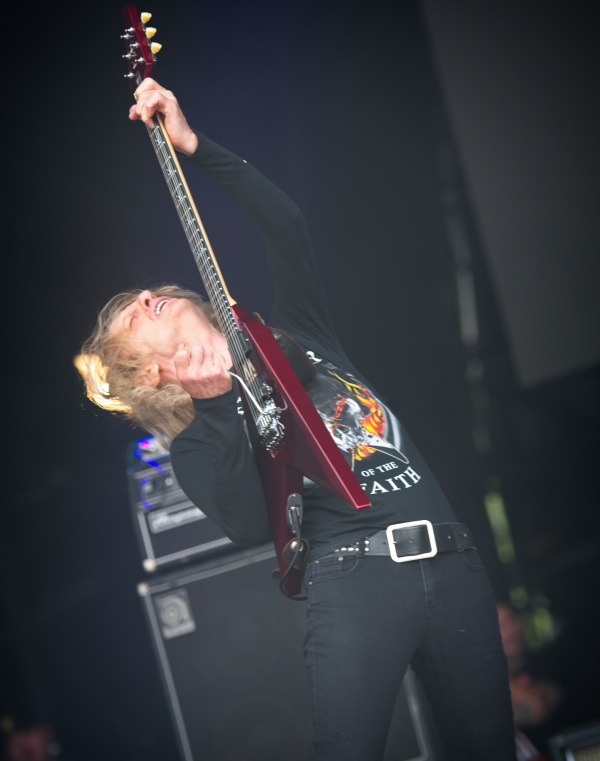 With ‘Breaking The Law’ given the Ross The Boss treatment, this classic anthem had a new jacket, which suited it very well, another one that saw the crowd in great voice.

By the time we got to the final track, ‘Running Wild’, KK was just getting fired up, really going for it with those intricate runs,and the pairing of the legends was every bit as special as hoped for. This is hopefully just the beginning. 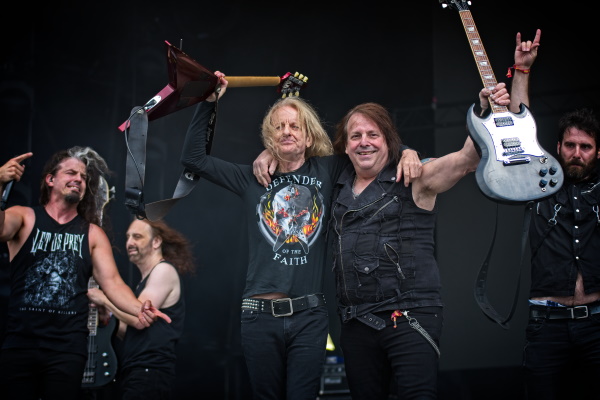 Five minutes after the band left the stage to almighty roars, a Lancaster Bomber, one of the only two remaining airworthy models in the world, flew over the Bloodstock arena. It would be fitting to think that there was a connection to what we had just witnessed, a sign from the Gods Of Heavy Metal.

OUR USUAL COPYRIGHT RULES DO NOT APPLY TO THE OFFICIAL PHOTOS INCLUDED IN THIS REPORT. PLEASE FEEL FREE TO USE AS YOU WISH, WITH A CREDIT TO JOHN INGLIS. IF YOU NEED MORE OFFICIAL PHOTOS, PLEASE CONTACT ENQUIRIES@METALTALK.NET 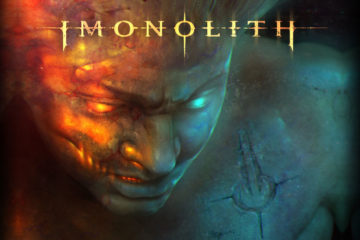