Formed by Riccardo Veronese, of Towards Atlantis Lights, Dea Marica and Arrant Saudade, and Roberto Mura from ‘Dea Marica’ back in 2012, Atmospheric Funeral Doom Metal project Aphonic Threnody have had, over these last eight years, a very fluid, international line-up, but the one consistency has been the quality of music produced.

The quality of music continues with their third full length ‘The Great Hatred’ which follows more closely in the footsteps of their first release ‘When Death Comes’, rather than it’s predecessor ‘Of Loss and Grief’.

The with current line-up is Ricardo Veronese on guitars and Juan Escobar, also of Arrant Saudade, covering vocals, bass, guitar and keyboards.

‘The Great Hatred’ is a six track, fifty-six-minute offering, which is a very cathartic listen, bleak yet beautiful, haunting yet melodic, painfully crushing yet empowering and uplifting.

It is an album you can fully immerse and lose yourself in and be unable to tear yourself away from.

In the best Funeral Doom traditions, all of the tracks are hefty beasts and all between the eight and twelve minute mark. So you will need a comfortable chair to ride this wave of bleak despair.

Opening on ‘Locura’, the Spanish for “madness” of the severe chronic psychosis type, you find yourself slowly drifting into the music as the bleak funereal pace wends it’s way forward. The track is garnished with growls and tortuous screams and elevated with emotive keyboards, which add a choral like atmosphere, elevating the mood for the burst of midpoint reflective clean vocals. The track ebbs in and out, giving a feeling of inner conflict.

‘The Great Hatred’ has bleak guitar notes and a hushed spoken opening, building into a slow but intense web of layered guitars and keyboards, permeated by harsh rasping vocals. Intensely crushing waves of riffs add to the complex layering, with midpoint leadwork that is fittingly slow and bleak, as is the second half burst which has an even bleaker quality to its delivery, ending on poignant closing violin. 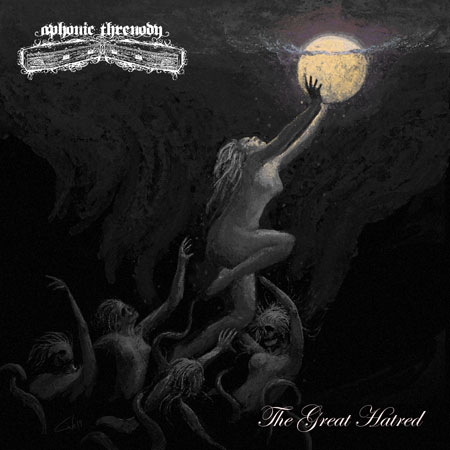 There is a very sinister air to the opening piano work on ‘The Rise of the Phoenix’ and the riffs and bass balance against each other.

The guitars elevate and the bass work pulls downward, again more of that powerful ebb and flow, then at the  midpoint there is a sublime undercurrent of guitar work which pushes gently against the powerful bass lines, that go on to take a dominant stance in the second half, before being superseded by a hauntingly sublime melody with tortuous vocals, fading out like dying embers.

Final piece ‘The Fall’ is bleak and crushing, with vocal growls that are often harrowing, punctuated with suitably bleak piano work, a darker layering of bass and guitar and further melancholic waves of keyboards.

‘The Great Hatred’ is out on Transcending Obscurity Records on the 16 October.

A powerfully moving and at times disturbing listen which makes you question yourself.