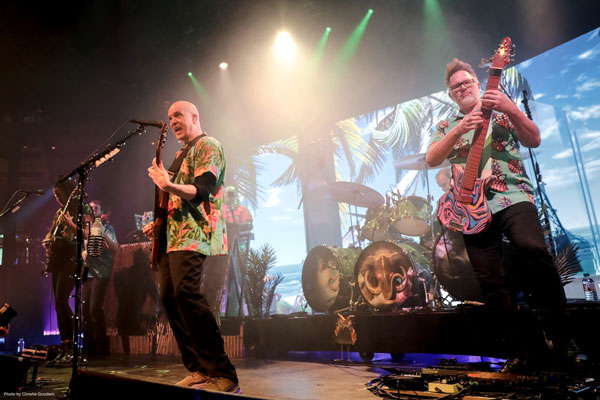 Cast your mind back to the time when we used to be able to go and see live music. It was a wonderful time.

The last gig I attended before all this virus malarky was Devin Townsend at The Roundhouse in Camden on a rainy night in December 2019, that most of you will remember as the night Boris Johnson became British Prime Minister.

The sold out crowd at The Roundhouse that night have very different memories and here they are for all to see and hear.

The penultimate gig on that tour tour was filmed and is now presented as ‘Order Of Magnitude: Empath Live Vol. 1’.

Devin told MetalTalk: “The whole objective was that I wanted to make that statement: This is by the seat our pants

“Because it’s important to me to represent this hyper anal-retentive music that I’ve made over the years, but in a human way. Rather than it just being, ‘Well, here it is, perfectly done.’

“I was overwhelmed by the fact that all these brilliant people that I have so much respect for were willing to come together and play this weird shit with me.

“I had these unique players and this interesting instrumentation that allowed us to interpret the music in different ways.

“It was clear to me that I could just have fun and be me and know that they would be effortlessly be able to follow that.” 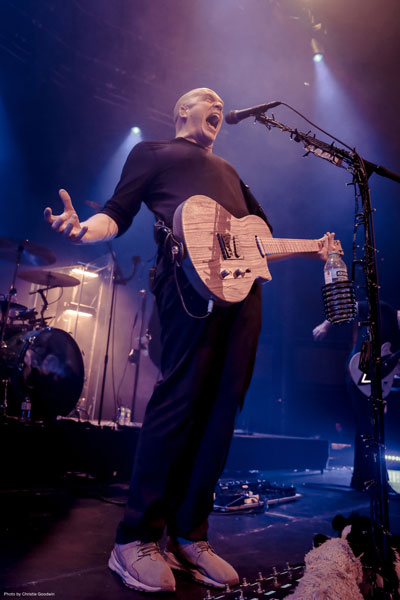 I have to say that ‘Order Of Magnitude – Empath Live Volume 1’ is the best mixed out of all of Devin’s live albums. All 10 performers on the stage can be heard with crystal clarity. Yep, you did read that correctly – 10 performers.

They are: Diego Tejeida on keyboards and cocktail mixing, Nathan Navarro on bass, Morgan Agren on drums, Ché Aimee Dorval on vocals and guitar, Markus Reuter on touch guitar, Mike Kenneally on guitar and keyboards plus a 3 woman choir of Anne Preis, Samantha Preis and Arabella Packford and obviously Devin Townsend himself.

The reason for such a big band was that Devin wanted everything that was played on stage to be 100% live.

No backing tracks or computer aids, just pure live music and to say that this group of musicians rose to the occasion would be an understatement.

Devin is not known for writing three chord songs, so pretty much everything that was played was complex, but here, the band just took it in their stride.

Here are my highlights from this incredible show: the band arriving onstage one by one in Hawaiian shirts and being given a freshly mixed cocktail from Diego Tajeida, the sense of joy and community between the whole band and the audience, a hypnotic jam between Devin, Diego and Morgan (playing an improv kit centre stage and utilising that well known percussion instrument – the electric fan!), ‘Gato’ and ‘Heavens End’ in the set, jazz hands, Dev in a black tutu for a spellbinding rendition of ‘Why’, a note perfect rendition of schizophrenia set to music ‘Genesis’, getting our groove on with a joyful cover of The Trammps ‘Disco Inferno’ and finishing the evening with a staggering version of ;Kingdom’. 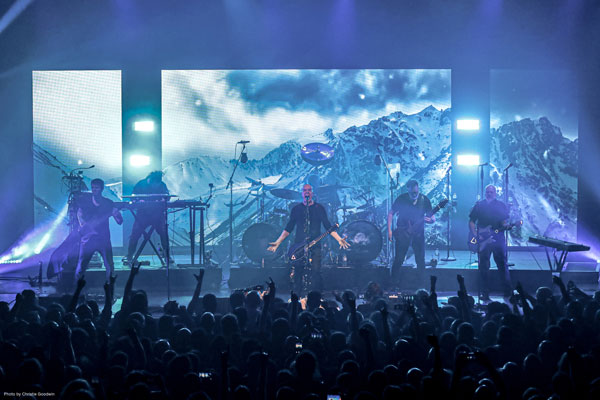 The ultimate highlight was the stripped down, acoustic version of ‘Spirits Will Collide’ with Samantha Preis on lead vocals.

I was in the balcony for this gig and at the end of ‘Spirits…’, everyone around me was in floods of tears and we were hugging complete strangers.

It was such a privilege to be part of such an emotional moment.

The DVD shows everything in hi-def resolution and it is not a massive jump-cut fest.

The sound mixed with the wonderful visuals and glorious set list easily makes this the best live Devin Townsend package yet.

A paired down version of this show did the ‘Empath Live Vol 1’ North American tour, which had to be cut short due to this ongoing pandemic.

At least our cousins across the pond will get to see and hear the complete show.

I cannot thank Devin enough for releasing this and giving me a permanent reminder of one of the best gigs I have ever seen.

Now you all can see it too, in it’s breathtaking glory.

You can read our review of the evening here.

The blu-ray edition of this forthcoming release features a behind the scenes feature, taking a look at the preparation for this tour and the filming of the live album. Watch the trailer here-