Slovenia’s Deathgrind legends, Dickless Tracy, named themselves after a wordplay in the film The Hard Way (starring Michael J. Fox and James Woods), and although the name brings many different and mostly unserious interpretations and sniggering, including initially, many years ago, from myself, behind the name the music carries serious meaning.

But if it draws attention for the wrong reason and gets the right result, then it’s a winner. I may not have given them that initial listen and missed out on some superb albums.

Formed way back in ’97, over the years, they’ve edged away from their initial pure Grindcore sound and melded in that slightly crusty Death Metal element which makes this their fifth studio album, Grave New World, an eleven-track forty-six-minute chunk of brutally enthralling excellence.

Grave New World is such an engaging and accessible listen. The line-up, thirty-four years later, has seen many changes but still contains founders, brothers Tomi Cepanec on vocals and guitars and Ivan Cepanec on drums joined by long term bassist Jernej Rejc, completing the trio and this massively crushing sound.

The title, Grave New World, is also an intriguing play on words and features nine new songs, one re-recorded number, and one never released single, looking at the subjects of “death in different forms, mainly the causes of death: consumerism, war, religion, and human influence on the environment.”

The album opens with Deathless, a Lovecraftian influenced number, a chunky and well-punctuated driver of a track. This is followed by Dawn Of The Living Dead, a largely unrelenting brute of a track that takes a dig at mindless consumerism, mid-way plunging into a distorted drop away, levelling out into a hypnotic driving plod, ramping back up for a final frontal assault to close.

Pathetic Descendant Of Apes is brutal in delivery and equally brutal in its appraisal of the “human” with a catchily filthy and driving undercurrent that drags you along in this raw but engaging beast of a track.

I love the opening bass lines on The Apostles Of Terror, a powerful track from all perspectives. Initially, a chunky punchy plodder that shines a harsh light on the brutal doctrine behind certain religious beliefs, the pace builds like an angry out of control fervour. The sinister drop towards the close adds even more impact before one more brutal assault, flowing seamlessly into the title track, Grave New World.

This makes a stark commentary on the state of humanity as seen by Dickless Tracy, and for me, the repeated line “Anti-human humanity, grave new world, of cruelty”, in many respects, sums the situation up perfectly. Sound-wise, it boasts some superbly crunchy and catchy repeat Death riffs.

Morphing Into Maelstrom, also, to my mind, lyrically, has an eerie Lovecraftian feel, the repeating waves of intense riffs compounding that eerie, unnerving quality.

Devoured From The Inside, lyrically is the stuff of horrors, looking at the terrifying condition, Necrotizing Fasciitis, the rare but serious, often deadly bacterial infection, in all its gory depths. The opening gory blood-curdling growl, the frantic riffing, and surging pace reflecting the uncontrolled raging infection as it speeds out of control.

Faydark Forest is undoubtedly not about the gaming realm inhabited by elves. This seems way more sinister, a realm of nightmares and death, a driving beast of a track that packs a brutal punch, made all the more insane by spiralling and squealing riffs, the second half drop into utter brutality, an even bigger shock to the system.

This cleverly constructed track is full of surprises with every twist of direction, and the vocal delivery also goes the extra mile in terms of style, range, intonation and protraction.

Faydark Forest “speaks about the inner struggles, and the lyrics were written by guitarist/vocalist Tomi,” drummer Ivan Cepanec says. “Music-wise, it is our tribute to evil-sounding, twisted Death Metal in the vein of legendary New York bands Suffocation, Immolation and Incantation, and the middle part features a clear nod to the all-time class-sick Morbid Angel track, Immortal Rites.

The next track title, Dissection Of The Mind, is self-explanatory in a literal sense, with lyrics covering madness induced extreme self-mutilation, accompanied by bursts of manically sharp repeat riffing amongst a driving undercurrent and spiralling riff patterns, ebbing back occasionally. The calm before the manic storm, a deceptively complex and utterly fascinating track.

Next is a re-recorded version of The Curse Of Michael Myers, an old favourite that has featured on several splits over the years, as well as their Grind or be Grinded demo. Inspired by the fictional character from John Carpenters Halloween series of slasher films, it is a short sharp, dark and brutal and surprisingly catchy little number, closely followed by the equally short, sharp The Darkside, which has some superbly sinister riffs.

The intricately detailed and very thought-provoking cover art by Alen Grijaković was drawn by hand, using inks and fine liners on heavy art paper. It depicts “the condition of a contemporary human being who is alive but dead inside in the streams of modern materialistic life, and right now, unwarily awaiting the final exit”.

This gives you another indication of the depth of thought that exists within Grave New World.

I’ve got no favourite tracks here at all. Each felt like my favourite as I listened, but my mind changed with each subsequent track. Across the release, the composition, musicianship and deep growling vocal delivery are excellent.

This is a superbly brutal yet engaging listen, end to end. 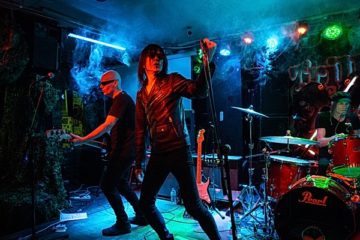