Founded around 2015 and hailing from the Brazilian city of Lages, Stoner/Doom Metal trio Acidemia have recently released their debut studio full-length Podridão, a slow, dirty and dissonant slice of Stoner/Doom that definitely errs on the side of psychedelic.

Podridão is inspired by the likes of Electric Wizard, Black Sabbath and Sleep and follows on from their 2018 EP Extinction and their live album in 2020, Live In Swamp.

Podridão is a seven-track offering that spans a chunky seventy-three minutes and deals with themes such as depression, anguish, anger and releasing the inner demons we all struggle with. Like many bands, the pandemic has influenced the content of this album, inspiring Acidemia to look towards more intimate and darker aspects of being human.

The lyrics are all in Portuguese, but that shouldn’t matter to non-Portuguese speakers as this album is equally as much about atmosphere and mood, and the music speaks volumes in its own right.

There is also a very experimental quality to the sound, influencing the way they meld fuzzy, often very distorted riffs with heavy psychedelic passages and equally ethereal and distant vocals, along with some unusual elements, all of which makes for a fascinating listen. 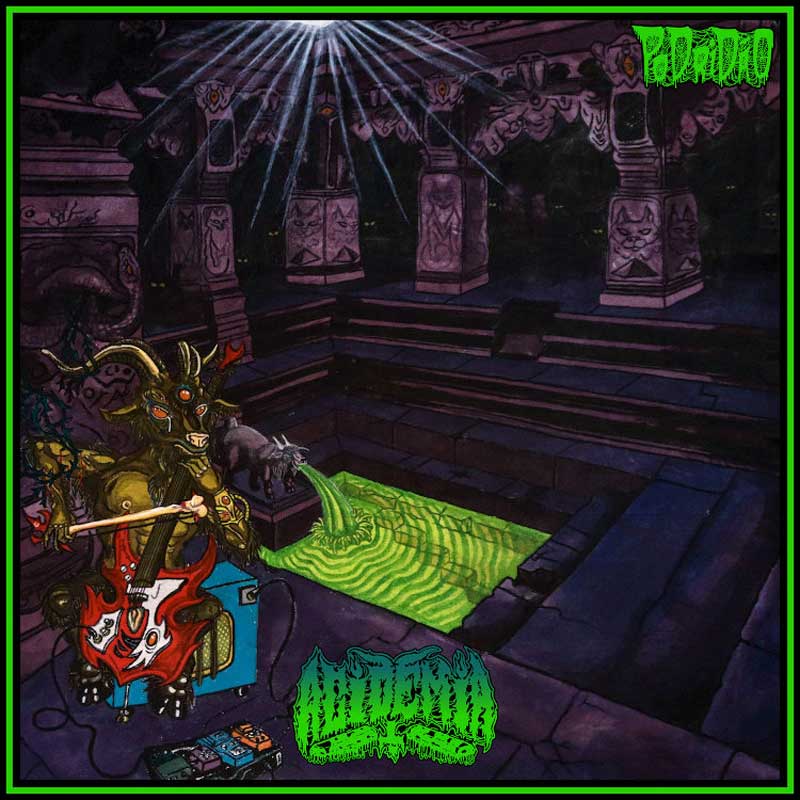 Podridão develops a more psychedelic mood the further into the album you get. Opening with Névoas de Ácido, this, initially, is a fuzzy, doomy and groovy number, developing the sounds of a storm brewing midway. After this, the atmosphere becomes hazy and distorted and decidedly trippy.

Mórbido is heavier, with a chunky hypnotic fuzz but still groovy and addictive, getting heavier as the pace drops, reaching that stomach-churning depth. It then takes on an unnerving quality, with a more sonic element accompanying the vocals, all the while following a meandering and psychedelically contemplative route. On the whole, it is a heavy crusher of a track.

Existência takes a step further into the psychedelic realms, with eerie string sounds, a crushing undercurrent that feels heavier and more oppressive than the predecessors. Even more distortion to the vocal delivery adds a sense of distance and eerie space, alongside an equally trippy fuzzy groove and a pace that rises and falls in a very spacy, sonic manner.

On Angústia, after a spoken soundbite, comes a groovy down-tuned guitar and drum repeat, which builds with heavy bass lines that mirror the repeat along with fuzzy distortion. The vocals are even more fuzzy, echoey and distant than before as you seemingly move further into the murky darkness. The vocals develop a distorted anguish to their delivery as you plunge further into the murky trip, a hugely atmospheric piece.

The title track, the twelve-minute Podridão, is a stomach-churning crusher from the offset. A slow-burning plodder, gradually gathering pace in waves that ebb and build tantalisingly, breaking into a spacy frenzy before taking an experimental noise infused twist to its construct, always with the hypnotic ebb and build.

The next track, Arcturianos, is a fascinatingly bizarre amalgam of noise, guitar, drum and spoken vocals that is as weirdly experimental as it is interesting. It also has a heavy, hypnotically fuzzy groove, coursing through from about midway onwards, which turns more psychedelic as the track progresses.

Podridão, in true Doom-style, is full of lengthy tracks, with nothing under six and a half minutes but the final track, Caximbo, is an utter monster at twenty-one and a half minutes. It takes its time to get going, building in waves of distortion, sonic and guitar effects, veering off in a different direction at regular intervals. It’s an utterly spacy and fascinatingly bonkers listen.

All in all, this is a recommended listen for Psychedelic Doom fans.

Podridão was recorded at Fatboo studio in Lages/SC, mixed and mastered by Stefan Duarte with cover art by Doomed_6b and is available as a digital release from https://acidemiaoficial.bandcamp.com/