Back in those days Steve Harris used to store all the band’s gear in his Nan’s front room in a house in Leytonstone, in the good old East End of London. But feeling that things were moving quickly, Steve managed to arrange a loan of about £3,000 and used the money wisely. We ended up with our own PA and, with Vic’s help we also got the now infamous Green Goddess.

She was a GMC Redline Lorry with space in the cab for a driver and two companions. The back of the truck had more than enough room to store all the band’s equipment and PA and we did a few gigs with Vic or Pete driving and two guys sitting up front, with the remainder sitting in the back with the gear.

This was obviously not the best way to travel with the rest of us huddled together, using sleeping bags and laying on the speakers or drum riser for comfort but this discomfort didn’t last long. After doing a successful show at a USAF (United States Air Force) Base at Upper Heyford, Oxfordshire, things, yet again, moved quickly.

But before I get into that, a little personal view of the gig at the Air Base.

I remember it being a really hot day. It was July 4th, Independence Day, 1979. When we arrived in the Green Goddess we had no idea what to expect. On arrival at the main gate we were given directions to the Mess Hall, where “you will deploy, and make good” (military speak for set up the band’s gear). OK, we can do that, we thought.

All of a sudden things were a blur of activity. Our equipment was out of the truck and “ready to be assembled”, (more military talk) and so, ready we were.

We were playing there with fellow rockers, Urchin, whose lead singer and lead guitarist, Adrian Smith, was one of Dave Murray’s best friends. I also knew at this time that Steve Harris liked Adrian.

Dave had often said that Adrian was his ideal guitar partner. Steve approached Adrian a few times asking him to join the band but while Urchin was still kicking up some dust on the London circuit, Adrian kept declining.

As the event at Upper Heyford got under way, the audience went wild. Mostly young American servicemen with a few of our finest English headbangers (you know who you are) to mix things up a bit.

This was Iron Maiden’s finest hour and a bit so far. I remember Dave standing on a table and doing his own rendition of Jimi Hendrix’s version of Star Spangled Banner.

As expected, the crowd went mad and wanted more. I think Iron Maiden did five encores that night, and it became obvious to all of us that the American market for Heavy Metal, and Iron Maiden, was well and truly open.

But the hype was short lived after the fantastic events of the day.

One of the guys travelling with us, and had helped us at gigs a few times, but was never officially part of the crew (and will remain nameless for obvious reasons), decided it would be really funny to take a crap out the back of the truck whilst it was moving. I don’t know whether this guy knew it or not but we were being followed by other vehicles, and yet, amazingly, nothing was ever reported.

It soon became obvious that nobody had any toilet paper or tissues so, being the drunk that he was, he just pulled his pants up and stunk the van out all the way back to the East End of London.

Of course, as soon as we got back to Steve’s, those of us in the back complained about our old friend’s behaviour and he was quickly removed from ever helping us again.

Shortly after this episode, and conveniently during a spell of rehearsals, the Green Goddess got a make-over.

A shutter was built into the side of the truck, allowing access to the side of the vehicle. Once the shutter was raised, I was gobsmacked. A partition had been built in, showing three bunk beds on the right, two bunks on the left, and a huge space above the drivers cab, enough to sleep four people side by side comfortably, but there was always five of us, so most of the time it was a squeeze.

Also, two windows had been cut in the front of the Goddess above the driver’s cab so we could see where we were going. We even had a two way radio fitted, between the driver and the crew compartment, although I don’t think it ever worked properly, especially in one instance I recall requesting a piss stop that I finally got over an hour later.

The space at the top above the cab was where we all felt most comfortable. I don’t know if it was because we could see out of the window or if it was just pure camaraderie, but this was something special with four, sometimes five of us all huddled together in our sleeping bags. It was always such a laugh. The constant jokes and stupidity was endless.

There was this one occasion whilst lying in my sleeping bag that I just happened to look at Doug, who simply said: “Will you look into my eyes when I come?” Murray, Di’Anno and Lights were rolling around laughing, when I said, straight faced: “Go on then.” That was enough to send everyone into fits of apoplexy.

And then there was the occasional brush with the law.

On one occasion we were on our way to do a gig in Newport, Gwent when our journey along the M4 seemed to go horribly wrong. Having missed our exit, Vic decided it would be a good idea to cut across the central reservation, into the oncoming traffic and basically did a u-turn. On the M4???? Of course, it didn’t take long for the police to turn up and pull us over.

With Pete, Vic and Steve sitting in the cab and the rest of us watching through the windows above, the whole situation didn’t take long to get resolved. Vic got a slap on the wrist, but that was all.

I think what remained with me more than anything was the look on the Officer’s face as he looked up at the front of the van and realised there was five of us looking back.

We were quickly sent on our way with a warning. Now, I’m not really sure if the Officer felt intimidated by us watching him, but it was definitely one of the funnier moments of our time spent in the Green Goddess.

Bless her, she got us to places all over the country and, the way things were going, she didn’t have a choice. At the time, with popularity gaining momentum, we were being sent from places like Blackpool to Aberdeen overnight and then back to Liverpool the following evening.

This sort of gigging was the way it was done back in those days. We were getting our gigs through an agency, which would just find us slots anywhere. Much later we got an agency that could find us four or five gigs in close proximity and therefore make a tour worth doing, financially at least. But it took over a year to get that sorted out.

Whilst in Birkenhead doing a gig with a million stairs (in fact I think it was called the Stairway Club, but they forgot to mention the million bit), Paul, using his charm, managed to chat up two local girls and it seemed we were all going to get cleaned up.

Most of us hadn’t had a bath in weeks and our sleeping bags were beginning to smell really bad. Initially, these two young ladies were going to take us back to their place and let us all have a shower, until somebody said something about who was going to get shagged first, and the two girls buggered off and left us to fend for ourselves.

Living off our wits with an extremely limited budget, something had to give.

Being the last date of a mini tour, there was only one thing left to do and the decision was unanimous. We drove straight back to London that night and it was agreed that we would come off the road for a while to recharge our batteries, rehearse the new material that Steve had been working on, and ultimately, look for a second guitarist. 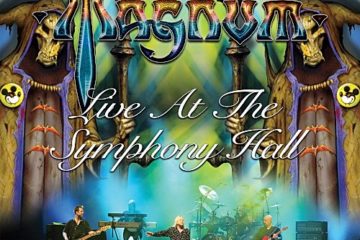