Displaying a high level of musicianship stemming from a broad professional history, American guitarist Mark Tremonti’s recent break into solo work has undoubtedly won the hearts of the rock-loving public. Warping faint threads of familiarity with the thick taint of his own individual creative flair, the resulting blend has offered fans of his previous work an intense, sometimes dark and entirely captivating listening experience. 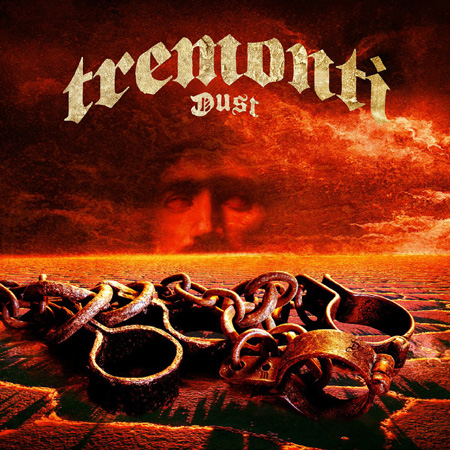 I had the pleasure of wrapping my ears around Tremonti’s third studio album ‘Dust’ a little ahead of its scheduled release.

‘Dust’ announces its arrival with unashamed lashes of musical bite and vigor. The intense energy of ‘My Last Mistake’, ‘The Cage’ and ‘Once Dead’ set the scene with vivid energies, a nod to the driving forces behind ‘Cauterize’ and ‘All I Was’. Signifying another exercise in the gritty guitar work with thick and satisfying vocal melodies, these opening tracks embody everything we’ve come to love in Tremonti’s solo work. ‘The Cage’ draws particular attention thanks to an exciting, guitar-driven opening and a broad, atmospheric chorus.

Right off the bat, it’s evident that the ex-Creed and current Alter Bridge guitarist has no intention of falling away from the spotlight any time soon, and this release comes less than a year after ‘Cauterize’. It’s an impressive leap from the three year gap lying between his debut release and its successor, and I will confess that I had my concerns.

Would this signify a slightly weaker or “rushed” presentation? Would the album consist of little more than “offal” tracks not quite good enough to fit onto ‘Cauterize’? Breaking into the opening content of ‘Dust’, I can see that this simply isn’t the case; as much care and attention has gone into this release as the previous two, and it really shows by the slick presentation and gripping content… even in just the opening 5-10 minutes.

Dropping into calmer waters, the album’s title track flexes a more relaxed tone, giving Tremonti’s vocal chords a chance to really stretch into the foreground. While the more agitated tracks that precede it seem to focus on a foreground painted with an energised guitar presence, it’s tracks like these (along with closing track ‘Unable To See’) that really show the strength and flexibility of Tremonti’s telltale vocal tone and presence. It’s a welcome companion to the instrumental backdrop, and the vocal work displayed throughout ‘Dust’ is better than ever.

The tension rises once more, soaring into ‘Betray Me’, ‘Tore My Heart Out’ and ‘Catching Fire’. Here I find myself singing along in no time to satisfying, simple-yet-sticky chorus melodies, whacking my palms down onto my knees and keeping time with the drone of chuggy chord progressions and driving percussive work. If there’s one thing I can say about Tremonti’s previous releases it’s that they’re great fun to listen to.

‘Dust’ is no exception to this rule, as each individual track has been painted with a slightly different yet highly memorable palette, complete with its own set of sticking points and attributes. Feeling like the complete pieces of a larger puzzle, the assortment of tracks presented here contribute to a much broader and more interactive listening experience. Sure, you can download the odd track to throw into a playlist if you wish, but the album as a whole offers enough animation to entertain from start to finish, dipping and weaving into a broad spectrum of musical grounds.

As ‘Dust’ draws to a close with ‘Never Wrong’, ‘Rising Storm’ and ‘Unable To See’, I find myself smiling broadly and reaching over to cue up the album once more from the top, ready to plunge myself once more into the fray. It’s worth pointing out that there aren’t that many albums out there that can make me do this.

Closing Comments? I’ve been listening to Tremonti’s back catalogue alongside this release, and ‘Dust’ clearly draws upon the experience of it’s predecessors to support itself while daring to take yet another step forward into deeper waters. The arc of progression in Tremonti’s style is evident when comparing his latest release to his previous work, yet his unique and colourful style has fast become a much-loved trademark of his solo material.

I for one mark ‘Dust’ as a strong and highly enjoyable release, and feel that any self-respecting guitar geek or alt-rock fan would be a fool to miss out on this one. Tremonti will be performing at this year’s Download Festival, and I’m most definitely going to be tearing up the crowd, saluting the live performance of his new release with some neck-snappingly aggressive headbanging. Come join me, yeah?