Veteran British AOR band Romeo’s Daughter have never played many shows in Scotland but at their second go round since their reformation in 2009 they have pulled in a good crowd as headliners at Bathgate’s, Dreadnought.

The club itself is an institution with rock in one form or another associated with the Dreadnought name in Bathgate since 1973.

The band launch into the opening two numbers from their classic self titled debut like they really mean business and having seen them several times before I have to say that I’ve never seen singer Leigh Matty looking more energised.

She is dancing and smiling and enjoying the hell out of being on a stage again. ‘Velvet Tongue’ is a surprise inclusion to the set for me but a very welcome one. It showcases the natural AOR groove which is their trademark sound, smooth thoughtful guitar lines and a rhythm section all about the song rather than any flashy playing.

Having showcased the old, the rest of the band’s four album career gets it’s turn in the spotlight and the band are delighted that songs like ‘Bittersweet’ and the catchy ‘Already Gone’ are welcomed as readily as the old favourites by the crowd, many of whom know the band very well indeed.

Their talismanic singer maintains her high energy levels through the set and is a cheery soul when she chats to the audience which isn’t often enough between tunes for me. The vocals are sweet and strong to start with but the smoke on stage and the heat take their toll as the set wears on.

That natural charisma carries them through though and by the time they get to the classic ‘I Cry Myself To Sleep At Night’ the crowd are happy to help out on the singing front. Even with a little wear and tear though I have to say that if there is a sexier sound in music than Leigh Matty singing: “I want to step into the water, and get totally wet”, I have yet to hear it!

An encore tonight is inevitable and after an acoustic interlude the crowd are left happy with a rousing rendition of ‘Wild Child’, a song good enough for Heart to cover back in the day.

Romeo’s Daughter may have been around a long time but in this kind of form they will find plenty of people who want it to stay that way. A really good set and hopefully a headlining show in Scotland will not be such a rare event in the future.

UDO DIRKSCHNEIDER: "IF AC/DC HAD CALLED ME THEN YES, I WOULD HAVE DONE THIS..." - EXCLUSIVE VIDEO INTERVIEW 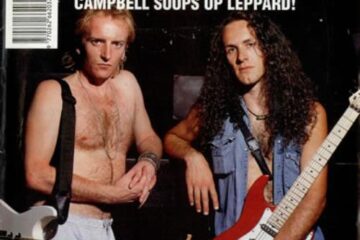