No-one could accuse Joe Bonamassa of not paying his dues. Famously gigging almost non-stop for the past couple of decades, in that time he has become an authority on blues rock and the premier performer of the genre today.

What sets him apart is his ability to put his own stamp on things, like the very greats he pays tribute to – never emulating, and that is the vital difference between Bonamassa and the dozens if not hundreds of blues-rock guitar bands on the circuit. A good piece of blues rock played well is a wondrous thing, to be in the presence of a master is an ascending experience.

Having previously played tribute shows to Muddy Waters and Howlin’ Wolf in 2014 and then the three Kings – Freddy, Albert and BB – in 2015, tonight it is the turn of the Brits. The British Blues Explosion occurred in the 1960s when the hot young talent of the UK took niche American music back over to the Americans and brought it into the mainstream, an act that brought belated recognition to the aforementioned kings.

Of the many names of this movement three of the main players, Jeff Beck, Eric Clapton and Jimmy Page, were in the spotlight tonight.

Many styles are covered between these three – Clapton’s pure, virtuoso playing and extended soloing, Beck’s experimental approach and Page’s heavy and mystical edge. Bonamassa has already integrated these aspects and more in his solo work, outings with Beth Hart and of course with Black Country Communion.

The blues has a definite structure to it, there are scales, progressions and notes that need to be present. With these limitations you have to do somethings really special in order to stand out from the crowd. Even with the amount of covers and tributes imbued through his career, Bonamassa, with a back catalogue comprising of fifteen solo albums and many individual compositions, is a vitally important part of the current blues scene and the genre as a whole having developed his own style, blending the old worlds with the new.

The setting for tonight was really quite something, and in its own way showed the merging of different worlds. The stage was set up in the courtyard of The Royal Naval College, with its grand architecture on all sides. Among the food concessions was a champagne and oyster bar. In the open corner between the stage and the end of a building the largest privately owned residential yacht The World was visible, docked on the river during its current stopover in London and just a few hundred yards away from the historical Cutty Sark.

The audience was also divided between those from the rock and Metal community and plenty of a more genteel persuasion. In this setting listening to the urban blues invoking memories of Chicago and Chess records plus the London scene of the 60s there was no conflict, everything merging beautifully into a unique experience, all factors happily sitting side by side. 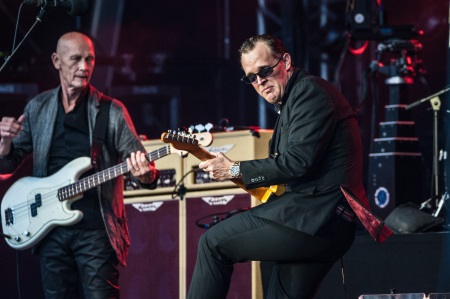 First up was Joanne Shaw Taylor, a leading light of the current British blues scene. Starting with the uptempo ‘Mud, Honey’, the trio of Joanne, with drummer Oliver Perry and bassist Tom Godlington gave us seven tracks of class.

Joanne’s guitar playing is as fluid as it is sharp, she has a magic touch and a satisfyingly hard edge, absolutely nailing the slow honeyed tones of ‘Tried, Tested And True’ and the blistering energy of ‘Watch ‘Em Burn’.

Her vocals are top-notch too, with suitably husky tones tempered by a rich mellowness, showing once again that the spirit of the blues found a true home in the Black Country. This was an exemplary set, marred only by the low sound levels, which needed to be turned up considerably. Joanne is on the road a lot so there is no excuse not to get out and catch her, you will be handsomely rewarded.

On to Joe Bonamassa who ripped straight into ‘Beck’s Bolero/Rice Pudding’ with little fanfare and much flair. Tonight the band were a five piece, made up of A-list names and performance to match. Russ Irwin provided additional guitar, vocals and keyboards, while Letterman mainstay Anton Figg occupied the drummer’s stool. Michael Rhodes took care of the bass and Rock and Roll Hall of Fame inductee Reese Wynans covered piano and organ. 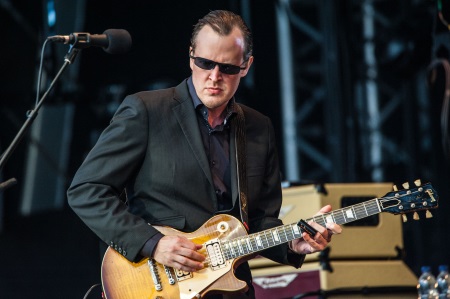 The set was gratifyingly made up of less popular songs from the back catalogue of the greats, and having a break from the usual suspects served to ramp up the appreciation of the quality and the talent.

Changing up the styles, along with having a different guitar for every track, Bonamassa achieved the balance of history and tribute while staying true to his own individuality and the set never once felt dated.

There were so many highlights, and the first spine-tingling moment came with the boogie-woogie piano on Led Zeppelin’s ‘Boogie With Stu’. The keyboards also came to the fore on Beck’s ‘Plynth’, where the band kept up the beat as Wynans generated breathtaking melody lines and progressions during the solo.

Clapton’s clean edge was demonstrated with ‘Motherless Children’, however the opposite end of the scale was also here with Cream’s ‘SWLABR’ (she walks like a bearded rainbow) where the psychedelic edge was present.

Joe and the band were clearly hitting all the right spots as the sky decided to join in with a spectacular show all of its own. As the sun began to set, displaying glorious colours and shapes, for a couple of minutes the clouds formed a perfect arch to frame the show with. With their fluffy nature, we had our very own bearded rainbow joining in – sheer magic.

Who knows what a bearded rainbow looks like? We think this is pretty close… Photo by Liz Medhurst

With ‘I Can’t Quit You Baby’, the big heavy arpeggios at the start made way for the dreamy main part which was not as self-indulgent as the orginal. The vocals were smoother than Plant’s but still it contained space and danger. The violin sounds during the quiet solo section were achieved with no bow in sight, and with just the smooth hum of the Hammond behind it was nothing short of rapturous.

It was also Zeppelin who closed the main set with a double whammy, and the final track ‘How Many More Times’ had everyone dancing and grooving, albeit interrupted by a drum solo. 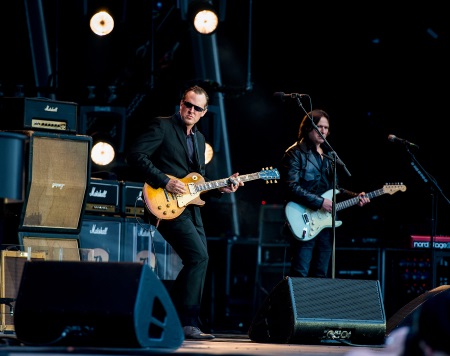 Returning for the encore of ‘Sloe Gin’, Bonamassa stated that he wanted to give the crowd something familiar after a whole set of never before played covers. It was a brave move to do a set like this without falling back on old favourites, which presented a challenge for band and audience. He pulled it off with brilliance though, and this band can rightly claim to be among the best of the best.

This tribute made perfect sense – an appreciation of where we came from and where we are now. In a couple of generations’ time we will be seeing new blood playing a tribute to Joe Bonamassa compositions, perhaps even playing the hell out of a Theremin as in ‘The Ballad Of John Henry’. The blues world keeps on turning and evolving, rightly so. 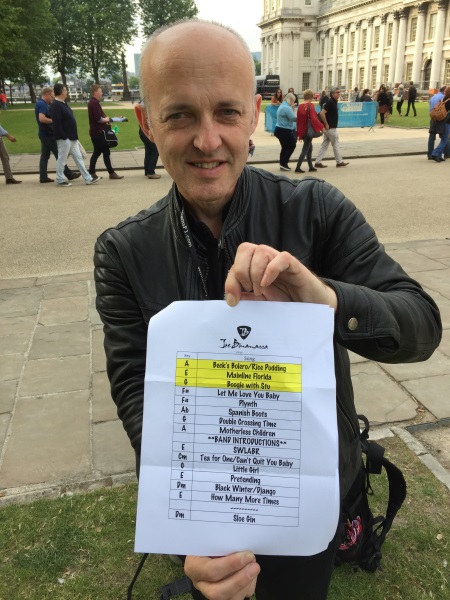 Kaviani / Watch the haunting version of 'Even The Losers'