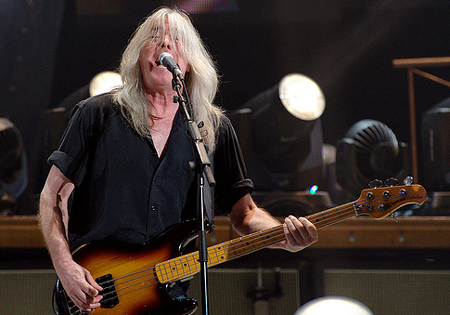 Long time AC/DC bass player Cliff Williams has announced that he is to retire from touring and recording at the end of the current Rock Or Bust World Tour which re-commences in Greensboro, North Carolina on 27th August and finishes up in Philadelphia on 20th September.

This means the gig at the PA Wells Fargo Center in Rocky Balboa’s home town will be Cliff’s swansong performance and will bring down the curtain on his 39-year career with the rock legends.

Cliff revealed his decision to Gulfshore Life magazine of Naples, Florida which we think is an ultra cool way to disclose such massive news because it’s not a music magazine, although the few music articles they publish are of an impressively high standard.

Cliff’s announcement is within a very interesting article featuring well known musicians who have moved to the Florida area and can be found in Gulfshore Life amongst articles titled Beauty Tips For Steamy Florida Summers, Floatation Therapy Comes To Southwest Florida and a feature discussing whether polka dots and checks offer a cool retro feel for summer.

Cliff had the following to say about his decision: “It’s been what I’ve known for the past 40 years, but after this tour I’m backing off of touring and recording. Losing Malcolm, the thing with Phil and now with Brian, it’s a changed animal. I feel in my gut it’s the right thing.

“When you start out, you kind of hope for success. That’s what you are working for. But you never really know. It’s been surreal, really.

“AC/DC has been… you know, just… I don’t know what else I would wanna do. I love the music and I love playing in the band, and I’m all filled up.

“My role as part of the rhythm section is to give drive, to give foundation, and engine, if you like, support the guitars.

“My first album with the band was ‘Powerage’ and that was 1977. It was all new and fresh, and these people, I didn’t know them, and Australia, and I’m from London, and there was the whole fitting in thing. They were great — very accepting.

“They were very famous in Australia when I joined them. They’d pretty much gotten to the top of the heap there very quickly. And they’d been to Europe once or twice at that point too. But we were still touring on a modest basis. We were playing small venues with little equipment, with a little van, and we were all driving together in a station wagon and stuff. And that, over the years, has changed. Not to say it wasn’t fun; it was a lot of fun.

“The first tour bus was an old piece of junk driven by a seriously overweight good ole boy who called himself Jesse James to which we added the words ‘the fat-assed’ to. He would work the CB radio and announce himself onboard along with the rock group ‘AC/DC outa England’ to anyone listening. He never did get the fact it was from Australia but then he may have thought that was in England.

“This bus life progressed for years to better buses that would not break down on your one day off to flying commercially and having your own hotel room. We lived on the road permanently in those days, with time off for recording a new album and always Christmas and New Year off for sanity.”

AC/DC’s upcoming North American dates are the third and final leg of the Rock Or Bust World Tour and will be the band’s first American concerts with Axl Rose on lead vocals. Axl will be fronting the tour just five days after Guns N’ Roses complete their current Not In This Lifetime Tour which you can read all about right here.