Taking the plaudits after the triumphant Soldiers Field performance…

For the second time this summer, Axl Rose has confounded his (misguided) critics and produced the goods in fine style.

After fronting AC/DC for the hugely successful Rock Or Bust World Tour blockbuster second European leg which ended in June, Guns N’ Roses have now hit the road in the USA for their Not In This Lifetime tour which sees Axl reunited with original members Slash and Duff McKagan.

A previously unannounced warm-up gig featuring the “new” line-up took place at the Troubadour in Los Angeles on April 1st (read all about it right here) before the Gunners headlined the ginormous Coachella 2016 event in front of an audience of 70,000. Two gigs each in Las Vegas and Mexico City followed in April before Axl joined AC/DC and the Not In This Lifetime Tour kicked off in Detroit on June 23rd.

The multi-gazillion selling, mass award winning band who have been a major influence on a countless number of “modern” artists are now five dates into the 25-date tour and so far the whole expedition could not have gone better, according to our contacts within the GNR camp.

Axl and Slash were estranged for the best part of two decades and for most of that time it really did seem that a reunion would not happen in this lifetime but Slash recently told Team Rock: “Everybody’s playing nice. Everybody’s getting along and playing great, and the shows have been awesome.

“We were all pretty positive that it would never happen so it’s still sort of blowing our minds. It seems so surreal to me, you know. But everybody’s getting along great. I think everybody’s come a long way and it’s all cool.”

That, along with reports that Axl is enjoying posing for pictures with fans and chatting jovially with them and that the whole band have broad smiles on their faces, is great news and bodes very well for the future of this legendary act. It’s also a lesson in life that if Axl and Slash can put their differences aside and move on from the past in the most positive way then all things are possible. Certain politicians and world leaders should take note and learn from yet another good example that rock n’ roll is setting. 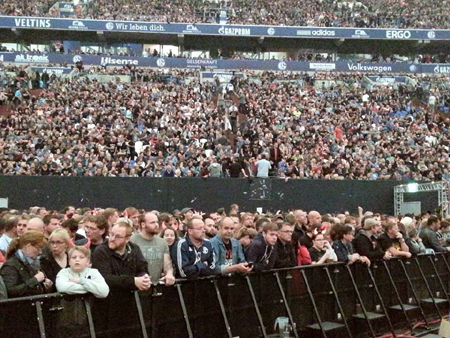 An expectant crowd at Soldiers Field. They were not disappointed…

And as for the future, well it’s going to be big and we are incredibly excited about what we will be revealing later this year.

Everyone has heard the insufferable negativity that preceded the Not In This Lifetime Tour from some quarters but as with the AC/DC tour, the Gunners have shot the barbed comments down in flames, the best example being Friday night’s gig at the iconic Soldier Field in Chicago when the band took to the stage fifteen minutes earlier than scheduled.

Axl is clearly in his element on this tour, running across the stage to jump on the monitors mid-song and displaying all the panache of a man completely on top of his game and there is an undeniable air of mass excitement in each new city that the tour arrives at.

Guns N’ Roses are giving opportunities to several significant support bands on the tour. Alice In Chains have just completed a five date run and the remaining dates will see either Wolfmother, Tyler Bryant And The Shakedown who supported AC/DC on their aforementioned European run, Lenny Kravitz, Chris Stapleton, Billy Talent and The Cult all in action.

If you’re too young to recall the heyday of ‘Appetite For Destruction’ (one of the greatest rock albums ever written in the history of the planet), ‘G N’ R Lies’, both ‘Use Your Illusion’ albums and ‘The Spaghetti Incident?’ between 1987 and 1993 then there’s a selection of tracks under the tour dates below that show just why Guns N’ Roses have deservedly been held in such high esteem for three decades now.

Britain may have left Europe recently but Guns N’ Roses should be entering it at some point for a full scale tour and there is no doubt at all that on this form they will conquer.

The current line-up of Axl, Slash, Duff, guitarist Richard Fortus, drummer Frank Ferrer and Dizzy Reed on keyboards along with second keyboardist Melissa Reece are partying like it’s 1989. This band really are one in a million.

Previous article
Lawyer Who Sued Led Zeppelin Is Dazed And Confused After Being Suspended For Multiple Violations
Next article
AC/DC Bassist Cliff Williams To Retire After Rock Or Bust World Tour: “It’s Been Surreal”