Motörhead frontman Lemmy is being honoured by the German Postal Service who have released a range of stamps in honour of the late icon.

The collection is the result of a partnership between Deutsche Post and the German newspaper Bild. The stamps are only available in Germany and a book of ten stamps can be purchased for €10 via the Bild newspaper web site.

The newspaper said: “The German official post office, Deutsche Post, together with Bild are honouring our beloved late Lemmy Kilmister with an official set of German postage stamps for standard-size letter. One stamp package contains ten stamps, five Lemmy motifs in total and everyone can compile the stamps the way they like.

“These stamps are limited to 7,777 — Lemmy’s lucky seven — and will be available for four weeks only, between May 17th and June 17th.

“A great artist, a gentleman, an honest and loyal person, an icon for many and an inspiration for his fellow artists and fans.”

Lemmy is due to be honoured at next month’s Metal Hammer Golden Gods show at Hammersmith Odeon in London, when surviving Motörhead members join forces with Saxon for a tribute. 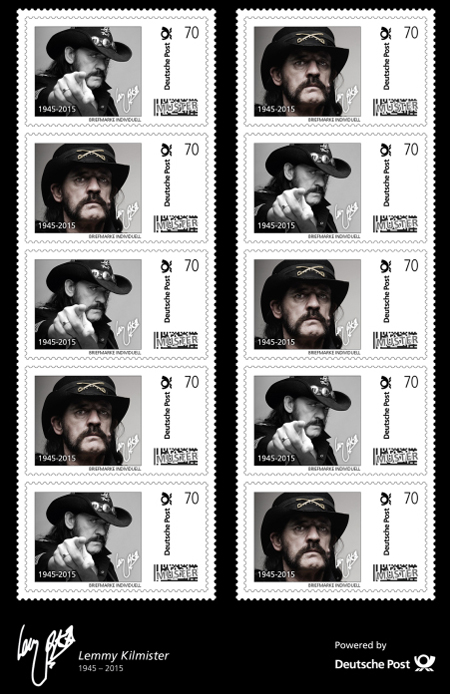 “Cause it’s only, love for sale,
Heart of gold and hard as nails,
I can’t believe it’s legal,
To send it through the mail,
Only love for sale”

Previous article
SECOND TIME AROUND: MIKE TRAMP IS STILL AT THE TOP OF HIS GAME
Next article
MTTV EPISODE FIVE: GUS G