Even the wet weather couldn’t dampen the spirits of the thousands who descended on Wembley this weekend, all highly anticipating a huge dose of American entertainment courtesy of a trio of rock giants. The fans donned their trademark mullet wigs and leopard print lycra to celebrate the return to Wembley Arena of the mighty Steel Panther.

Los Angeles anthem makers Buckcherry were given the honour of opening up for Texan heavyweights Bowling For Soup and rock animals Steel Panther. A huge crowd had already gathered at 7.00pm awaiting the appearance of Josh and the crew. As the houselights dimmed and the first Cali style chords thundered through the auditorium the masses got their power punching fists out. 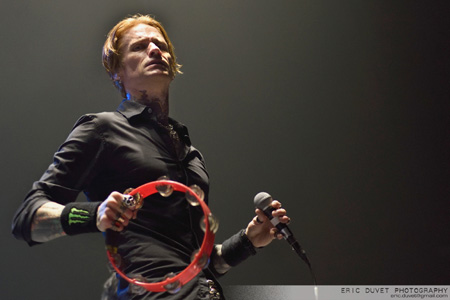 Buckcherry took to the stage like the true pros they are. With Josh Todd’s hips hypnotically swaying in shapes that both Jim Morrison and Scott Weiland would have been proud of, the combined guitars of Keith Nelson and Stevie D powered into a regrettably short set accompanied by thunderous drums and bass. The cross dynamics of spandex, denim, short leather skirts and men in multi coloured wigs was spellbinding, heads nodded, arms in the air and Buckcherry meant business.

The only thing that marred this classic performance was an appalling backline but when the anthems started flowing, who really cared?

“How y’all doing, London?” rasps Josh, as the band’s jackets come off and their tattooed, tanned and toned bodies are exposed. This definitely lit up the ladies, as did this their epic first hit and by the time Icona Pop’s ‘I Love It’ is given the BC Treatment, the standing only area has metamorphosized into bouncing room only and ‘Say Fuck It’ reverberates around and around the venue. Seating becomes standing to this anthem for our generation. 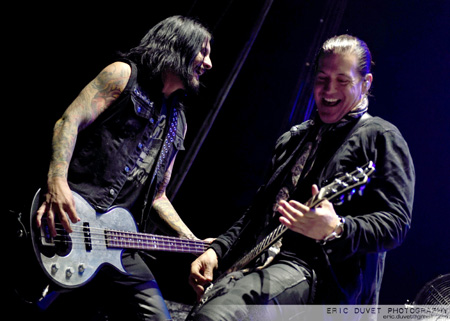 But of course this night was about only one thing for Buckcherry, the anniversary of ’15’ and with a raw rolling “Ahhhhhh Yeeeeeaaaaaaaahhhh,” the opening chords of the song that has become the ultimate go to song for Rock chicks everywhere was unleashed. True to form all the Crazy Bitches were exploding into backing vocalists and grinding along with abandonment.

The rest of the set is much of the same – their greatest hits rolled into thirty minutes. 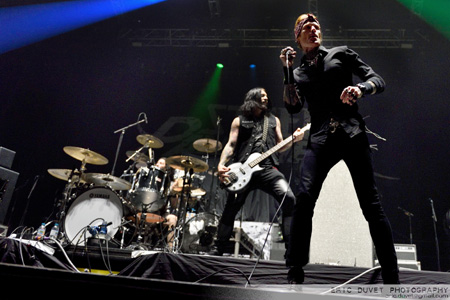 There was an honourary mention to bassist Kelly LeMieux, whose Leukaemia is currently and thankfully in remission. The ‘Fuck Cancer!’ t-shirts couldn’t have put it any better. Buckcherry salute the intoxicated crowd with “We love you London!!!!” and the show is over far too quickly for many, including me. A few songs short of a perfect setlist and a triumphant battle against shoddy sound, this was nonetheless a true Cherry Bucking experience!

It was pretty unanimous that it should have been Bowling For Soup opening up instead of Buckcherry as despite packing on some serious weight, tonight the band just weren’t big enough to take on Wembley, their comedy capers and cartoon classics better suited to smaller venues.

As frontman Jaret takes to the stage, the crowd gasp at how much weight the singer has put on. He jokingly announces that, yes, he has packed on the pounds but this is because he has eaten all of Buckcherry. This gets a few laughs and sets us off nicely into their set.

‘Girl All The Bad Guys Want’ is the big opener and it’s a great choice as it soon has us singing along and laughing at 33 stone Chris Burney’s dance moves – Britney has nothing on this dude. And also his killer plectrum juggling skills – I’m sure Chris could audition for America’s Got Talent. Up next is that perfect slice of pop punk, ‘High School Never Ends’, keeping the spirits aloft. 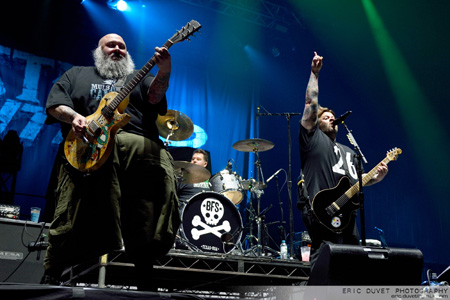 Then into their trademark tune-up innuendo taking the piss out of super skinny Buckcherry, Chris revealing that the dude fans are cracking off at him, Jaret revealing his favourite word and he’s been dying to say it at Wembley and of course that word is “Cunt”, they go on to banter about their wet Man-ginas. There’s was more innuendo here than Sid James and Mark Taylor in a Carry On Wembley film. Finishing off the top shelf, ‘Bants’ is BFS dedicating the tune to their home state of Texas, Ohio.

Back on with the polished pop punk and ‘Almost’ is up next and the band do their best to get the crowd participation going. Then it’s on to the new album promotion so we get the stereotypical “our new album is out, go buy it and here’s the first single from it”. Expecting to hear a great new anthem, it’s disappointment all round with ‘Dear Diane’. Known for their melodies and lyrics, this isn’t a patch on early BFS songs that we love so much. 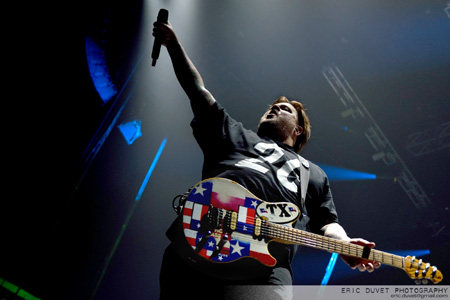 Jaret takes to the mic again to let us know that they get told all the time that everyone thinks they sang ‘Stacey’s Mom’ (pub quiz question for you – who really did release this one hit wonder?). So to make some money on it – they’ve added it into the set. But it’s not that great.

‘Punk Rock 101’ brings the band back into business and as always they break it down with a photo opportunity, more banter and then kick back into their evergreen anthem. 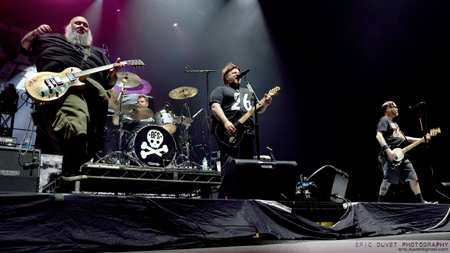 Then its time for their ‘Bitch Song’ and in fact, all three bands love this B-word so much, this tour really should have been called The Three Bitches Tour. ‘Bitch Songs’ has us smiling along but it’s probably more to do with the £6 lagers kicking in.

Then it’s a quick nod to their cartoon song and the whole BFS set culminates in ‘1985’, a great song, lots of nostalgia for us but how relevant is this all is in 2016? The band can’t believe they are playing Wembley but I just don’t think this is the place for them. Bring back the old days of BFS at Rock City and a nostalgia fest for us 40-year-olds every now will always be good.

So the lights dim for the final time and the Kiss classic, ‘I Love It Loud’, pounds out as this generation’s Spinal Tap take the stage. The Steel Panthers are ready to roar.

‘Eyes Of A Panther’ blasts its way out of a much improved backline and with more spandex than a David Lee Roth aerobics session and more bandanas than a pirate convention, this audience was begging to be destroyed.

The power poses, thundering drums and pseudo-nihilistic vocals were all there as the six-string slingers wove a web of energy and the bass thundered out, in-between checks in the mirror of course. Michael Starr was crude, rude and unashamed as the ageing rockers botoxed their way through a set of rock’s finest(?) and sexy(ist) stand-up comedy!

‘Asian Hooker’ and ‘Smells Like Sushi’ are unleashed upon the expectant throng who seem oblivious to the fact that we’ve heard it all before last year at Wembley and it was much better then. Yes this show had the usual Steel Panther ingredients – the wanton sex acts, the titty cam, the chauvinistic lyrics, the interband banter, the spandex splitting side kicks, the usual Oscar style acceptance speeches of gratitude after every song but it just all seemed a bit lacklustre. These cats were purring rather than roaring.

This year there was no big production, no screens, no midgets, no gimmicks – it was Steel Panther just being the band Steel Panther but they are no Def Leppard, Whitesnake or Motley Crue. And this is why they need to keep the theatrics and the extras and not rely on the odd song to show their ‘musicianship’.

Don’t get me wrong, the Panthers still rock but maybe they were knackered, a bit bored, or just getting a bit long in the tooth.

By the time ’17 Girls’ was hammering at our ears and a drunk riverdance spectacle of female Panthettes were parading around the stage, the big cats of Glam had the entire Wembley fanbase seemingly lapping it up but how much of this was us all wanting or wishing it to be good?

This Hollywood Hills party on tour wound to a close like the old man in Family Guy chasing Chris, the doddering old pervert.

Most fans were left reminiscing about having seen Steel Panther when they were good. A fun, but slightly frustrating show but as Steven Tyler once said, the band obviously needs a bit of a hiatus – it felt like they were ‘just making the doughnuts’.

The stars of the show were Buckcherry – maybe BFS and Steel Panther could take a look at how the underdogs and not the pussycats do it. 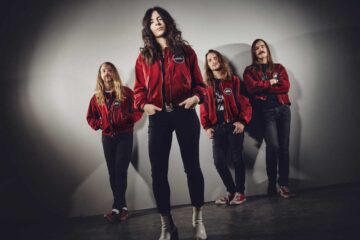