It is ‘Strange Days’ indeed, as The Struts release their third album without the benefit of being able to back it up with one of their explosive tours, of which they are so well know for.

Recorded over a ten day period in Los Angeles at the home of Producer Jon Levine, we are presented with nine original tracks, plus a cover of ‘Do You Love Me’, taken from the Kiss album ‘Destroyer’, a track written by Paul Stanley, Kim Fowley and Bob Ezrin.

Opening up with the ballad ‘Strange Days’, featuring former Take That geezer, Robie Williams, The Struts have never had a problem linking up with the big names in show business. Having opened in the past for the likes of The Rolling Stones, The Who and Guns N’ Roses in the past, for ‘Strange Days’ the album, as well as Robbie we see performances featuring Tom Morello, Joe Elliott, Phil Collen and Albert Hammond Jr.

The album starts off ‘proper’ with the second track ‘All Dressed Up (With Nowhere To Go)’, where we get full blown Strutting action, with a dirty rocking riff from Adam Slack propelling us into this stomping song, in that style which The Struts do so well.

Kiss track ‘Do You Love Me’ follows, which is a fine version of the original, but you kind of know that the track has been included with the stage in mind. The last forty seconds has Spiller asking “Do You Love Me?” and you can sense him strutting around the stage asking this question to various sides of the audience.

Track Four begin with thirty seconds of Spiller and Def Leppard’s Joe Elliott chatting on the phone, before moving into what is a really good track, bouncing on with one of those super Strut’s choruses and gritty guitar solos.

‘Wild Child’ is another collaboration song, this time with Tom Morello and this is a standout track. Slack’s fuzz-infused riff is beautifully Heavy and the track stomps along in some great style.

Six tracks in and we get a clean run though to the end, with no other distractions. The Stones influenced ‘Cool’, which would have been a better opener, stomps along nicely leading to the highlight of the album, the Bluesy ‘Burn It Down’.

This track showcases the power of Spiller’s powerful and passionate vocal, with a wonderful moody, brief and perfectly fitting Slack solo.

The final guest on the album is Albert Hammond Jr, from The Strokes, who plays guitar on the track ‘Another Hit Of Showmanship’.

The track was built on a Brit-pop styled riff from Adam Slack and after recording the initial track, Hammond came in to add his touches.

Spiller explains: “‘Another Hit of Showmanship’ reminds me of being at a club night called Ramshackle years ago at the O2 Academy in Bristol, where they would play bands like The Libertines. Razorlight and Scissor Sisters and of course The Strokes.

“I hit up Albert out of the blue and told him, ‘We’ve got this song and I’m so excited to see what you would do with it.’

“As soon as he got his hands on it, he took it to a whole different level — it really just shows why he is so brilliant at what he does.”

The album finishes up with ‘Can’t Sleep’, with it’s manic finish and the phenomenal, moody ‘Am I talking To The Champagne (Or Talking To You)’.

This is a great album, showcasing The Struts wonderfully in that unique style that we all love.

Maybe I’m an old fart for wanting the first half a bit less disjointed, but that is from a place that an album should be played from start to finish, only pausing when you have to flip the vinyl over half way through.

But thats not way people listen to music these days.

The saddest part is the length of time we are going to have to wait to see this album covered in full blown Live Struts glory and with this band, it is the live scene where they raise their standards above many of their peers.

The Struts will play four intimate dates in March in conjunction with local record shops. Billed as ‘An Acoustic Evening With The Struts’ tickets are available as an album/record bundle from the retailers below.

Spiller says: “We are very excited and happy to announce we will be bringing you some exclusive acoustic performances in our home country of the UK. We cannot wait to see you all again.

“We will be playing new material plus your favourite songs. We hope you enjoy our new album because guess what … we wrote it for you. x.” 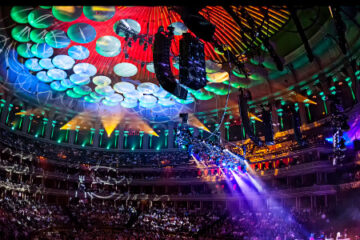