The first of Gunslinger’s last four UK dates saw the Suffolk based three-piece going totally in for the kill and leavin’ Hitchin with one of the best performances ever seen at the impressive Club 85.

At just a half hour’s train ride from London, it’s a surprise having experienced Club 85 that more noteable bands don’t play here and that it isn’t part of the regular circuit as with great hospitality, cheap drinks, a late bar and a superb sound and view, it makes some of the capital’s venues look strictly second best.

Support band Guns Of Anarchy put on a fiery display of high octane rock’n’roll with frontman/guitarist Ollie Tindall looking every bit the part and reminding of a young Steven Tyler or Axl Rose as the Watford-based four-piece took no time at all to win over a crowd mainly attired in Hawkwind and Motörhead regalia. 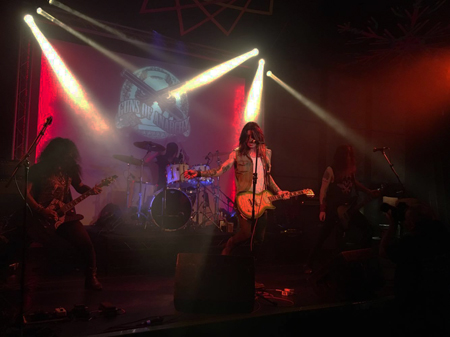 Guns Of Anarchy have a very cool repertoire of songs, all of which walk the walk and talk the talk and Ollie is backed up by a very tight band who have the looks, the swagger, the tunes and the confidence to really go places.

“Loud, mean and mighty unclean,” is Guns Of Anarchy’s motto and you better believe it because these boys really mean business and seriously impressed at Club 85 tonight.

However, nobody was going to steal the limelight from headline act Gunslinger, who really would have made Lemmy proud tonight with a storming set that reminded just how great Motörhead were in their very early days, and then some more. 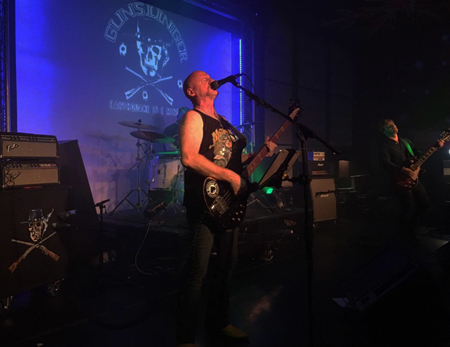 This was officially billed as Gunslinger – Ace Of Spades, due to the band’s wish to play select Motörhead classics due to popular demand after the recent Ace Of Spades shows.

However, this was not only about paying tribute to Motörhead as Gunslinger are a force to be reckoned with in their own right as anyone who has taken time to listen to the ‘Earthquake In E Minor’ album will testify.

Alan has recently signed a ten-year deal with Cleopatra which will see Gunslinger continue Stateside with a remastered ‘Earthquake In E Minor’ and many other goodies all set to see the light of the day in the coming months. 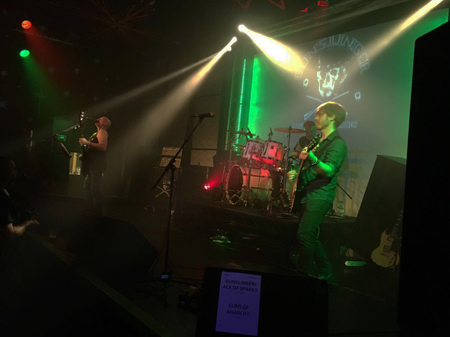 In the meantime, it’s still hard to believe that this was amongst the final handful of opportunities we would have to see Gunslinger in the UK as a more solid and meaningful performance you could not wish to have experienced.

Seven Motörhead covers were included in the set, amongst them ‘Limb From Limb’ and ‘Leavin’ Here’ which a lot of punters thought they would never hear live ever again. ‘Iron Horse’ and ‘Train Kept A Rollin” also delighted, primarily because they were played superbly well with note-for-note precision.

Ten of the eleven cuts from ‘Earthquake…’ were aired tonight which left only ‘All The Way’ standing alone as not an ‘Earthquake…’ cut or Motörhead song. Guitarist Louis Davey really excels on this ultra-bluesy number as it’s the perfect showcase for his lead skills which really do deserve a special mention. 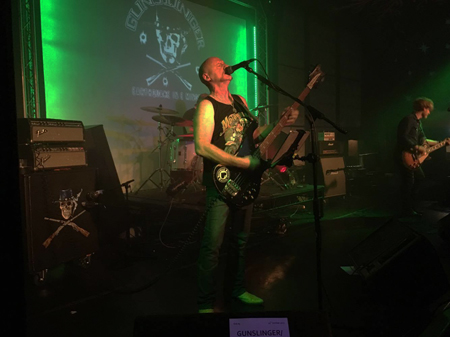 The ‘Earthquake…’ songs were written and released way back in 1981 and have easily stood the test of time and America is in for a treat when Gunslinger bring their iron horse to town.

England has two more chances to see this very special act, in Newcastle-Under-Lyme and Nottingham next Friday and Saturday respectively, before Ace Of Spades resume their schedule with shows from November through to January.

Whether Ace Of Spades play any Gunslinger material or keep it completely Motörhead remains to be seen but either way, you are guaranteed an excellent night of quality musicianship and the best rock’n’roll you can imagine. We definitely want more!

MetalTalk spoke at great length with Alan about the Cleopatra deal, the forthcoming Gunslinger releases and much, much more including some never-before-told stories of his involvement with Motörhead mainman Lemmy.

You can find out the whole lot right here.