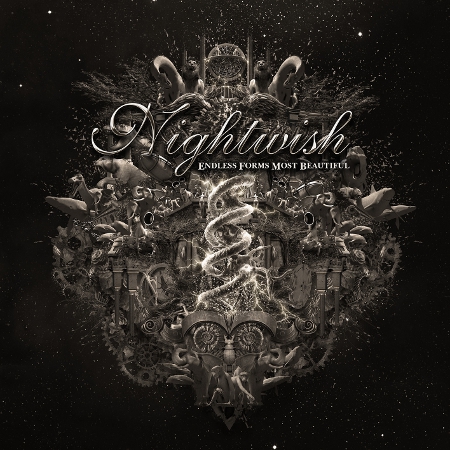 Symphonic Metal is in itself a melodramatic kind of Metal which thrives on bombast and contrasts and tries to carry it’s audience away with dramatic sweeping grandeur. With over eight million album sales to their credit Finnish Metallers Nightwish are at the very top of the genre despite over the last few years having as much drama within the band as in the music.

Their acrimonious split with original vocalist, soprano Tarja Turunen, took place just as her last album with the band, ‘Once’, broke them onto a new level with over a million copies sold worldwide. The recruitment of the very different Annette Olzon as her replacement split the fanbase but somehow didn’t hurt the sales of next album, ‘Dark Passion Play’, which went on to sell even more copies.

Band leader and main songwriter Tuomas Holopainen isn’t one to stay on safe ground so the next release, ‘Imaginaerum’, was not only a concept album but there was a movie based on the story too. On the subsequent world tour there was more drama with their vocal role and Annette Olzon was unable to perform some shows due to illness. This seemed to bring differences to a head and Olzon was sacked and replaced at very short notice for the tour by Dutch singer Floor Jansen, known for her work with After Forever and now Revamp. Floor performed admirably and fronted the band on their live dvd ‘Showtime, Storytime’ recorded in front of 80000 at Wacken Open Air.

All that drama out of the way, Floor Jansen is now a permanent member of the band, added along with multi instrumentalist Troy Donockley and the much anticipated ‘Endless Forms Most Beautiful’ album is here.

Holopainen has once again written most of the music and lyrics and this time there is a loose concept running through the songs related to science and the power of reason. The album’s title is taken from a phrase in Charles Darwin’s book ‘On The Origin Of Species’ and there are even spoken word contributions from controversial scientist and author Richard Dawkins.

So far so epic then, but what about the music and the vocals? Taking the musical style first the real shift in style for the band came with ‘Once’ which was less about soprano lead vocals and more about accentuating the orchestral and Celtic influences which have always been there, along with that Metal edge.

The addition of Troy Donockley, expert player of uilleann pipes and other traditional instruments signals how important the Celtic influences are now and with a full orchestra on board arranged by long time collaborator Pip Williams this sounds like the culmination of all the progress on the last couple of albums. Heavier in some places but laced with huge amounts of subtlety and with a sound which is unmistakably their own this is an album of musical contrasts which makes a huge satisfying whole.

The vocals are always a point of conversation on any new Nightwish material and so the question will be how well does Floor Jansen do on her first album with the band? The inevitable answer for me is very very well indeed.

I expected no less as she is a singer of the highest quality with a huge and fabulous voice which shows amazing range and technique. Aside from a mystifying need to show she can growl too with Revamp she has all the power and range anyone could need in a female singer and showed on the live shows that she can sing both Turunen’s and Olzon’s styles equally well.

What is surprising here are the quiet moments and subtlety the songs require from her. Exploring using her instrument in a softer more intimate way reveals yet more layers of talent from the amazing Dutchwoman although I’m not sure how well that subtlety will work when it comes to performing the songs live.

Probably the most important thing about any album however is the songwriting and with opener ‘Shudder Before The Beautiful’ they get off to a great start. After a short spoken word introduction from Richard Dawkins the song bursts into life with that typical loping Metal riff style that they have.

The song settles into subtle verses with the vocals a little low in the mix for me but bursting out when the guitars come flying in on the choruses. Nice to hear an old school touch with the guitar and keyboards both doing solos plus terrific interplay Deep Purple style. By the time the orchestra and the choir join in as the song builds it’s impossible to resist a grin at how gloriously over the top it all sounds.

‘Weak Fantasy’ is the band at their heaviest with a chugging riff but once again there are restrained verse sections. It feels like Floor is holding back those mighty lungs and just lets them off the leash at chorus time. With acoustic guitars on the verses versus chunky riffs on the choruses this is a fine example of Halopainen’s use of contrasts and this continues with the Jansen sharing vocals with Marco Hietala in the latter part of the song.

‘Elan’ was the first song released from the album so fans will know it as a gentle yet catchy tune which is restrained in style but carried on the lovely melody line for the vocals plus for the first time on the album the Celtic influences really get involved. Not an immediate hit with me, this is a song which grows on you over repeated plays.

Pip Williams’ orchestra introduces ‘Yours Is An Empty Hope’ to us before Emppu Vuorinen’s guitar takes over and we get another high energy number but again full of nuances and subtleties and changes of time and musical emphasis. Complex stuff but made to hang together very well. Further down the female fronted symphonic Metal ladder but gaining fast are Epica. Both bands have a way of making complexity work in their songwriting and are not a million miles apart on this track.

‘Our Decades In The Sun’ is a different beast entirely and is as close to a ballad as you get here. It is beautifully put together and those shimmering lead vocals from the Dutch frontwoman are just wonderful. Proof if any were needed that she can do soft, gentle and emotional with aplomb.

Troy Donockley’s uilleann pipes get to shine on ‘My Walden’ which is Nightwish going Celtic sounds meets Viking chorus with more of those restrained verse sections which seem to be all over this album. Halfway through the vibe of the song changes into something akin to a jig with fiddles and pipes which sounds great.

The title track has the orchestra and the guitars trading riffs before becoming a more traditional galloping Nightwish song, however while it’s interesting musically I don’t feel the chorus is strong enough to carry the song and it’s when the instrumental sections raise the dramatic edge it becomes a more interesting tune.

‘Edema Ruh’ is another song which kind of glides along, this time on some keyboard hooks and some lovely flowing guitar lines. There is another pretty lightweight chorus though and personally although it’s catchy and memorable I would have liked those sections to be more forceful and uplifting. The rest of the song is really good though.

‘Alpenglow’ is another song based on the interplay between the guitar and strings and again has some great instrumentation but comes across as understated at times. It’s the bombastic sections that really hit home rather than the chorus and I think that this might have felt like a more complete entity if they had let their singer really cut loose on those chorus sections.

You would think Messrs Jansen and Hietala would get to give their vocal chords a rest on instrumental ‘The Eyes Of Sharbat Gula’ but it features some distant voices in the background and is very pretty and atmospheric. In the end it just comes over as an intro tape set up though and doesn’t add a huge amount to the album for me.

The album is closed in typically over the top style by the longest song Nightwish have ever done, the near twenty four minutes of ‘The Greatest Show On Earth’. This could easily be described as a prog rock opus with it’s five sections and spoken word parts from Richard Dawkins and to be truthful that’s what it feels like.

There are long instrumental sections and lots of orchestration but every so often Nightwish the Metal band burst into life in the midst of it all. I actually really like it but it may confuse some people as it doesn’t really fit into the expected Nightwish soundscape in places. I do like that some of Ms Jansen’s strongest vocals on the album are here; it’s good to hear her voice near to it’s full power.

There is a lot to take in on this album. Nightwish have filled all the space available with seventy eight minutes of music and it will take time to digest it all. After my first listens over the last few days I like it a lot more than ‘Imaginaerum’ which never really grew on me and there is a lot to love here.

When the album is good it is very good and often sounds amazing (terrific production job by the way) but not all the songs hit the heights and consistency of their best work. It is a confident first step forward with their new line-up though and after another extensive world tour to get the vibe all bedded in I look forward to hearing what they come up with next.

MetalTalk’s Mark Taylor interviewed Marco and Floor for Record Collector magazine about the new album plus their thoughts on leaked downloads. You can watch the interview right here.