It’s Download weekend and 2015 is the first year that Britain’s premier Metal festival has gone “cashless” with the new payment-enabled ‘Dog Tags’ in place for the first time this year. 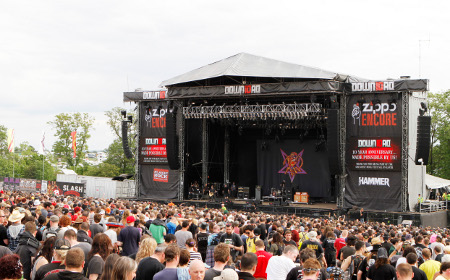 The official reason for their introduction is to speed up queuing and reduce crime but it is more likely that they were introduced to increase the average spend per head.

And they have had a disastrous debut with fans branding the system “useless” and a “complete joke” after it left them unable to buy food or drink today after the system appeared to crash.

Debbie Chapman wrote on the Download Facebook page: “Absolute joke. Cashless? More like clueless. Staff are ill equip to deal with this. Not enough support of the cashless info staff. Spent 2 hours in a que to pretty much be told come back in the morning. No bed. No food. No good download absolute amateurs.”

Sam Wilkinson said: “@DownloadFest Cashless at download!? Definitely cashless! System is useless, first time should run smoothly! Or not at all… Frustrating!”

Paul Bodman ‏said: “This cashless system at Download is a complete joke. Not working for so many people.”

Amy Powell said: “We cant eat or drink because the dog tags aren’t working. Come on download, this is my 9th download, and I’ve never known such a shambles..”

The official Download website explained that users would need to register their ticket online beforehand and then exchange the physical ticket for a Dog Tag wristband when entering the festival site.

A statement read: “We can’t trust Download Dog anymore so the festival is going absolutely cashless this year – the first major UK festival to do so. Which is pretty epic.

“Not only will it reduce queues for the bar and food stalls, it removes the faff of cash and makes security on site even tighter.”

There are balance check points across the site so people can check their funds and top up by card or cash.

They said free Wi-Fi would also allow attendees to go online and use the Download app.

A spokesman for Download Festival told The Daily Mail: “Download’s new ‘cashless’ RFID system has encountered some minor technical issues, affecting around 1% of attendees, which has resulted in extended queuing times at some information points.

“Many of those queuing will have seen the way we have responded by opening additional help desks, and the queue has now gone.

“However, we would like to extend our apologies to any festivalgoers inconvenienced in any way by these issues and assure everyone that they have been and will continue to be dealt with by a brilliant and dedicated team of engineers and festival staff.”

As well as Download attendees being subjected to surveillance of their onsite location and expenditure via the RFID wristbands, they will also be unwittingly trialling a new police facial recognition system, as reported in The Register.

The surveillance technologies are being introduced by Leicestershire Police who have been trialling NEC Corporation’s NeoFace facial recognition system since April 2014, though they only announced the trial in July of that year.

NEC, however, advertises its NeoFace suite as able to offer much more in biometrics surveillance. The particular system which will be used at Download has not been revealed.

NeoFace Watch is the mobile surveillance platform from the NeoFace suite, which functions by “integrating face matching technology with video surveillance input, while checking individuals against known photographic watch lists, and producing real-time alerts” according to a product brochure.

According to an interview with DC Kevin Walker, published in Police Oracle on Monday: “Strategically placed cameras will scan faces at the Download Festival site in Donington before comparing [them] with a database of custody images from across Europe.”

Big Brother really is watching you…