This is a book that analyses the song lyrics of Bruce Dickinson on his solo albums from ‘Tattooed Millionaire’ up to ‘Tyranny of Souls’, album by album and song by song.

In case you’re not aware, I played bass and took part in the writing process and development of the songs on the ‘Skunkworks’ album. I saw the songs on that project develop from rehearsals with rough lyrics to the finished album.

I think then that I’ve probably got a better than average insight myself into Bruce’s lyrics and roughly what they’re about.

I’ve seen a bit of internet discussion on chat forums and the like about some of his songs. Most of those sadly fall way short of the mark and often I thought, missed the point entirely. Some are just laughable. 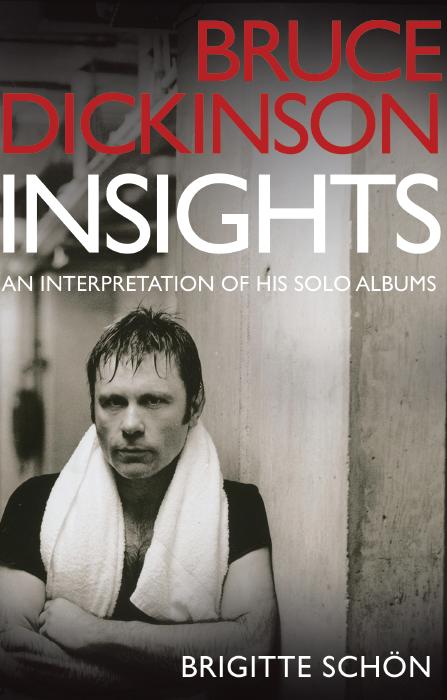 The author of this book is very different from the average chat forum poster. Brigette Schön is a professional academic with a degree in Romance Literature and Linguistics from the renowned Heidelberg University and is herself now a language teacher. In short, she knows what she’s talking about.

Brigette has taken apart each song, to look at the characters and depictions in Bruce’s lyrics and seen the metaphors they conjure of life, death, freedom and truth. She’s then looked into the references to the works of people such as Shakespeare, Blake and Crowley that have influenced the songs.

The book also takes a look into the technical side of his writing about aircraft, military history, space travel, politics and chemistry. Basically this book does exactly what it says and gives a very good insight to all of Dickinson’s solo albums and the developments between them.

‘Insights’ has pretty much everything I knew about the Skunkworks lyrics and pointed out a few things I had never noticed. That Bruce Dickinson chap is even more clever than I thought!

Highly recommended and well worth a read for any fan of Bruce or Iron Maiden.

Bruce Dickinson Insights is available at Amazon and usual outlets or direct from the publisher Troubadour at www.troubador.co.uk/