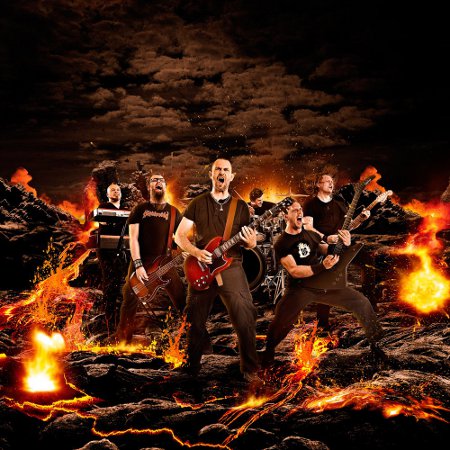 Based out of the remote country of Iceland, the mighty Sk√°lm√∂ld presents their own thrilling rendition of Viking Metal.

Recently signed to Napalm Records, their debut for the label is entitled Baldur, a concept album based on majestic Norse Mythology. Fans of acts such as Enslaved and Amon Amarth are sure to discover a new favourite when they encounter the grand Metal anthems of Sk√°lm√∂ld.

Here is a recent interview that Kenneth Morton of highwiredaze.com conducted with one of the members to find out more about the band’s history, the wondrous story of Baldur, as well as the music scene and BEER to be found within the wilds of Iceland. The adventure begins now…

Introduce yourself, tell me what you do in Sk√°lm√∂ld, and how long the band has been together.

My name is Bj√∂rgvin Sigur√∞sson, 33 years old, singer and guitarist of Sk√°lm√∂ld. Sk√°lm√∂ld was formed in August in 2009, so it’s been two years for us now, two good years.

Where is the band based out of and what is your local Metal scene like there?

We are based in Ryekjav√≠k, Iceland. Two of us live though in neighbouring towns, but basically it’s Reykjav√≠k. The Metal scene here is really growing, and has been growing steadily in the last few years. We have a lot of talented bands here now (S√≥lstafir, Atrum, Gone Postal, Angist to name a few); it’s just a shame that so few have heard of these bands.

And it’s not just that we have a growing number of good bands, the fanbase is also getting bigger and the attendance to Metal concerts is rising. My feeling is that the Metal scene has never been stronger in Iceland.

I would also have to mention our Metal festival, Eistnaflug. Held every year in July. This festival is always getting bigger and has started to draw attention from some of the biggest Metal zines. Plus we have been so fortunate to have some big names headlining the festival in recent years like Napalm Death and Tritykon. You have to come and experience this festival. It’s the best festival out there.

Is there any story or concept behind Baldur?

Baldur is a concept album, telling the tale of the Icelandic Viking Baldur. All our lyrics are written by Sn√¶bj√∂rn, our bass player, and the story, the concept, is his idea. It’s fictional and has no relation to any historical figure.

Baldur is a wealthy and settled man whose home is attacked by an unearthly creature. His land is destroyed and his family brutally murdered. We then follow Baldur, and two of his men Gunnar Jarl and Gr√≠mur, on an epic quest for revenge, through the cold and harsh Icelandic landscape. They get the chance to fight one last battle against their enemy and come out victorious. But they pay for victory with their own lives. Baldur then rejoins his family at Valhalla. It’s a basic tale of revenge actually. With a happy ending.

Please select two particular songs from Baldur and what inspired the lyrical content.

Since Sn√¶bj√∂rn wrote the lyrics and the story he is probably more suitable to answer this one. We’re also dealing with a concept album so it’s hard to pick two songs out. But what inspired Sn√¶bj√∂rn in general are the Icelandic sagas and Norse mythology. There are a lot of references in the lyrics to both the sagas and the mythology.

Sn√¶bj√∂rn has in a way created his own world where the events take place. His father used to read a lot to him when he was growing up, old Icelandic stories and stories of the old Norse gods. And Sn√¶bj√∂rn has kinda taken this and mixed it with LOTR and AD&D to create his own Icelandic/Norse fantasy world. And we have also talked about it amongst ourselves how much we like this little world of his. And that future albums should also take place in this same world.

With Baldur being basically a concept album, would you ever want to go and and perform the album live all the way through?

Yeah, and we’ve done so. We played three concerts to celebrate the release of the album here in Iceland, two in Reykjav√≠k and one up north, where we played the album in chronological order. We had a storyteller with us who read the story between songs and we had photos and lyrics shown on big screen in the background. It was a great experience, both for us a band and for our fans as well. It really did turn out well. It would be great to manage to do some shows in that manner abroad someday.

How did you wind up being signed to Napalm Records?

Baldur was first released by the Faroese label Tutl. Tutl and Napalm Records have had some connection in the past, T√Ωr did for example start out on Tutl before signing to Napalm. So it was through the great people at Tutl we got in touch with Napalm.

Napalm did show great interest in signing us and we got to an agreement with in April 2011, an agreement which I think both parties can be satisfied and will benefit from. And so far our co-operation with Napalm has been great.

What are you looking forward to the most about Heidenfest 2011 and tell me a little about the festival?

Heidenfest is a travelling festival. It’s the third time this festival is being held and this year Finntroll is headlining, along with Wintersun on selected dates. Heidenfest is a folk Metal festival, all the bands performing are folk Metal bands, or folk oriented. Heidenfest will this year travel to eleven European countries in 24 days so it will be a busy 24 days.

There have been some great acts performing at Heidenfest in recent years, like Primordial and Enslaved. To me it’s an honor to get the chance to be a part of the festival.

Heidenfest will be our first tour as a band, and we’re really looking forward to it. We will get chance to play for thousands of people, many of whom have never heard of Sk√°lm√∂ld. We’re just gonna enjoy it to the fullest, give all we got every single night and try to make some friends and new fans along the way.

What could one expect from a live Sk√°lm√∂ld show?

You can expect tons energy and passion. We’re not theatrical in any way, we rely more on integrity. When we go onstage we are having the time of our lives and the crowd can really see it and feel it.

I believe we are an honest band. We are not trying to be something we’re not, we just go out there and give all we got, every single show. And you can also expect some smiles here and there. To be in a band and perform your songs for others is supposed to be fun. And you can see it on our faces that we’re enjoying it. When it stops being fun, it’s time to find sometthing else to do.

Who did the cover art for Baldur and how much input did you have on it?

The cover and the booklet was done by a friend of ours, Hallmar Freyr √zorvaldsson. He’s is truly a genius and well respected in his field here in Iceland. We got a photographer, models and make-up artists, went out and shot some pictures. Then we just handed it to Hallmar and told him to do whatever he liked with it. He has also worked on our promo photos. I hope he will be up for it for our next album as well, ‘cuz it’s a pleasure to work with him.

Have you ever played or been to Wacken, and if so, what was the experience like?

We did play Wacken this year, and it was the first time anyone of us had been to that festival. We really enjoyed it. We’re very happy with our own performance. A lot of people showed up to our gig and seemed to love every second of it. And so did we. And it most certainly did not ruin the day to have some major acts headlining, like Judas Priest and Motorhead. We most certainly hope we will get the chance to play Wacken again in the future. I mean it’s like the Metal Olympics.

What is your favorite beer from Iceland and why?

I have to give my vote to Kaldi Brewery. I really like every product of theirs, but I have to say that the dark lager they brew is their best. And why? It just tastes so good. But it could also have to do with the fact that it’s a small brewery, family company, and their main goal is quality over quantity. I like that attitude.

And chance we’ll see Sk√°lm√∂ld invade the States one day and do some shows?

I certainly hope we’ll make it to the States one day. We have received a lot of positive comments from people all over the States and it would be great to be able to perform for those people, and hopefully others. Now our album has been released in the States, so why not? Hopefully sooner than later.

Any other words of wisdom?

A word from the wise? No, I don’t think so. Just wanna thank all of you for the support so far. We really appreciate it. Let’s hope we will have the chance to come to the States someday soon. That would be great. Stay Metal!