After a triumphant tour with Journey that saw Foreigner play to tens of thousands of new fans and earn great critical acclaim, Foreigner announces the release of a brand new album, ‘Acoustique’. 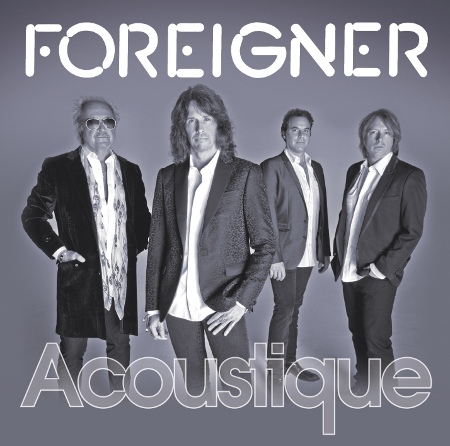 Foreigner first saw success throughout the world with their ground breaking debut album that featured chart hits such as ‘Feels Like The First Time’ and ‘Cold As Ice’, and scored multi platinum sales and a world tour. The band went on to sell over 70 million albums, driven by some of the most important songs in the Classic Rock era.

‘I Want To Know What Love Is’ was a worldwide number one hit and ‘Waiting For A Girl Like You’ is in the Top 50 Billboard magazine’s All Time Greatest Pop Songs. The rocking side of Foreigner was always key to their success, and songs like ‘Hot Blooded’, ‘Dirty White Boy’, ‘Urgent’ and ‘Juke Box Hero’ took the band to new levels.

‘Acoustique’ will be released on Edel’s international rock label, earMUSIC distributed in the UK and Republic of Ireland by Absolute via Universal on September 26th. It takes a fresh look at some of Foreigner’s hits and offers some unique surprises. The stripped down version of these great songs shows Foreigner in an entirely new light, and the release will be supported by unplugged tour dates and multiple television appearances.

Foreigner inject new life into all their hits, pay tribute to Elvis Presley with a unique recording of ‘That’s All Right’ and throw in a couple of previously unreleased tracks. ‘The Flame Still Burns’ was co-written by Mick Jones for 1998 cult rock movie, ‘Still Crazy’, where it was performed by Jimmy Nail. Mick won the prestigious Ivor Novello Award for that song. The album features a brand new song, ‘Save Me’, which was co-written with Mick Jones’ step-daughter and well-known DJ and musician, Samantha Ronson.

‘Acoustique’ will also be available in a special limited edition box set that includes a DVD and a CD of brand new digital recordings of Foreigner’s greatest hits by the current line-up. The DVD features a full-length live concert in high definition that was recorded in Chicago earlier this year and some bonus features that include one of Foreigner’s first acoustic performances at Schloss Kronberg in Frankfurt that inspired the making of the Acoustique CD.