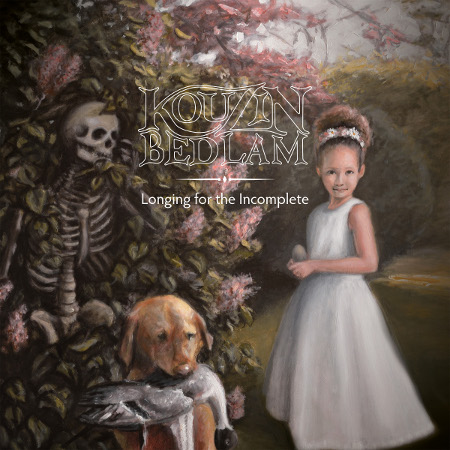 Back to my my Nordic roots, or at least in the right general area, and to Finland for this one.

It is worth starting with an excerpt from the bio, something which I generally ignore as they tend to be greater works of fiction than my tax returns, but in this case it is quite intriguing.

“Kouzin Bedlam is a baroque painting painted in the colours of Heavy Metal. It is highly technical and deeply embedded in mythology; it is sometimes over the top, yet always lyrical and sublime. Its extraordinary qualities lie not just in terms of song writing and technical ability. In fact, Kouzin Bedlam is not just a band; it is a philosophy, it is a family; it is psychology and spirituality expressed in a musical extravaganza with surprising depths.” See, told you.

It gets even more intriguing when you see influences ranging from Dire Straits to Dream Theater, but varied influences tend to lead to more interesting material so let’s see how the musical side stacks up against the philosophical side.

‘Ordo ab chao’ is first and is a brief, minute long introduction, but it is quite a powerful one. Think an angry sermon on the mount, with militarised drums rising to a crescendo behind it.

‘The Accusation Of Job’ is the first full length one and starts off with some gritty, menacing riffs before vocals come into the mix. The first thing that hits is the distinctive melody and interplay between guitar and vocals, harmonising at points. Drums gallop along behind it adding their own brand of menace, guitar all the while crunching in the background before letting loose on the second half of the track, after the vaguely threatening mid section, half spoken, half sung. A dynamic start.

‘Pavane For A Dead Princess’ has a different feel, keys starring throughout the beginnings especially, beautifully filling the gaps. Again, a superb vocal melody brings out all the colours and images, and all the while there are small but very perceptible changes in that melody and the rhythm behind it. There is more mid-section chicanery giving way to six string widdliness galore before it closes out with some Billy Idol-esque wooaaaas. In case you weren’t sure, Pavane is a 16th century court dance, so now you know. 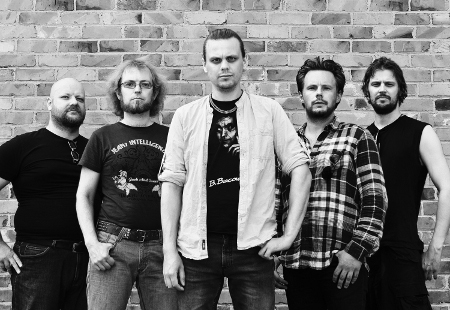 ‘Never Come Home Again’ is very different to all that has come before, slow, restrained but perversely full of as much menace as the grittier faster ones. Well he is ‘the light that made you blind’, so menace is there musically and lyrically as it builds up, with the keys again adding depth in perfect proportions. There are more soloing guitars, this time more restrained and melancholy, even having time to throw in some Spanish derived patterns. It is getting to be a familiar pattern but the vocal melody, and on this one the chorus especially, stand out and burrow their way deep in to you, as anything worth its salt does.

‘Shadows In The Dark’ goes back to the heavier end but again as melodic as you like, rhythm twins getting together and dragging this one along by its short and curlies. There is a surprising vocal that appears, faster, gruffer, heavier but again the melody isn’t ignored as it goes back down to what has come before going to the more berserk mode again, bass line sumptuously coming through the gaps. This one too has more twists and turns than… well… a really twisty turny thing. It will be one you will listen to a few times one after the other, a great piece of tuneage.

‘Psychonaut’ has yet another approach, immediate vocals, speedy “hush little baby, don’t you cry” lines (yes really, you will just have to listen), before it drops into dramatic, guitar led songery. The vocals on the verses are different again as well, choppier more to the point, leaving the drawn out content to the complex choruses. Another winner.

‘Oxygen’ gives musical interpretation at the beginning to breathing, a sound of the imagery, and guess what? Again this has a very different feel to it and if I had to compare it to anything I may go for a touch of Rage for order era Queensryche, but in truth it isn’t like anything else, and that’s about as good as it gets with music.

‘Return to the caves’ is a stirring yet dark piece of music, speeding drums and guitar with cool drum fills thrown in and keys in overdrive keeping pace. Malmsteen-ish guitar struts its stuff very early on, speeding vocals again, but pure in their silk laden pattern. There are again so many levels to this, not to mention sections and it is all held together by an anthemic mood contrasting against the darkness that is always prevalent if not to the fore.

‘Crash Test’ is filled with very catchy riffs, not overly heavy, but just downright contagious – in fact the whole song is. If I said it even at times verges into the pop area, that isn’t a detrimental thing, it’s just that it is that instantly appealing and there is nothing wrong with that at all. Many have tried and failed, these guys succeeded at round about the first try.

Don’t get me wrong, it rocks along with the best of them but ultra catchy melodies have become synonymous with pop over the years and as we all know the word pop is an anathema to the rock world, or at least large narrow minded parts of it. But if you like your rock catchy and memorable then look no further.

The title track, ‘Looking For The Incomplete’ is next and also the last offering. A very funky groove brings it into life, rocky but swinging and that runs concurrent with more symphonious serenading, before six string artistry takes over, almost as if they want to leave us with precis of their talents, and it works well. The solo on this last track is stellar, covering about four styles and untold influences, superbly delivered, still leaving time for some more vocals before it all closes out as swiftly as it began.

So there you have it and I am more than a little impressed. You may have noticed by now that the standout ingredient with these guys is melody… house buying is all about location, location, location and music is melody, melody, melody, without that it ceases to exist as an entity capable of finding its way into your consciousness, and trust me Kouzin Bedlam will be well and truly ensconsed in your cranial physicality quicker than you can say “Coldplay are shit”.

There are so many twists and turns, musically, that even the most critical of listeners will find themselves drawn in to the experience. Perhaps most impressively, the variety of fayre on offer is wide ranging, albeit within the Rock genre, but it all gels together giving an almost unique sound when it is taken as a whole.

Another reason the Nordic fellas, and girls too of course, are taking things to a whole new level musically and the rest of the world needs to pay attention fast.