Now in it’s sixth year and for the second year running the Sunflower Jam is held at the grandoise Royal Albert Hall to raise money in a commitment to improve the treatment and care of patients with pancreatic cancer. The fund rasing charity was set up by Jacky Paice, the wife of Deep Purple’s drummer Ian Paice.

The event for this year took on a whole closer meaning to the organisers with the sad loss of Jon Lord, who was married to Jacky’s twin sister Vicky, and whilst tonight was a glorious jam with some of the biggest names in rock, it was in a way a little tribute to the Lord of the Hammond himself.

Those with big wallets and kind hearts to match had a champagne reception followed by dinner and an auction and were seated around huge round tables in the stalls area with the doors opening later on for music loving fans to enjoy the concert.

This year the show got under starters orders on time and actor Jeremy Irons introduced the evening starting off with a little titillation with the dance group Miss Kitty shaking their stuff to ‘Whole Lotta Love’ before the real live action which first featured some rootsy rock ‘n roll from Temperance Movement , a young band with soul and guts and the right grooves. 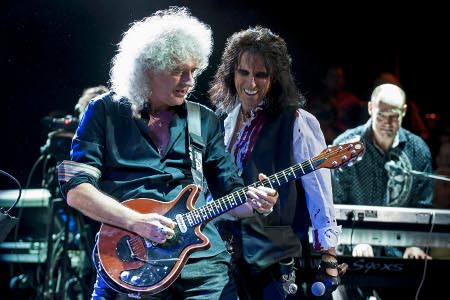 Margo Buchanan sang a fine lighter version of the Who’s ‘Substitute’ accompanied by guitarist Murray Gould, who has the perfect name if he wishes to sell kitchen gloves, and who later joined the house band. The house band for the evening featured some of the country’s finest musicians including former Whitesnake charmer Micky Moody, drummer Jerry Brown, Nick Fyffe on the bass and the talented Brian Auger who had the solemn job of using Lord’s Hammond.

Sandi Thom looking marvellous and no longer wearing flowers in her hair gave a stupendous acoustic ‘November Rain’, the G’N R classic. Former Scorpions member Uli Jon Roth apologised in advance for a deafening but spellbinding instrumental take on ‘Sails Of Charon’ followed by Alfie Boe’s storming version of Led Zep’s ‘Rock ‘N Roll’ before the more lighter ‘I Want To Know What Love Is’. 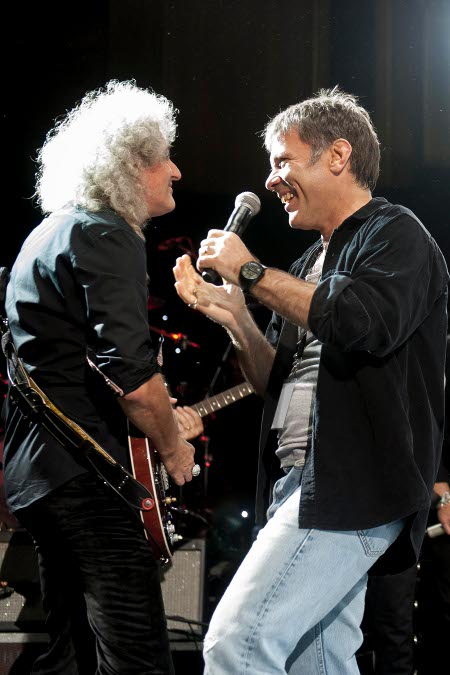 Brian May was in the house and surprisingly not a single note of Queen was heard. Dueting on acoustic with Kerry Ellis, complete with lovely long blonde mane of hair, with ‘Born Free’ got a roar of approval.

The evening took on a sombre but meaningful twist when Jesus Christ Superstar’s Steve Balsamo read out an open letter to Jon Lord thanking him for time, patience and belief as everyone in the hall listened intently. Then he was joined by violinist Anna Phoebe for a moving ‘Pictured Within’, one of Jon Lord’s own pieces of work, played along to a collage of photos of Jon on the big screen… A very mournful moment as we reflected on the life of a true talented and well liked man.

I felt it would be impossible to follow that and the next act, a group of cancer sufferers known as the Big C all joined forces to sing ‘Something Inside So Strong’ and Bon Jovi’s ‘It’s My Life’ with the lines of “It’s my life, it’s now or never, I ain’t gonna live forever… I’m just going to live whilst I’m alive… It’s My Life”, ensured a standing ovation and the loudest cheer from everyone in the Albert.

Level 42’s sonic bassist Mark King took us back to the eighties with ‘Something About You’ and ‘Lessons In Love’ and was then joined by a returning Uli Jon Roth for a Creamy ‘Sunshine Of Your Love’. Roth stayed on stage to see Bruce Dickinson, bottle of Spitfire ale in hand, give a bash at Thin Lizzy’s ‘Emerald’ with some duelling antics between Moody and Roth.

Dickinson then gave us the Who’s ‘Behind Blue Eyes’ before the bizarre sight of him being joined by Brian May, Ian Paice, Led Zep’s John Paul Jones along with Brian Auger. They became the new house band with a jamming ‘Black Night’ with calamitous miscues from all at the end with Ian Paice the master keeping it all together. He couldn’t resist a little ‘B’doom tsh’ at the end.

May and Kerry Ellis were back out front with Rainbow’s ‘Since You Been Gone’ a track that May last played here on the ‘Another World’ tour in tribute to Cozy Powell. The king of the ring, Alice Cooper, entered with theatrical demeanour and owned the stage with a gutsy cover of Chuck Berry’s ‘Nadine’ and threw his cane into the crowd with rousing versions of ‘Elected’ and ‘School’s Out’.

The night ended with an all star cast jamboree of ‘Smoke On The Water’. This was an historical gig, captured forever on film for a future DVD. Next year will be a full tribute to the works of Jon Lord. The ticket is worth every penny and is for a very good cause. 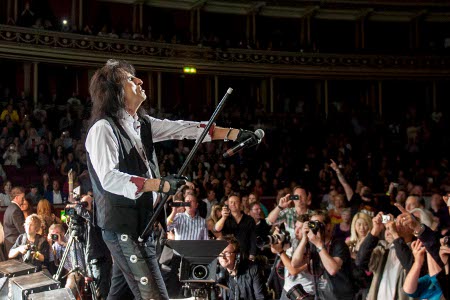 Alfie Boe:
‘Rock ‘N Roll
‘I Want To Know What Love Is’

Brian May & Kerry Ellis:
‘Born Free’
‘I Loved A Butterfly’

Big C:
‘Something Inside So Srong’
‘It’s My Life’

Mark King:
‘Something About You’
‘Lessons In Love’

Brain May & Kerry Ellis:
‘Since You’ve Been Gone’

Super Jam:
‘Smoke On The Water’

Review of Jon Lord’s ‘Concerto For Group And Orchestra’. 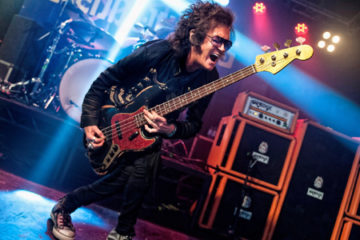