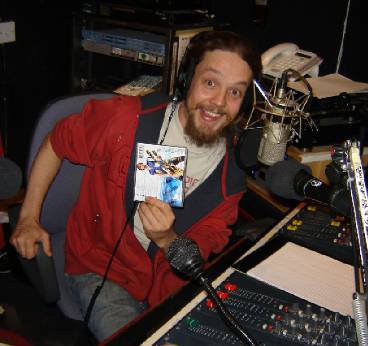 My career as a DJ started while quietly having a pint with the landlord, John McKibbin and some friends at the old Kings Head in Fulham (now sadly demised as a rock venue). Total Rock was an internet radio station that broadcast from a studio, above the pub.

One of the DJs, the legendary Krusher Joule (he’s one of the top rock DJs in the country who’s compered Donington and Ozzfest as well as being the artist behind the original Kerrang! logo and the evil runes on Ozzy’s ‘Diary Of A Madman’ album sleeve), had just finished his show and popped downstairs for refreshment and to share his thoughts on the day.

“Arse Chickens!” he shouted. “They’re a bunch of arse chickens!”

It seems Total Rock had offended him (or perhaps his dog). They were both easily offended.

“Nipple donkeys!” he exclaimed “I’ll show them where they can shove their show. I tell you, I’m not doing it tomorrow. They can stick it up their…..”

I never found out how they’d offended him as his words were so mingled with expletives that there was precious little of the actual tale buried among them.

“I’ll do it then!” I said. It sounded like fun. Well, not the arse chickens bit but being a radio DJ in general.

Memories of listening to the late great Tommy Vance’s Friday Rock Show on the BBC as a teenager came flooding back. Total Rock’s producer was (and in fact still is at Bloodstock Radio) the equally legendary Tony Wilson who had produced Tommy Vance’s show back in the day.

The other main man at Total Rock/Bloodstock Radio is Malcolm Dome, the Professor of Heavy Metal and one of the original Kerrang! team that helped popularise Heavy Metal to a generation of kids in the 1980s including myself.

If it wasn’t for them I would probably be a street sweeper right now. Without boasting too much, I reckon I’d have been quite good at it.

So anyway there I was a decade ago, pint in hand, volunteering to Krusher to do a show in his place for Malcolm and Tony. Maybe I’m a bit out of my depth in the legend status here?

“You f*cking do it then!” Krusher ranted. “Those spunk spiders don’t deserve the hair off my…..”

So that was it settled then. I was a radio DJ. Next question was, “Errr… what do I do then?”

Krusher told me that he’d come in the next day and do the first half hour to show me the ropes and then he’d leave me to it for the rest of the three hour slot. That sounded reasonable.

As it happened, Krusher’s idea of doing the first half hour was to stick Led Zeppelin’s 25 minute live version of ‘Dazed And Confused’ on while roughly gesturing at the mixing desk and mumbling to himself (or perhaps in hindsight it was to me)…

“That does the music, those are the adverts, that’s your mike… I’m off.” And true to his word, he was gone.

I’ve been there ever since.

I was right about my first suspicions, being a radio DJ is in fact very good fun.

For starters you get to play all your favourite songs at people. The listeners can message you back via the chatroom, saying they liked the songs (or not) and they request more songs themselves.

Then I judge if I deem their requests worthy of airplay. Sometimes they suggest cool tunes I’d never have thought of. Recent examples include Trapeze’s ‘Black Cloud’ requested by T-Bone in Baltimore, Judas Priest’s ‘The Ripper’ suggested by Sasquatch Bob and Gary Moore’s ‘Back On The Streets’ requested by my good friend Mr Jef Streatfield.

Getting a request like that can make my day.

Other times they request things that I don’t really want to sit in a small room listening to. One listener requested Rammstein once. So I played the Scorpions as a compromise. That’s fair isn’t it?

As a bonus I get to interview loads of Heavy Metal heroes on air (sometimes face to face and other times on the phone). I get to ask them all the questions I ever wanted the answers to. Here’s my favourite ten questions I’ve got to ask people:

1 Bob Kulick, which Kiss tracks exactly did you play on and if you had joined Kiss in the 70s what would your make up design have been?

2 Scott Rockenfield, is that your real name and did Queensryche really play Iron Maiden covers in clubs in the early days?

3 Scott Ian, are Armoured Saint like a substitute’s bench for Anthrax?

4 Geezer Butler, how does it feel to have influenced every Heavy Metal band ever?

5 Steve Lukather, how did you end up playing on the 1978 Peter Criss solo album?

6 Geoff Tate, did you ever regret putting the umlaut two dots above the Y in Queensryche, being as we can’t write it on a standard keyboard?

That one seemed like a reasonable question to me for any guest and frequently cropped up out of the blue and mid-conversation. Often it went down well.

One interview went a little sour with a band (who I won’t name) when I opened their promotional opportunity on air by asking if they thought ‘Sonic Boom’ was a leap forward or backward for Kiss?

They looked a bit blank for a horrible pause. A second of silence is the worst thing on radio.

Then they foolishly admitted they didn’t listen to Kiss. Odd folk. We never really hit it off after that.

8 George Lynch, weren’t you nearly in the Ozzy Osbourne band?

10 Kee Marcello, you played Hammersmith Odeon and Milton Keynes Bowl with Europe. Tonight you’re headlining your first solo show in London but the UK hasn’t always been so welcoming for you, has it? Tell us how your first ever visit here ended?

The answers to those questions are at the bottom of this feature.

Once I interviewed Bruce Dickinson. Well, first he interviewed me on his BBC radio show, then we switched roles and popped round the corner to Total Rock where I interviewed him on my show. Later we went to a bar and interviewed each other off air at length.

Another time the late great Tommy Vance himself came in to do a show straight after me. It was like supporting your favourite band ever.

I learned a thing or two watching his show. He started the show with Dio’s ‘Rainbow In The Dark’, then introduced himself with “Hello kids, Grandad’s back!”

What I learned from that is that playing Dio on the radio is always a good thing.

I’ve made some good friends through Total Rock both in the other DJs there and among the listeners too. The listeners really make or break the show with their comments and requests. I love my regular listeners. You’re all top!

That’s one thing that I think puts Bloodstock Radio head and shoulders above most of their competitors. It’s that live interaction between the DJ and the listeners. The fact that the show can be up to the minute and personalised for listeners is its great strength.

Recently my regular showtime of 3.00-6.00pm on Thursdays has been axed in some of the reforms of the station involved in the changeover to Bloodstock Radio. I was offered another slightly altered slot which unfortunately I couldn’t commit to regularly.

It’s a shame to lose the old slot but not to worry, I’m going to still do the odd show here and there when I can. Check out my Facebook and the Bloodstock Radio website for updates.

In the meantime my last regular show will be next Thursday 7th February at 4.00-6.00pm UK time. Tune in, log into the chatroom and say hello.

We’ve had ten years of fun there, this week will probably be the best ever!

Oh, before I forget, the answers to those questions were-

1 Just the new ‘Killers’ tracks and the studio side of ‘Alive 2’ excepting Ace’s ‘Rocket Ride’ of course. He denied playing any of the ‘Creatures Of The Night’ album or on the final version of ‘Naked City’, which he co-wrote with Gene. The second answer was Ming The Merciless.

2 Yes and yes, with the classic line up. It must have been awesome!

3 That was quite an emphatic “no”. In retrospect he might have been slightly offended by that one and some other Kiss related questions I asked him. Oh well, you can’t win them all I’m told.

4 He said he didn’t know as he hadn’t had time to listen to them all yet.

5 It turned out it was one of the first sessions he’d ever recorded. It was before he made a name for himself in Toto or as a regular session player (did you know that he played on Michael Jackson’s ‘Thriller’, Lionel Ritchie’s ‘Can’t Slow Down’ and Alice Cooper’s ‘Trash’ to name but three?).

He said for Peter’s album he was a youngster and happened to know Vini Poncia who was producing the album and got the call. I’d always thought he was one of the big names on the album as a special guest but no, it turned out he got famous later.

He also told me some hilarious stories off air about the crazy stuff he’d got up to with various artists on and off stage. I wouldn’t want to offend you, dear reader by repeating them here.

7 Gene Simmons. It’s a surprising answer. Most people go for Ace or Paul, but he went into a long critique of the album and its genius to back up his argument. He almost had me convinced for a minute there!

8 Yes, he was that close… but it all went suddenly pear shaped. He told me all about it at great length. Actually he had such a rant about the whole thing and various people involved that our producer Tony told me to take him off air in case law suits followed. I’ll tell you all about that one another time. It was priceless!

9 Dave also known as AKA, has been one of the most regular of regular listeners and his input has frequently made my day. On his birthday once, I got him to call the show and put him live on air for a surprise to ask about his misspent youth and yes he was a part of Led Zeppelin’s legendary road crew.

Another time there was Steve, a barman at the Kings Head who always used to go on and on to me about the ‘St Anger’ album by Metallica, as if I cared. Really, he was a bit obsessed.

So I dragged him onto the show and let him get it off his chest to the listeners. He seemed a bit nervous but I think it was probably very therapeutic all round. He’s never mentioned it to me since.

10 This was a slightly loaded question to which I already knew the answer. Kee was good though and laughingly admitted that he had been deported from the UK for vagrancy as a teenager. He went on to score more bonus points by playing a cover of ‘Parasite’ by Kiss in his set that night.

You see? Everyone loves Kiss! 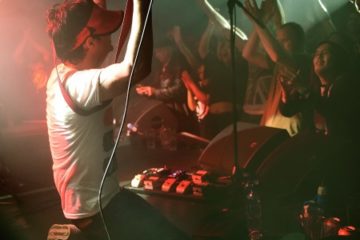