In my youth I would do anything rather than having a proper job. I tried all manner of low life occupations from toilet cleaning to bass playing. Somewhere between the two on the social scale came being a film extra.

An extra is like being an actor but you don’t need to learn lines or have any noticeable talent. Extras are the guys milling around in the background on your favourite films and TV shows.

I did a few jobs like that. For one particularly humiliating supermarket shoot I even patted my own bum and said “That’s Asda price!”. But it was better than stacking the shelves at Asda’s shops which was my next option.

Probably my favourite extras job was on the promo video for the Smashing Pumpkins song ‘Ava Adore’ and this was not because I was particularly a fan of the band.

We had to do an audition for the job where we were asked to pretend we were being poisoned. I did some Gene Simmons tongue faces, fell to the ground and hoped that’d do as I really couldn’t be dealing with putting much more effort into it. I am not an actor.

The directors obviously weren’t very picky and that did do. A bunch of us London rock scene folk passed the audition with similar techniques including Sack Trick and Rachel Stamp members David Ryder Prangley, Chris Nubile and the ubiquitous Mr Robin Guy.

The idea for the video was that several different sets would be made in a U shape facing inwards. A different scene would be being played out in each set and the band would walk in and out of them of them miming to the song as the camera followed them around on a single track. The song had to be filmed in one take from one moving camera.

It’s not how promo videos are usually made where different scenes are usually shot in separate takes over a few days. This was a unique idea and took a lot of money and hard work from the supporting crew to make it happen.

One scene looked like a bombed out house with a crying woman. One was a filthy asylum ward. There was a disco scene and a pornographic movie shoot, Chris Nubile played the part of the film director there. One couple lay on some steps in an indoor rainstorm.

This was a massive set up. I heard later that the video ended up costing over $1million to make. My wages made up only a tiny fraction of that total.

To add to the confusion, they played the song digitally sped up in some sections and slowed down in others but keeping pitch throughout for the ease of the band miming.

So now dancers had to keep beat to a changing tempo. This meant when the video was played along to the song at normal speed the footage appeared to speed up and slow down.

That was a very clever idea. In fact, I thought it sounded better like that. I was later quite disappointed when they released the standard tempo version.

We were dressed up from a large hired costume department. A male model who’d been telling me how his “cheekbones were his living” was given a gasmask. I liked that. He didn’t.

They fitted me up in a vintage red hunting suit with tails and a top hat. I looked quite smart for a change. Robin Guy had turned up in fancy dress already. He usually does.

They paired me up with a girl dressed very similarly to me in a red Victorian dress matching my suit, a top hat and a veil. She was quite pretty and wore lots of make up.

We were told our places on set and then the directors came around to give us a briefing on how it would all run and set us individual roles. One of the directors (Nic Goffey or Dominic Hawley, I’m not sure which) asked me what my “motive” was.

Actors have “motives”, Extras do not. My motive was simply to stay out of gainful employment for the day.

He looked impatient, pointed at my pretty colleague and said “Just lick her boots would you?”

For a second I thought he’d said “boobs”, but no he wanted me on all fours licking her high-heeled boots while she pouted and played up to me. She was a good actress as it turned out.

In breaks I hung out with her. This was partly because she was pretty and partly to make sure she didn’t step in any dog mess outside, before we began the next round of boot licking.

We did 28 takes of that video. Each time something wasn’t quite right for the directors. It went on later and later. We got paid for overtime and then a bit more for taxis home.

For some it was tougher than others. Robin Guy had to keep jumping up and down as high as he could for the duration of the song twenty eight times over. The couple under the rainstorm had to get soaked with freezing water and then dried off twenty eight times.

I licked her left boot and she licked her lips at me. We did that twenty eight times. That was a pretty clean boot at the end but I thought I could have done a better job on take number 29. I’m a perfectionist you see.

The album ‘Adore’ went platinum. The finished clip won the “Most Stylish Video” at the 1998 VH1 Fashion Awards. I have yet to receive my personal award. I guess it’s probably stuck in the post somewhere… 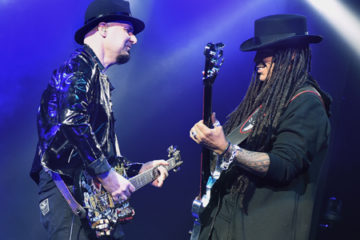