There is a saying that the good guys finish last, but I am here to tell you that Accept guitarist Wolf Hoffmann has thoroughly chewed up and spat that saying out. I spoke to him a few days ago and it is fantastic to report that he is on top of his game and as nice as they come.

Yesterday we spoke with Wolf about his return to music, what we should expect from the new album and how the band have evolved with three guitars and personnel changes. Read Part One of the Interview here.

A few years ago, Alice Cooper ended his show with old and current band members onstage at the same time. It was amazing to watch. Would that ever work with Accept?

Wolf Hoffmann: “It has never come up yet, so until it does, I don’t know what to think of it. But you never say never. It is weird, you know. When someone leaves the band, you tend to never see them again. There is never any run-ins during festivals because, I don’t know…it hardly ever happens.

“There was one time, though, we met Udo at a festival. We were performing and it was maybe in 2011. It was bizarre, because I went over to hug Udo, to say hey, let’s let bygones be bygones, nice to see you, that kinda thing.

“He didn’t want to have anything to do with me. He brushed me off, it was kinda weird. But…whatever, just let it go. But generally, you never really run into each other.”

“It’s really hard to say until we play them live. That is when you discover the songs in a new way. But, I would say the opening two tracks are good contenders to maybe open the shows with. ‘Overnight Sensation’ is definitely a crowd-friendly song that everybody can get into quite nicely, especially during festivals.

“And slow songs? Yeah, they have their place in the set list as well. Sometimes though, you just have to wait and see what it sounds like, because an album is an album and a live show is a live show.

“Sometimes they sound better than on the albums, but sometimes they don’t. Sometimes they take a life of their own and they just don’t come across as well as you thought they would. So we’ll have to wait and see.”

Do you sometimes mix your setlist when you play live?

“We do. I’m not a huge fan of it, but sometimes we do that just to see what happens. But then, sooner or later, you find one setlist that is perfect and that is kinda the one you stay with.

“You don’t want to go away from that once you have found something that works really well. Because, if you think about the audience, they have not seen the previous show and I think to myself, the audience was not there last night, so if it worked really well last night, why shouldn’t it work tonight?

“Unless you play to the same crowd at a few shows in a row, then I see a reason to mix it up. But, other than that, I think, no.”

You have mentioned that the title track, ‘Too Mean to Die’ alludes to COVID-19 and of course it is talked about everywhere, all day, every day. What other topics have influenced you on this album?

“‘Overnight Sensation is talking about the ‘YouTube kid’ generation. You know, the influencers, the people who have a million followers and get rich overnight. ‘Symphony of Pain’ describes Beethoven’s personal struggle with deafness.

“‘The Best is Yet to Come’ is a mid-tempo ballad that tells us that you never know, life might be sh*t today, but the best might still be ahead of us, which is kind of a positive, optimistic message. ‘Samson and Delilah’ is an instrumental track based on classical themes.”

The first Accept album I bought was ‘Russian Roulette’ when it was released in 1896 and it is still one of my all-time favourite, definitive Metal albums. What is your favourite Accept album, and why?

“Hmm, maybe ‘Blood of the Nations’, because it’s got so many good songs on it. We could play just about any song on that album, and maybe ‘Restless and Wild’ is also in that category, judging by how many songs of that album we still play live.

“Sooner or later we play every song we have ever written, either during rehearsals or in front of an audience and then you discover how good, or not so good, songs are when you start playing them live.

“Judging by that, I would say ‘Restless and Wild’ is a really strong album and of course, ‘Blood of the Nations’.

“But it is pretty hard to just pick one. And I cannot name a favourite song, there are so many.”

Some bands change members with spectacular arguments and fights. It doesn’t seem to happen with Accept. Is there a certain maturity within the band that it’s a real world out there, and these things just happen, or is it all kept behind closed doors?

“No, people always try to stoke the fire, but we don’t let it happen. It could all turn very ugly right away if I say the wrong thing and I won’t, because that’s not worth it.”

Are your songs written by individuals, or is it a collective effort?

“Well, I write a lot of it, most of it, probably, but we have a new bass player called Martin Motnik and he contributed a lot of stuff this time, which was a big, welcome surprise.

“And then Philip Shouse contributed a bunch of solos and of course Mark writes a lot of the lyrics. So it was a bit of a group effort.

“Not everybody in the band writes and they don’t have to. Like Phil, the new guitar player, he is an amazing player, he knows a gazillion songs, he has got a huge catalogue of songs that he knows inside and out and he learns stuff super-fast, but he is not much of a writer.

“At least, he hasn’t brought anything to the table yet. And that’s fine.

“Some guys are just performers and players, and others are writers. And I’m sure there are some amazing songwriters that can’t play very well, and amazing players that can’t write very well, so it doesn’t always go together.”

What do you like best about the studio, and about playing live?

“The studios can be fun, they can be tedious as hell too, you know, when you have your dry phases and nothing really seems to work out right. If it doesn’t just click, then it is a lot of donkey work sometimes, where you just sit there and throw everything away the next day.

“But at the same time it is a lot of fun when you see those songs finally taking shape and they get better and better, and at the end you have got a mixed album and you are really proud of it, and you think, that was worth it all.

“That is a really great, satisfying experience and when it finally gets in the hands of the fans, like it will soon, then the weeks and months were time well spent.

“But really, if I had a choice between the two, I would probably just be playing live and be totally happy, but song writing is part of it if you wanna give the fans new material and if you want to have a new cycle and new energy, it brings something.

“If you just keep playing the old stuff over and over again, I don’t know, that’s only half the fun, I would say.

“Initially, when we got back together, ten years ago, we could have said you know what, let’s not even bother writing new songs, because fans just want to hear the old stuff anyhow, they don’t really care about any new albums.

“But then we said let’s give it a good chance and let’s try really hard and come up with stuff that is meaningful and relevant. Because, after all, we did it back then, why couldn’t we do it now?

“And that is what we have been doing ever since. And I think now, the new era of Accept is maybe as successful or even more successful than the old times, which is crazy, but it seems to have worked out alright.”

Is your wife, Gaby/Deaffy still active as a songwriter and manager?

“No. We found somebody to take over. I mean, she had been doing this for close to forty years. It was time for her to take it easy and she found a great successor, Antje with Continental Concerts, which is based in Germany. But she is still around, she is still my wife and we still talk about stuff, she is just not as heavily involved in the day to day operations.

“But she has always been a super-creative person. When it came to the album cover, I asked her and she had the idea of using a snake. So she is still involved, just not nearly as much as before.”

At the very next Accept concert, you are playing the last song, and you are allowed to bring on any guest musician you want to. Who would it be, what song would you play, and why?

“Bon Scott, singing Balls to the Wall. That would be quite an amazing thing.”

Finally, I see it is your birthday soon. Do you have a birthday present wish list?

“Yeah, I wish this Covid sh*t would go away. That is my birthday wish and by the looks of it we might almost get it because they are gonna start vaccinating soon.” 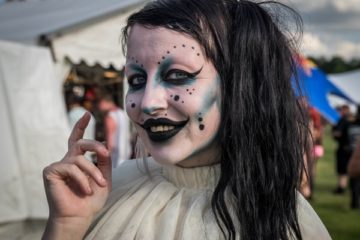