Waking up at 10.30 along with my other two room mates, the first observation was the lateness of our rising and we were only four days into the tour. I’m guessing this time next week its gonna be more like midday before we can drag ourselves out of our pits.

The second observation was that it was another glorious day, so after showers, shorts and tees were adorned.

Whilst the showering was in progress, morning TV with Phil Schofield was airing informing us that a ‘gay caveman’ had been unearthed, which in itself was humourous and sparked much debate. All the while, a half naked Luke was pummelling a ginger root with a honeypot, which added to more amusement.

On meeting the others we learned that Chris, on one of his nightly toilet trips, had returned to a bed which contained poor little Joe. He soon became the butt of more joviality and is now known as Chris’ b*tch – bless him, eh…

A quick coffee and bags piled into the steed, we headed off for our four hour drive to Portsmouth. With the location being known for its docks, we all agreed that we should pimp Joe out as a rent boy to earn extra funds.

More ‘Inbetweeners’ and we settled down for the ride with a quick stop in Ed’s town of Bristol. A small sense of de-ja-vu crept in before setting off again. 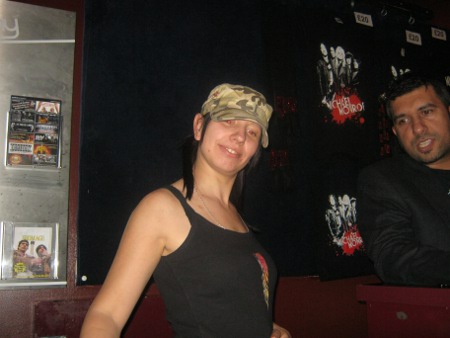 Heading off again, with more DVD action, we stopped halfway at Membury where people were picnicking on the grass – delightful. A quick wee stop and Burger King munch sorted out rumbling tummies.

Joe found a menu sign advertising ‘freshly baked muffins’ which soon got abbreviated (sure you can work it out). The sight of Matt wearing his black scarf (which he has been adorned with since the start of tour), sparked up jibes. Must say, even in this glorious heat, and me with my ice cold blood, I couldn’t manage a scarf.

When asked why the scarf was a permanent acessory, we received the simple answer, “style, fashion, purely for style.” Err, reasonable enough….I suppose!?

With a purchase of Purdey’s energy drink, the opportunity for a photo shoot and a hopeful endorsement opportunity was obtained, Mr Luke Purdie with his Purdey lips sponsoring the energy drink Purdeys – any takers?

With Yngwie Malmsteen now being the topic of discussion in terms of whether there is actually any feeling/passion being put into his playing or if he just likes showing off his speediness (check out his performance with the Japanese Orchestra and his concerto) we agreed that it is slightly excessive. Poor Yngwie. Clcik here to see the video.

Discussion over, we all settled back and the latter part of the journey began. Unfortunately, the new Ents manager, Mr Lazarus, had plugged himself in to his mega headphones and was locked away in muzak, so with phones in hand, we were left to amuse ourselves.

At precisely 4.00pm we arrived at The Wedgewood Rooms, Portsmouth. 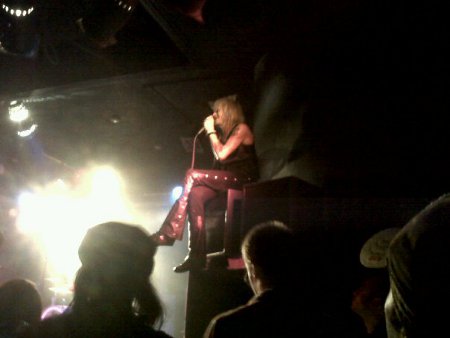 A little while later it was time for load in, which coincided with Michael Monroe’s soundcheck. Equipment in and the Voodoo guys sorted themselves out, so I took a chance to actually sit and watch MM in action.

It was really interesting to hear him jam out with the sax and harmonica. I didn’t realise exactly how much blues influence there was in his tracks.

Voodoo’s turn next and due to the efficiency of the sound guy it was not long before they were done, so we decided to have a wander around the town.

Passing public houses such as ‘The Florist’ and ‘The Contented Pig’ and quotes from ‘The Inbetweeners’ flying around with amusement and more comments on shop names, the mood was high.

It was decided to eat at one of the many Balti houses. Again due to time constrictions I had to leave for my post, leaving the guys to order.

Back at the venue, there was already a growing queue with at least half an hour to go. It was great to see that there were several posters with both of the support bands advertised. I believe it was the first one I have seen so far!

Doors opened at 8.00pm and they piled in, showing only mild interest in the merch area.

With New York Alchohol Anxiety Attack opening to a crowd of at least 100, they put on a great show even though most of them were down with the ‘flu.

A quick change over and shouts for Voodoo Six from the supporters and the boys came on to applause. It was a lovely atmosphere and again reflected through the guys’ performance. It was evident that the show went well from not only the feedback but sales too and a few new fans asking for cd signings after the show to which the guys obliged.

Another fast changeover and the now familiar intro tape kicked in. On came the Monroe troupe to much adoration, belting into the first song with admirable force. The lean frontman explained to the audience that he had been suffering from food poisoning from the start of the tour, and he apologised if he was lacking any energy.

He certainly could have fooled me as he was leaping around like a rabbit on amphetamines, twirling the mic stand, noosing himself with the lead and his feet never touching the floor, well, only once when he dropped down into the splits!! I wish I could have his boundless energy now, never mind when I get to his age!

The rest of the guys really looked like they were enjoying themselves, full of smiles and joking between each other, showing how relaxed and comfortable they are on stage. Not suprising with all the experience they have from their individual years of treading the boards.

‘Nothin’s Alright’ flowed through the ether and the crowd loved it!

‘I Wanna Be Loved’ had been given the makeover treatment. Halfway through, a familiar riff of ‘Eye Of The Tiger’ chugged through. A quizzical glance crossed many a face, which grew when it then changed into Michael Jackson’s ‘Billie Jean’. The puzzled faces soon dropped and within minutes, the crowd saw the humourous side and got back into the swing of it.

The band crashed back into the chords of the original track before moving on to ‘Moni Moni’ (not the Billie Idol version I was informed, but the ’60’s original).

Nearing the end of the set, Michael clambered up the PA and perched himself atop one of the large speakers to introduce the band. Much of the crowd were in awe at the spectacle.

I missed the rest of the show as I had to be back at the desk ready for the exiting, but judging from the crowd’s reaction as they left, shouting at each other due to temporary deafness, I could tell they had thoroughly enjoyed it.

Load out came, gear was shoved back on the van and into the darkness we went, ready for our beds.

‘The Narcissist’ marks studio return for Devil Sold His Soul 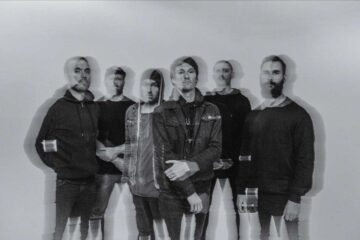