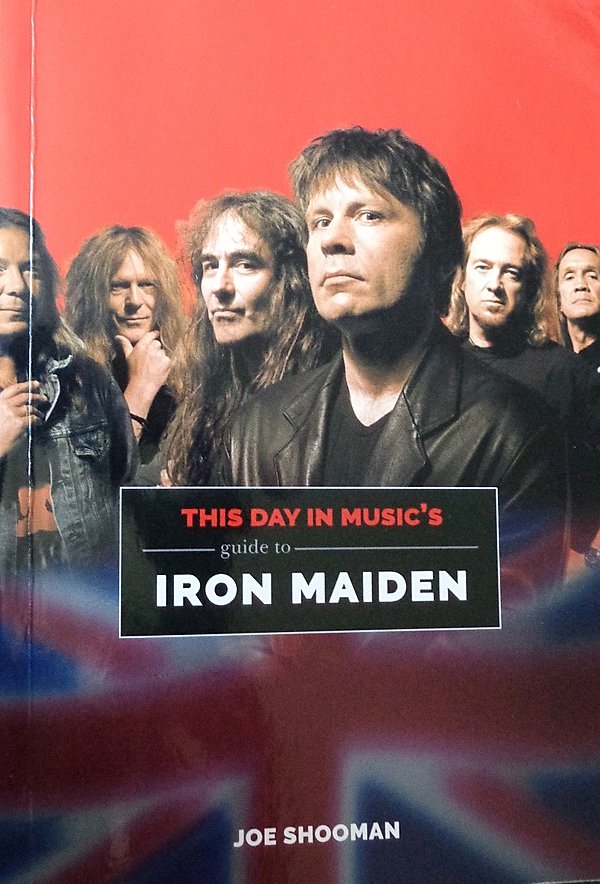 There are many Iron Maiden books out there now, both official and unofficial. Some are better than others. I’d put them into two categories.

Firstly there are general histories of the band such as ’30 Years Of The Beast’ by Paul Stenning or the official ‘Run To The Hills’ by Mick Wall. These will tell you the basics of how the band formed, their touring days and their many successes. Most Maiden fans know the general story by now. There’s little new to be found in these books for the hardcore fan.

Then there’s autobiographies of those closely involved such as Paul Di’Anno’s hilarious ‘The Beast’ or former drum tech Steve Loopy Newhouse’s excellent ‘Loopyworld’, which you can check out here. These books are good for inside information but of course they only tell their one side of the story.

‘This Day In Music’s Guide To Iron Maiden’ straddles the two genres. The author, Joe Shooman, who incidentally previously wrote the unofficial Bruce Dickinson biography ‘Maiden Voyage’, has done a ton of research and interviewed dozens of people connected with Maiden to come up with something genuinely new for the fans. This is trivia central.

Those of you who’ve read my articles on Kiss guitarist auditions and Kiss cover versions or have been to my Rock And Metal Pub Quizzes will know that I like my rock’n’roll trivia. Joe has really gone a step further in this book.

Rather than getting the official band story from Steve or Bruce, as has been told many times before, Joe has gone the extra mile and interviewed members of pre-Maiden bands such as Gypsy’s Kiss, Samson and Urchin, early Maiden band members such as Dennis Stratton, Terry Rance and Paul Mario Day, former fan club boss Keith Wilfort, people who have fenced against Bruce and flown with him and members of the myriad side projects such as Killers, McBrain Damage, Skunkworks and Primal Rock Rebellion.

He’s even interviewed Jeff Williams who played Eddie on tour in the late 1990s. I’m just mentioning a few here; the list is endless.

Ever wondered how Eddie gets into his costume or how his movements are choreographed? Ever wanted to know what songs Maiden asked singers such as Doogie White or Damian Wilson to learn when they auditioned to replace Bruce in 1993? It’s all in here.

In short, even the most diehard of fans will learn something from this book and as such I think it’s essential reading for the hardcore ‘First To The Barrier’ gang and fans of rock trivia everywhere. Very highly recommended!