Waking up feeling rather ‘foggy’ along with my roommates who were feeling the same. A shower and multiple cups of coffee were on the menu for all, followed by a good old hearty service station greasy fry-up.

Now I haven’t had chance to mention about Chris’ fascination with the evil Zodd from Superman 2 and his quirky sayings which are re-quoted daily by the 101 Pantera guitarist.

So, everyone – watch out cos Zodd is here. “Kneel before Zodd”. All you girls, watch out, as Chris will have you with his famous line. I suppose it’s one of those ‘you have to be here for it to be amusing’, but just imagine a black denim clad, dark haired guitarist coming up to you, stone-faced and in the most serious of voices exclaim that you should “kneel before Zodd” – just an hilarious scenario. Yes, simple things, but when you spend most of your touring life sat in a confined space of a bus with not a lot to entertain you, it doesn’t take much.

So, on this bleak and blustery day, we were back on the road heading for the home of Newcastle Brown for another night of rocking.

After our awful renditions, Matt took time out to check out the reviews of our previous gigs. It was actually disheartening to find out that in some of them, Voodoo Six weren’t even mentioned!! Come on peoples, the guys play too! Would be nice just to get something!

With us all looking and feeling like zombies, naps were taken and silence ensued as we got into our individual music worlds thanks to the joyous invention of headphones. Oooooooh! 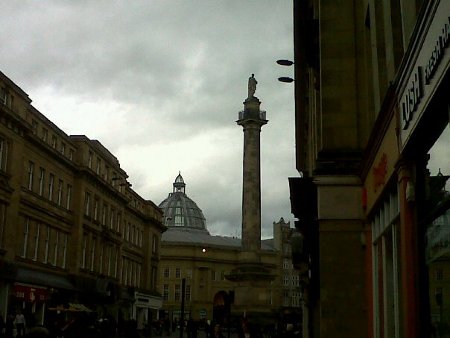 Little Joe Laz was so excited at one point when he realised that his fantasy women Cheryl Cole was from this area – so excited in fact he put it in his status on Facebook asking if she would mind coming down. Bless his little cottons!

With the scenery turning into rolling hills and cities sprawling across them, it was a far cry from Wales, but a sure sign we were ‘oop north’.

Being a Midlander myself, I do miss my chips, gravy and mushy peas, so hopefully that will be on the menu tonight. My word, you can tell the journeys are wearing you down when all you can think about is food and bed. Its not that the gig itself isn’t enjoyable, it truly is! Its fantastic to be part of the whole thing, to feel the atmosphere, to watch the band and the fans and to meet wonderful new people, its just the travelling that literally wears you out.

We arrived at the back of the O2 Academy at 3.00pm, with doors opening at 7.00pm and the Monroe guys not even soundchecked, we had plenty of time to load in.

It was revealed that due to ticket sales, we would be playing the smaller room at the very top. This involved no less than ten flights of stairs and was a blummin’ nightmare if you arrive dying for the loo.

After sprinting up and relieving myself with great satisfaction, I checked out the stage area. It was on the small size, adequately being able to hold at least 200. Being a Wednesday, I suppose it was unrealistic to expect many more, however, there were already a group of six eager fans all glammed up to the eyeballs waiting by Monroe’s bus for autographs.

Having being concerned about the actual logistics of the load-in, we were all very happy to learn there was a lift that took us straight up to the stage. So, in relay format, I stayed at the top whilst Tony went in the lift to help load/unload the gear whilst the others lugged it from the van. Fifteen minutes later, the gear was up, Tony got straight onto tuning whilst the rest of us decided to wander the streets of Newcastle.

Ed and Chris went alone looking for an elbow support for Ed who had injured himself at The Waterfront when the testosterone levels reached an all time high and an arm wrestling match had to be undertaken (men eh?), while Chris (now known as a ‘bloated Russell Brand) checked out clothes and more bling.

Matt had gone off on his own expedition and Luke had decided to get his head down for a power nap.

With all the boys doing their own thing, I went for a wander to see the sights. First stop was Guitar Guitar for a nose around the extortionately priced axes, even though some were beautifully decorated, then into Forbidden Planet for a gander at the Forgotten Realms section (yes, I’m a secret Fantasy fan) where I bought a book to keep me amused. 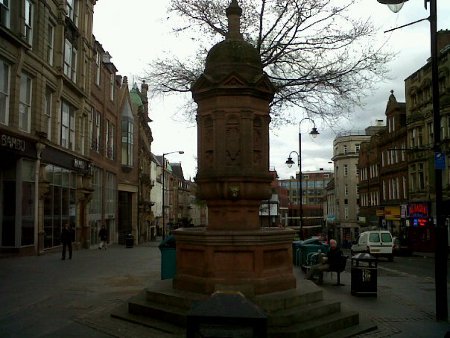 Whilst walking towards Greys Monument, I saw a familiar hooded figure at a cash machine, so with a good run up, I crash landed into an unsuspecting Mr Pearce who nearly jumped out of his skin. With a quick catch up of “what’s going down?” We decided to look for a coffee shop as I was in desperate need of a perk up and a supermarket for brandy for laters.

But no joy was found and I was desperately flagging so we headed back to the venue.

We arrived to find Chris stood outside talking to two obvious Michael Monroe female fans and Eddie standing there laughing at Chris’ attempts to charm.

No ‘kneeling to Zodd’ here then.

Matt decided to go and venture off to find the elusive supermarket and a coffee shop and the other two went to the stage to get ready for soundcheck.

With still three hours to spare, I decided to chill out in the peace and quiet of the dressing room. Matt on his return advised the coffee was at the Merch desk. Now, I have to tell you, that you may think its all glamour and fun for us ‘Merchies’ and most of the time, it is.

But when you are placed by the Gents toilets, a heavy, thick stench coming from the urinals as the door won’t shut (and this is before doors open), the prospect of having to spend five hours there doesn’t fill any of us with glee. Good job there was a can of air freshener on the bus which I quickly nabbed for later use.

So no showboating for us tonight! Grrr-eat!

The guys were busy soundchecking, so coffee in hand, I grabbed a quick snooze to boost my energy levels for the night ahead.

I awoke in time to get back to the stall for doors and set up. People started drifting in and making their way into the stage area, adorned with either the Michael Monroe ‘Sensory Overdrive’ or Voodoo Six t-shirts.

Ginger came to the area and promptly started selling his cd’s which brought much amusement from the merchie workers as fans didn’t believe it was him and when they did, some were too star-struck to come over. The brave few that did had the pleasure of having their photo taken and a personalised autograph.

It was time for him to leave to prepare for the show, so happy with his new found talent of merchy sales he set off down into the bowels of the venue.

Being out of the area and tied to the stall, I didn’t actually get to see the show at all, however it was certainly heard as it was right above us with the vibrations hammering through the ceiling to the floor below.

New York Alchoholic Anxiety Attack were already blaring through their set with an already captivated audience.

They finished to big applause which was fantastic to hear and it was also lovely to see people coming down after their set to enquire about cd’s.

The room itself was jam packed to the brim by the time Voodoo Six came on and the small army of Voodoo Six fans certainly let themselves be heard as the boys came on.

The set was solid, the boys sounded tight and gave a fantastic performance, which was reflected by the whoops and applause offered by the crowd.

Newcastle is definitely one of those towns that knows how to rock and the atmosphere was hot with body heat and excitement.

With a quick break, the roof lifted and the room went wild with whoops, cheers, shouts and mass clapping for Mike Monroe. The troupe bounded on and immediately blasted into their first track which morphed into the second and third. With the continuous assault of pure glam rock being pelted at the fans, the attendees were in ecstasy.

Michael and his gang were clearly enjoying themselves, especially with it being Ginger’s hometown, which gave an extra added spice to the night.

When it came to the encore, the thudding and roaring from the masses bayed out throughout every inch of the venue.

This must have been an awesome feeling for the guys as this was definitley one of the best receptions of the tour so far.

With the gig over, fans squeezed themselves into the Merch desk area, where Chris, Matt and Luke had joined me. Fans were eager to have their albums and t-shirts signed by the lads, which was again a great boost for the guys.

At one point, there must have been a crowd of 40 people gathered around the desk, all vying for photos or signings. Again, it was the best session I have seen since the headline tour last year. Newcastle has certainly raised the benchmark gig wise.

The venue emptied and we loaded out. Matt had some friends out on the town who he had promised to meet, so we headed into town to the Head Of Steam for a few bevvies.

After a couple, we all were feeling knackered so a group decision to head out to the Travelodge was made.

All of our bones and muscles were aching so the call of our beds was intense.

Arriving at the hotel, we checked in, only to find to our horror that the hotel had overbooked, taking us from three rooms to one, with the nearest rooms being over 100 miles away as all the hotels within the area being full too.

Not impressed at this, Ed took charge, however it was all in vain as the attendant would not budge. After an hour of trying to sort things out and extreme tiredness well and truly setting in, we all went for the one room option.

Imagine, five burly, tired and grumpy men and one exhausted Welshy Merchkin squeezing into a family room. The mind boggles, however, it was done and a welcome kip was had.