When you encounter a German band who predominately deal in Classic Rock and Metal, nine times out of ten the results are ‘wunderbar’. And the power packed hybrid that is Voodoo Circle come with a hefty reputation that has s been lived up to since their 2008 self-titled debut.
Voodoo Circle – Locked & Loaded (AFM Records)
Release Date: 15 January 2021
Words: Brian Boyle
As ever the ship is steered by band founder and guitarist Alex Beyrodt who has reunited the classic line up that recorded 2011’s’ successfull ‘Broken Heart Syndrome’ album. Right from the barnstorming opener ‘Flesh And Blood’ it sounds like a band who are making a statement and a bloody good one at that.
Alex Beyrodt told MetalTalk: “This constellation presents Voodoo Circle at its strongest, especially since the new material is practically tailored to our classic line-up.
“The truth is that I had written a dozen songs fairly early, before Mat [Sinner (Primal Fear, Sinner)] and I got together and decided that we wanted to embark on a slightly more retro and Led Zeppelin-oriented direction.
“Once the return of David and Markus was a fact, I sat down again and wrote some more numbers with that Led Zeppelin concept at the back of my mind. Because we absolutely wanted David’s charismatic voice and Markus’s brilliant drumming to play a prominent part in those new songs.
“In particular since Markus not only plays the drums like John Bonham but also looks almost like Bonzo reincarnated.” 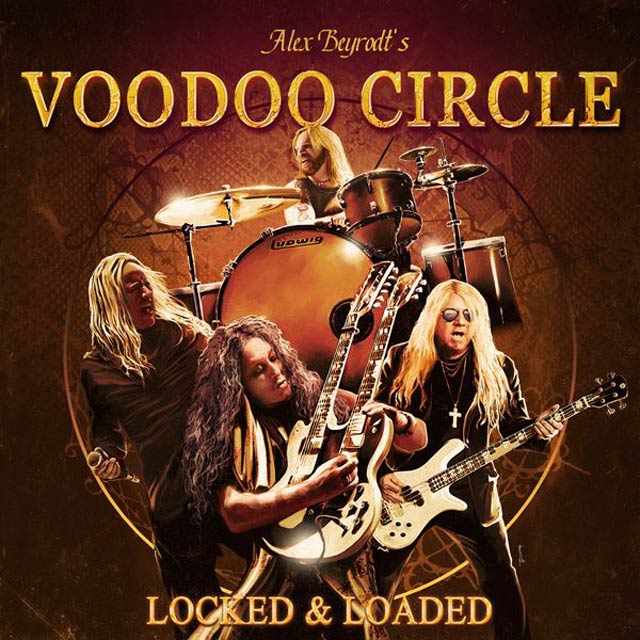 Although the blueprint of the album was to write Zeppelin fuelled songs, do not think for a second they are heading down Greta Van Fleet street. Songs such as ‘Wasting Time’, ‘Magic Woman Chile’ and ‘Devil With An Angel Smile’ do tip their hat in the direction of Plant and co, but on the whole the album is more traditional Classic fare in the vein of your Whitesnsakes and your Rainbows.
That is if you ignore title track ‘Locked And Loaded’ with its sickly Europop keyboards making it a nothing more than a meat free alternative to ‘Pour Some Sugar On Me’.
But the good far outweighs the bad on this record. ‘Straight For The Heart’ and ‘Trouble In The Moonlight’ are big and brash imposing rockers, while heavy handed ballads ‘Devil’s Cross’ and ‘Eyes Full Of Tears’ with David Readman’s Coverdale-esque vocals add extra class to already monumental tunage.
The rough edged AOR  of ‘Children Of The Revolution’ totally justifies getting the definitive line up of Voodoo Circle back together.
A Rock solid album and real return to form the hard hitting Germans.
LINE UP
ALEX BEYRODT (Guitar, Vocals)
DAVID READMAN (Lead Vocals)
MAT SINNER (Bass, Vocals)
MARKUS KULLMANN (Drums)
GUESTS
CORVIN BAHN (Keyboards)
MELISSA BONNY (Backing Vocals)
Tracklist:
Flesh & Blood
Wasting Time
Magic Woman Chile
Locked & Loaded
Devil With An Angel Smile
Straight For The Heart
Eyes Full Of Tears
Devils Cross
Trouble In The Moonlight
This Song Is For You
Children Of The Revolution
Tags:Voodoo Circle
0
Shares
Facebook Twitter Pinterest WhatsApp
Previous post

Mike Ross and Verity White swap gender roles for Baby, It's Cold Outside