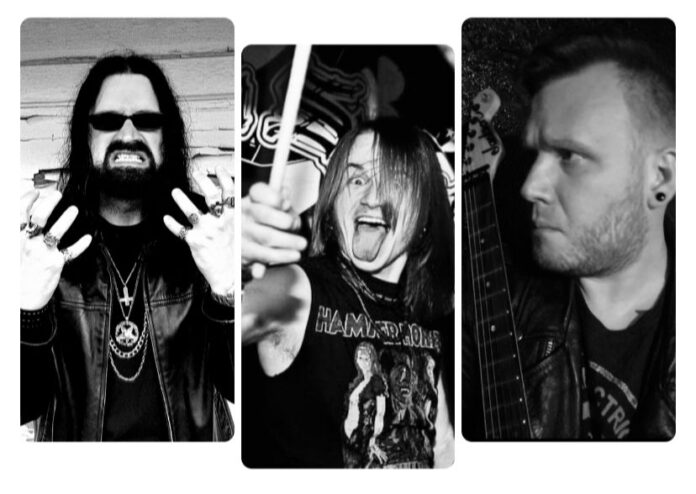 Opening with a spoken word ‘intro’ is a dying art, but this stirs memories of Manowar. Stirring stuff, and straight into the first proper song, Don’t Touch The Flame, and things start well enough with a solid riff made for headbanging. It’s when Preston’s falsetto begins that you raise a hand and say, “hang on a minute.”

This is a real challenge and very much an opinion splitter, making Virgin Idol an acquired taste very early on. The music is solid if unpretentious, with Michaels’s speed lead guitar work noticeable.

Satan’s Will features a few vocals in the lower regions. It’s a thumping, fist in the air track, slightly pedestrian in pace but not unlistenable by any means. There are inevitable comparisons with Bathory, Mercyful Fate and even Overkill and Metal Church, which come even more to the fore on the pulsating Do It Again, one of the more aggressive and powerful tracks on the album.

So, halfway through, the music is solid, and the vocals a cross between King Diamond, Rob Halford and occasionally Paul Stanley. What does side two have in store?

Moving onto Junji, which in true classic Metal style is a two-minute muscular guitar solo. Nothing like a bit of self-expression on an album that is all of 30 minutes. Now, the musicianship is impressive, and as a non-musician, I consider, with the very rare exception, solos are usually the opportunity at a live show to head to the toilet or the bar. This hasn’t changed my mind, however fantastic the arpeggios and fingerpicking are.

Demon Night provides a lull in the pace and performance, then thankfully, the opening part of Heartshaker has more balls about it.

Virgin Idol proudly proclaims, “This album is for fans of true Heavy Metal, shrieking falsetto vocals, flashy guitar work, and all things Metal. There’s something here for everyone!” For those who have gone the distance, it falls to the penultimate track, Russian Roulette, for possibly the best on the album.

I may be being a bit unfair on Virgin Idol. Steeped in the traditional Metal of yesteryear, they have poured blood, sweat and tears into this record. In many ways, the album is worthy of a listen.

Would I recommend it to a friend? Possibly, but with the caveat that the vocal delivery isn’t always as expected. If you can accept and embrace that, then Virgin Idol is probably worth a spin.