You would have to have been circumnavigating the world in a one-person yacht without a radio to know that since March last year, there have not been any gigs. Anywhere.

Apart, that is, from a single night at Plovdiv’s Roman Amphitheatre in Bulgaria, where on 18 September 2020, stalwart rockers U.D.O. played a one-off show for two and a half thousand fans.

And what a show it must have been. Over two hours of live Metal from one of the hardest working bands out there and they gave their audience a night of caustic entertainment. All recorded on this, their latest release. 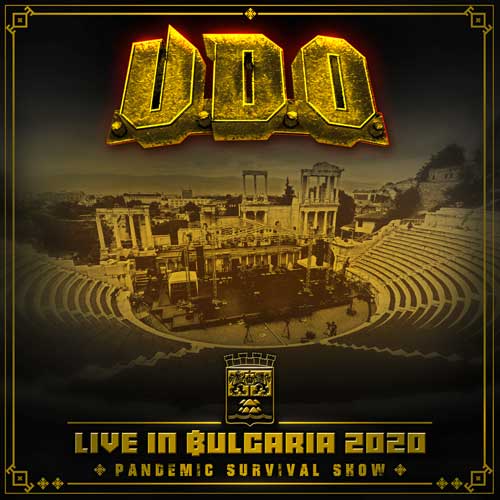 The brief orchestral intro which, given the venue it had to be, gave way to the high speed ‘Tongue Reaper’, followed by ‘Make the Move’, with its catchy stop-start riff.

Right from the start there is no mistaking Udo Dirkschneider’s rasping, chainsaw vocals. And unlike a lot of live albums, you can really hear the crowd joining in and adding to the atmosphere. The clear sound throughout is a tribute to Udo’s mate from way back when, Stefan Kaufmann, who has done a very deft job with the production. He drums, he plays guitar, he produces, is there nothing that man cannot do?

And while this is a U.D.O. concert, there is still some Accept history thrown into the mix, starting with ‘Midnight Mover’, complete with screaming vocals, deep backing voices and an absolute wall of super-tight Metal. If you want to know why some bands stick around for years, listen to this album, and you will find out that U.D.O. have still got it.

‘The Wrong Side of Midnight’ follows, which is a chugging, relentless track, with weird backing harmonies and a haunting, melodic guitar solo. ‘Metal Machine’ is next, a huge, driving song and again, you hear the crowd loving it.

This album includes a real cross-section of U.D.O. and Udo’s extensive back catalogue of music, like 1997’s ‘Independence Day’, along with mucho enthusiastic input from the audience. It is easy to see why the song is still on the playlist after all these years. I am sitting on my sofa, tapping my feet as I listen and I am loving it. 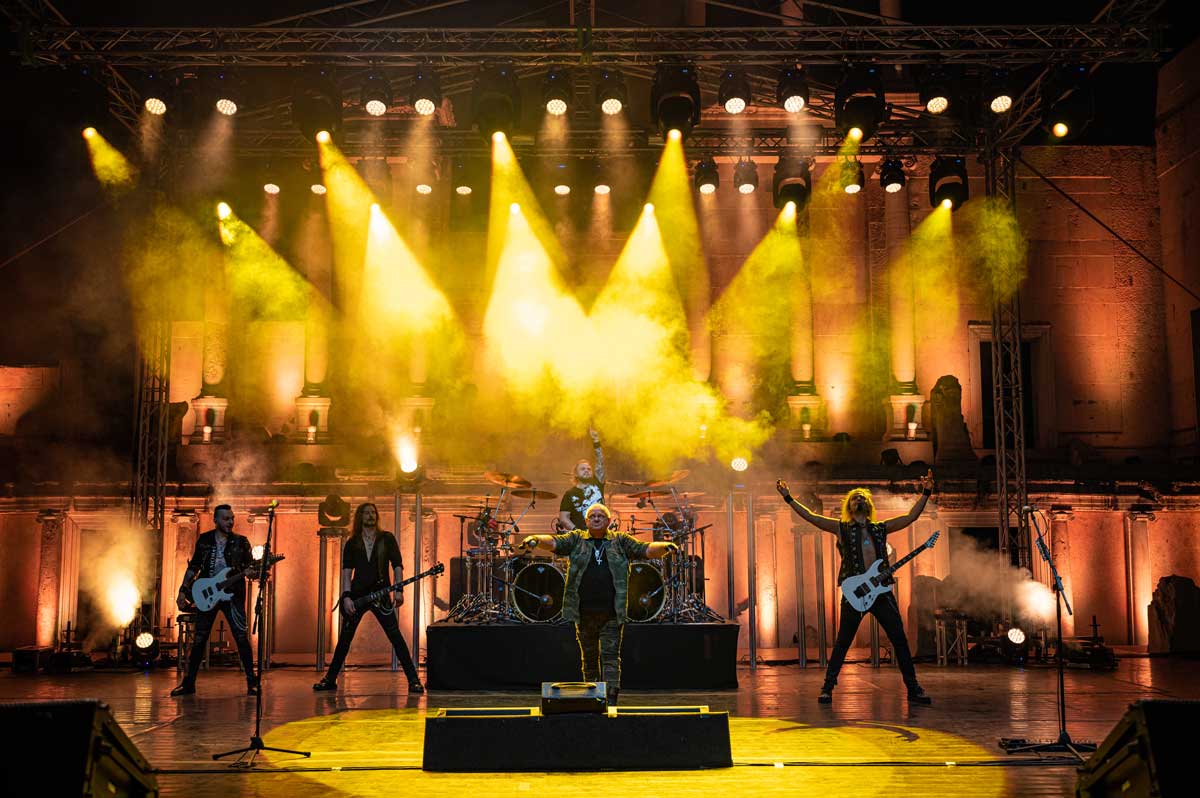 What must it have been like if you were there? Udo’s trademark scream cuts through the scything guitar riffs and machine-gun drumming. Then comes the inevitable and expected audience singalong that is as much a part of live music as the now-established band selfie at the end of the show.

Then, from a much earlier song, we are catapulted forward to the more recent ‘Rose in the Desert’, with its atmospheric, haunting start, accompanied by the whole arena joining in with hand clapping and deep-voiced chanting. It soon develops into a full-throated anthem, easily the most emotional song so far on this album.

‘Rose in the Desert’ is followed by ‘Vendetta’, a colossal Metal track with mile-high riffs. And by this point, you might be thinking there is a bit of a Metal formula going on, but don’t be fooled, because straight after ‘Rising High’ there’ is an instrumental track, ‘Prologue: The Great Unknown’.

This announces itself with a slow, symphonic guitar intro and when the drums kick in, so do the audience again, as the band take you right back to their first album and ‘Into the Darkness’.

If you ever thought that Udo Dirkschneider is all about full-on scream and nothing else, don’t, because this song gives lie to that, along with ‘I Give As Good As I Get’, another melodic, slow-opener that turns into a haunting Metal ballad. Unexpected, but definitely not unwelcome. 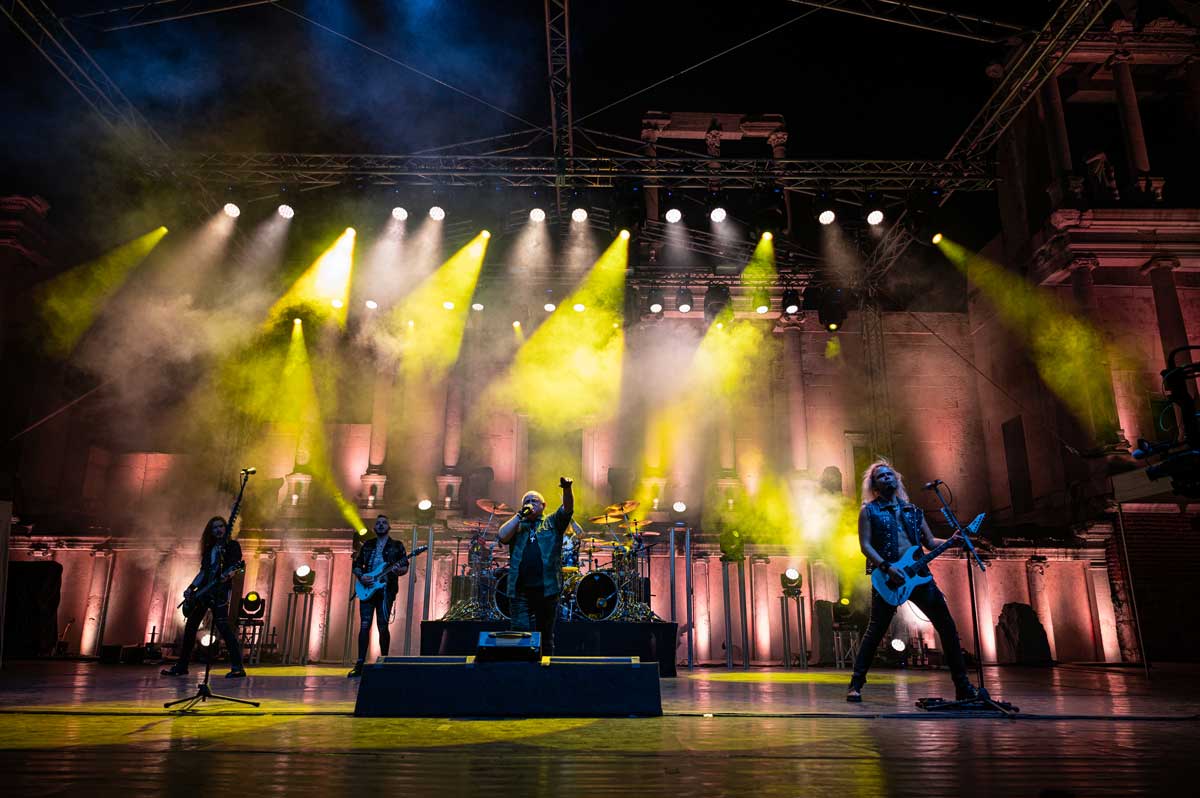 It has all been said before when it comes to this song, so just sit back and enjoy it and wish like hell you were one of the lucky two and a half thousand who screamed out the chorus line. And if anyone, anyone, was even thinking of sitting down at that concert, when this song started, there is no way. Everyone was standing and cheering and joining in, believe it.

‘Princess of the Dawn’ was always going to be a hard song to follow, but U.D.O. pick it right and accelerate to warp speed with ‘Timebomb’, a song that reminds you of Judas Priest’s ‘Painkiller’.

Let’s make this a night to remember

For the traditionalists out there, there is the drum solo, during which Udo screams out, “Let’s make this a night to remember.” It was already that!

And then we’re into ‘Hungry and Angry’, where Udo’s sing-talk lyrics, accompanied by his diabolical chuckle takes you right back to ‘Russian Roulette’. ‘One Heart One Soul’ brings us back to the present though. This song was released as a lockdown video, it is only right that it was also played at this concert.

And at this point, it’s “thank you very much, and good night.” But we know, you know, I know, it is not finished yet.

By this time, if anyone was clock-watching, the encores would have finished and it really would be time to go home. At this show, the encore has only just begun, and they start with the churning 2002 track, ‘Man and Machine’. Once again it is greeted enthusiastically by the audience, with the band also sounding as fresh as they did right at the start.

And then, Udo asks the most rhetorical question ever: “You want more?” Oh yes, we want more, and the chant heralds ‘Animal House’, the super-fast song that started the U.D.O. chariot of madness way back in 1987. And from this point on, it is the old, old stuff all the way.

‘Animal House’ hands over to another track from the same album, ‘They Want War’, with its Alice Cooper-like twisted nursery-rhyme intro, giving way to full-throated Metal. The audience join in again with the chorus. This is one of the most crowd-interactive live albums I’ve heard for a long, long time.

Thank you and good night

Udo calls out “thank you and good night” again, but it is still not over. For this encore, it is Accept songs until the end, beginning with ‘Metal Heart’ and it’s ode-to-classical-music guitar solo, amazing stuff. ‘Metal Heart’ is followed by ‘Fast as a Shark’, and by this time, there are “Udo! Udo! Udo” chants at every pause.

The final song, of course, is ‘Balls to the Wall’, greeted by huge cheers with the very first riff and the audience competing with Udo in volume at the chorus. For the long-term fans, it is one almighty treat from treatsville, but if you did not know the history, you would never know which songs were new, which were old, what ones were U.D.O. or which ones were Accept.

They were all played with an intensity and fluency that made them one. And then, finally, the curtain comes down on the album with a brief riff from ‘Stillness of Time’.

The absolute uniqueness of this concert always lent itself to a live recording, but this is so much more than just a contractual obligation, or a cashing in exercise.

This is a faithful recreation of what must have been a deeply felt need for normality, for close contact with our fellow human beings, for hope that life could return to what it was.

As well as one night of almighty Heavy Metal entertainment. And judging by this album, those two and a half thousand people got exactly that.

How lucky were they?

The Hawkins / 'Live In The Woods' is how music should be