Lindemann, the project of Rammstein singer Till Lindemann and Swedish multi-instrumentalist and producer Peter Tägtgren, will release their Moscow 2020 show on vinyl, CD and Blu-Ray on 21 May 2021.

The realisation of the problems about to besiege the world caused by the spread of the COVID-19 virus and the decree of the mayor of Moscow, S. S. Sobyanin, meant that the scheduled Lindemann shows were in jeopardy.

Promoters Volkov PRO and the band were able to arrange a solution with the Rospotrebnadzor. This Russian Federal agency works to protect wellbeing and consumer rights, and with cleaning measures in place, two shows were held on 15 March 2020, one at 15:00 and one at 19:00.

The two concerts were a great success and were recorded for posterity and captured visually by filmmaker Serghey Grey.

‘Live In Moscow’ will be released in five formats, including a super-deluxe box set, numbered and limited to 4,000 copies worldwide, containing the special edition album, two wearable masks with the faces of Till Lindemann and Peter Tägtgren, five art prints and a certificate of authenticity. 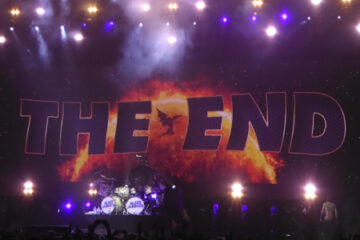