Goldy told MetalTalk: “We all brought our ‘A’ game to the making of this album. With the freedom to utilise the music we were all influenced by that started our musical endeavours to begin with. Hopefully, we expanded upon them in a way that will, in turn, inspire another generation of listeners to start a similar journey.”

Joining the trio again is Alessandro Del Vecchio, who has produced and co-written the album. The feel of the album again follows the mix of ’70s and ’80s hard Rock/Metal feelings, with the title track ‘Skygazer’ available to hear below.

Of the song, Goldy says: “it started out with a drum groove sent to me by Vinny. His unequalled playing style automatically inspired the music, and then [producer and keyboardist] Alessandro Del Vecchio wrote most of the melody lines and lyrics.

“Besides the music, I wrote the melody and lyrics for two pre-choruses that sum up the song’s meaning. It is a metaphor for the lengths to which our nations’ leaders will go to acquire, keep or grab more power for their own ambitions.

“That leaves us in their wake asking what measures are needed to defend ourselves. All of this comes at what price, though?” 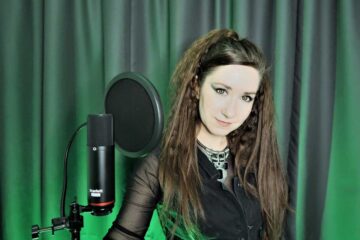