Dutch Avant-garde Death Metal “Kaiju’s”, The Monolith Deathcult return with their latest album, ‘V3 – Vernedering’, which translates as Humiliation. It is the follow-up to 2018’s ‘V2 – Vergelding’ and represents the final instalment of the V-Trilogy, all of which, for me, have been brutal works of utter genius.

The Monolith Deathcult have come a long way since their considerably more straightforward Brutal Death Metal early releases. Each subsequent offering has successfully built on its predecessor. 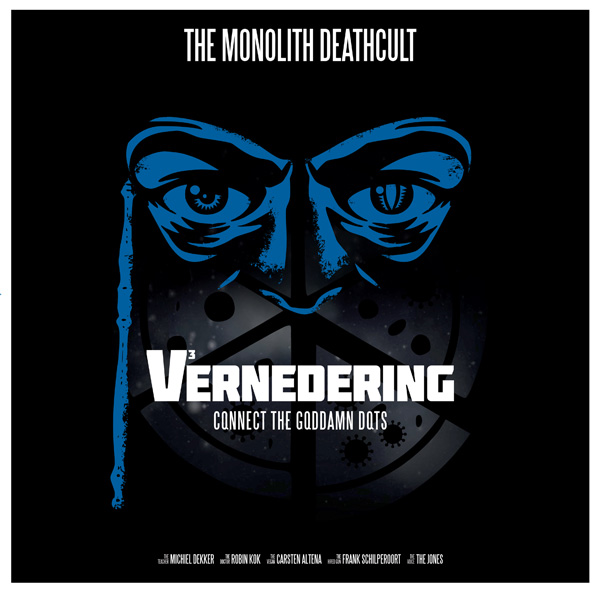 Noticeably, this trilogy is very atmospheric compared to those early releases. I’ve enjoyed every album from their brutal 2005 release ‘The White Crematorium’ onwards. The brutality and mesmerising unpredictability of their earlier material still exist, but it is delivered with increasing levels of sophistication, atmosphere and humour with every subsequent album.

The Monolith Deathcult hold the conviction that Death Metal has reached a ceiling in terms of speed. This is why the band has decided to broaden the genre by inserting previously “not done” elements into the style, adding further brutality and speed.

The band comment about this latest release: “Vernedering is a blood-chilling super-spectacle and the ominous last sorry chapter in the once-proud franchise of the V-trilogy.

“Despite being nominated countless times for the honourable Covid-escape, The Monolith Deathcult stays relevant (as fuck) and reinvented itself musically countless times like the most advanced shape-shifter.

“‘V3’ aka ‘Vernedering’ is THE soundtrack of The Great Rese(n)t and what we will build back better is a new artistic empire of shocking embarrassment. Our message is as blunt and brutal as a lead pipe: We, The Monolith Deathcult, are the new invincible gods, and the best is yet to come.”

From that comment, you can also tell ‘V3’ is packed with a healthy dose of their sometimes misunderstood, tongue in cheek pseudo-self-denigrating, dry humour, particularly in the commentary sound-bites. You either get their spirit, or you don’t. There are no half measures.

To push the brutal side, we find alongside the harsh but clearly delivered vocals, crushing riffing, searing leads and brutal drum battery, hugely atmospheric symphonic elements, particularly brass elements, electronic influences, an industrial aspect and a lot of very relevant and often tremendously funny sound-bites in even more abundance.
It is a meld that could readily go wrong, but in this case, has been executed with flawless sophistication making it a brutally powerful listen that is utterly captivating.

The opening humorous intro ‘Infowars’ is a conspiracy theory themed spoken piece that also possibly takes a surreptitious dig at their critics.

Then it’s straight into the dark and sinister industrialised chugger ‘Connect the Goddamn Dots’ with its squealing leads and gravelly growled vocal delivery. This takes a brutal upturn with the utterly mesmerisingly ‘Gone Sour, Doomed’, which quickly ramps up to become a brutal breakneck offering with some impressive bursts of frantic leadwork. This is a track that is in complete contrast to its predecessor, one of the many fascinating aspects about ‘The Monolith Deathcult’ that I enjoy so much, that ability to keep it varied and exciting.

The pace changes again, dropping back for the dirty, groovy and industrialised title track ‘Vernedering’, a superbly hypnotic offering with symphonic swathes and mid-point squealing leadwork, an epic listen which is at times like a cinematic score.

‘The White Silence’, centres on a haunting dark and brutal repeat riff, punctuated with equally brutal growling vocals, symphonics, spoken sound bites and superb mid-point leadwork. With ‘They Drew First Blood’ following in a similar vein but taking a more of a defined Brutal Death route alongside the symphonics, spoken sound bites and impressive leadwork swathe, which escalated to bonkers proportions in the second half. There are even minor elements that err on the brink of Hardcore.

The album closes on the almost eleven-minute monster instrumental ‘L’Ouverture de Morose’, which, as the duration suggests, is a smouldering and epic builder that fades and builds repeatedly. You keep thinking it’s ending, and then it’s back again, turning bleak and piano-led at around nine minutes, switching to one final hilarious spoken segment of two parts.

The spoken segments across the album may or may not be provided by the hilariously mad as a brush American radio conspiracy theorist Alex Jones.

Either way, this album is end to end as bonkers as it is brilliant. It walks that fine line between genius and insanity with style and flair, and I love every minute of it.

‘V3 – Vernedering’ was mixed by Guido Aalbers (Giesound) and mastered by Pier Durk Hogeterp with the production “handled by The Monolith Deathcult”. Cover artwork came courtesy of the band’s guitarist Carsten Altena.