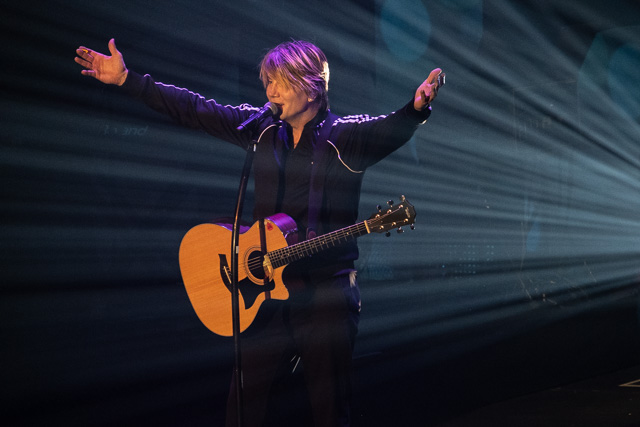 The term ‘cult band’ is a funny one. Whilst some can be niche in their appeal, others have hugely impressive material that should bring them massive success globally.

It could be argued that the Goo Goo Dolls fall into the latter category, absolutely huge in their native United States but less well known in the rest of the world barring breakthrough hit ‘Iris’. This relative lack of exposure this side of the Atlantic has done nothing to dampen the ardor of their very vocal fanbase who pack every show on their regular UK tours, as the rafter shaking response of the sold-out Roundhouse crowd attests. 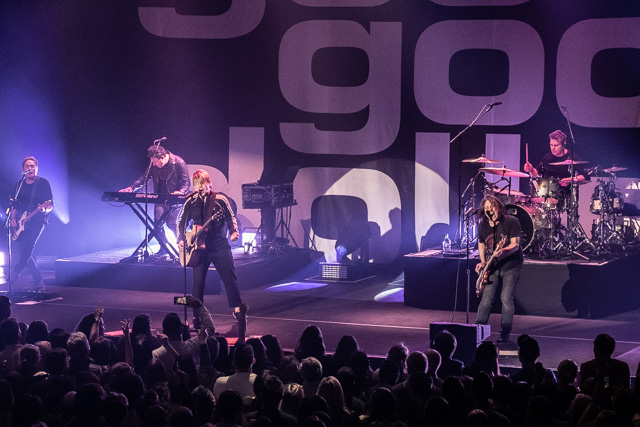 Following a stirring support set from Valeras, the lights dim and backlit by a sole orange light and clutching an acoustic, frontman Johnny Rzeznik looks every inch the rock icon as he strums the opening chords of ‘Indestructible’. When the band join him in a burst of technicolour light, the song explodes with its chiming guitar and frenetic, feel good energy, the floor of the venue instantly transformed into a sea of swaying bodies, caught up in a mass celebratory fervor.

Whilst Reznik has gone for an urban look, clad in a black tracksuit, his partner in crime, bass man Robbie Takac, is his usual punk rock self, constantly charging from one side of the stage to another in a whirl of energy. Barely pausing for breath, ‘Home’ keeps up the momentum, all jagged rhythms and some great backing vocals by keys player Jim McGorman but that was just a warm-up for ‘Slide’, the song eliciting the first of the evening’s full-throated singalongs. 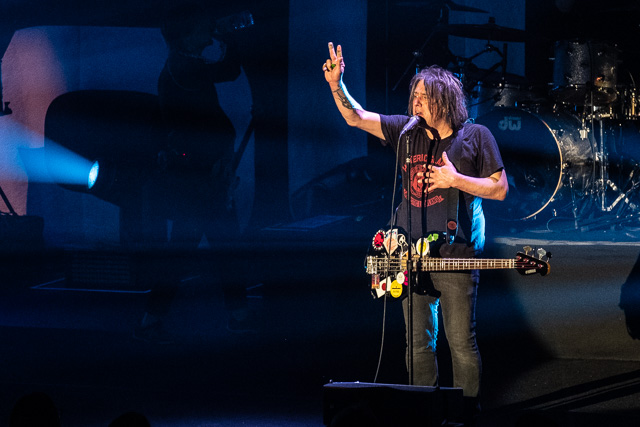 It’s not just the older tracks that go down well, with newer fare like ‘Miracle Pill’ and ‘Autumn Leaves’ proving that, even after twelve albums and almost three and a half decades together, there’s still plenty of juice in the tank. Fan favourite ‘Black Balloon’ sees a hundred of them released from a net on the ceiling, the band playing as they firstly rained down on the crowd and then spent the rest of the song bouncing around over heads.

Another heavy hitter followed, the staccato riff and percussive force of ‘Big Machine’ provoking another breakout of movement, yet again backing up the fact that their catalogue is full of highly impressive gems. Takac also gets a chance to exercise his vocals and front the band, singing lead on four numbers including Springsteen meets Green Day ‘2nd Time Around’ and the psychedelically tinged ‘January Friend’. 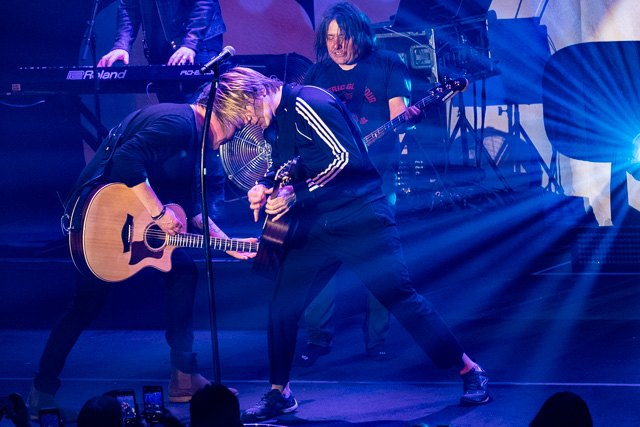 Never afraid of showing the breadth of their material, boneshaking rocker ‘Dizzy’ sits alongside the feel-good sing song rap of ‘So Alive’, the latter prompting a highly infectious call and response section. Another distinct change of gear follows as the rest of the band leave the stage as Rzeznik performs a beautiful solo acoustic ‘Name’ that sees the singer’s image being caught in a sea of mobile phone cameras. ‘Fearless’ is another new pop rock anthem and ‘Better Days’ plaintive optimism perfectly captures the sense of kinship between performer and audience, looking towards a future that offers bigger, wider horizons.

After the rock ‘n’ roll of ‘Stay With You’, what follows next is arguably one the biggest highpoints of the evening as the band break into a skyscraping ‘Autumn Leaves’, the song bursts and blooms from a pinprick to something that seems to engulf not just the North West London venue but the whole universe. Sounding like the music of the spheres, its otherworldly feel gives the chance to let firstly Brad Fernquist and then Rzeznik solo, their guitars ringing out loud and true. 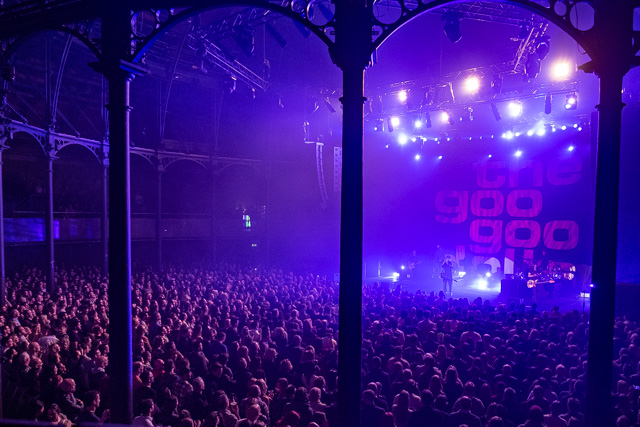 There was really only one song that could top that and with teased opening acoustic notes and mandolin the roar that greeted ‘Iris’ was at once deafening but also euphoric. Still one of the greatest pop rock crossover ballads ever written, it has the ability to just lift the listener and transport them body and soul into a place where music is everything.

Every syllable of every word is sung back to the band as the audience competes with the p.a. to see who can be the loudest, the dynamics of the song structure building and building up to the glorious slide solo and final, triumphant chorus. Closing the set with the breathless tilt of ‘Broadway’ the Goo Goo Dolls left the 45stage, their place in the hearts of the faithful assured and London well and truly at their feet.

‘Cult’ band or not, they’re still one of the finest acts on this, or any other, planet. 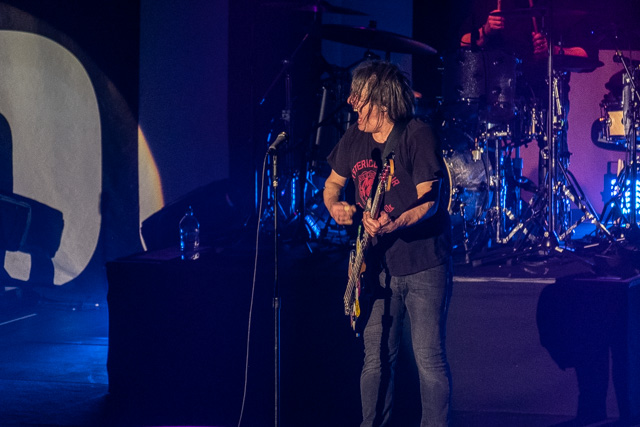 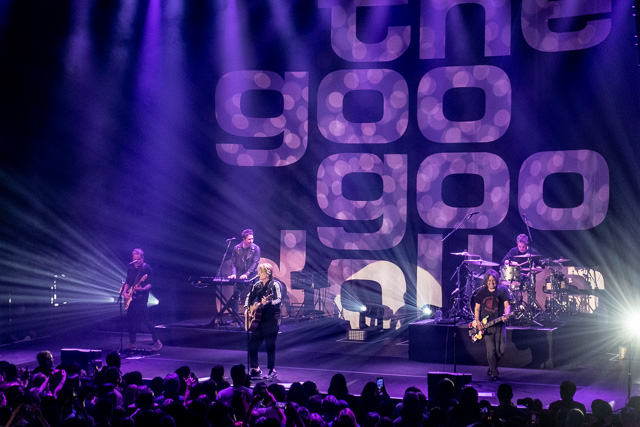