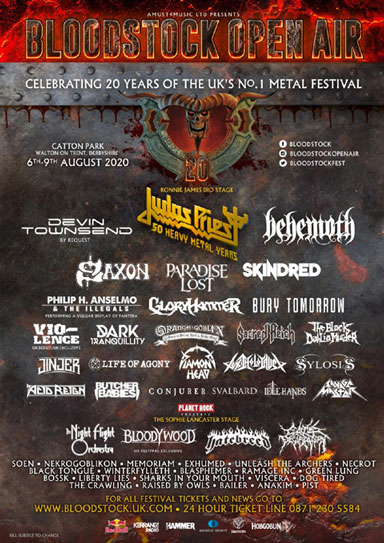 Bloodstock Open Air Festival, who this year are celebrating their 20th anniversary over the weekend of 6-9th August, have revealed that this years charity partner will be the mental health charity Mind.

Mind provide advice and support to empower anyone experiencing a mental health problem, and campaign to improve services and raise awareness.

As part of the Festivals support for Mind, Michael Lacy will be also holding a Patch Amnesty where you can donate old patches and browse for patches to buy.

Maria Khosla, Community Fundraising Manager for Mind, says : “We are grateful to the organisers of Bloodstock Festival and to Michael Lacy from Patch Amnesty for choosing to support Mind at this year’s event. One in four of us will experience a mental health problem every year so their support in raising funds and awareness means we can continue to make sure that no one has to face a mental health problem alone.”

The Derbyshire Festival have already announced a large line up, including the weekend headline acts DEVIN TOWNSEND (Friday), BEHEMOTH (Saturday) and JUDAS PRIEST (Sunday). Now the bill has been boosted by a further six acts.

Savage Master, who hail from Kentucky, will open the Ronnie James Dio stage on Saturday with their traditional Heavy Metal sound. ‘Myth, Magic & Steel’ was released in October to great acclaim and there are some rippers on the album – their contemporary take on the historic NWOBHM style is refreshing.

Italian blackened Death Metal Demons Blasphemer, who released their concept album ‘The Sixth Hour’ in January, play The Sophie Lancaster Stage on Sunday. Blasphemer are also on the bill at Incineration Fest, London (9th May). Here is ‘The Deposition’:

Hailing from Hull, Black Tongue will also perform on The Sophie Lancaster Stage on Sunday. The five piece down tempo doom band recently added their latest album ‘Nadir’ to YouTube in full. If you like your Metal deep, heavy and occasionally violent, then you are in for a treat with ‘Nadir’.

Joining Black Tongue and Blasphemer on Sunday are PIST. Well known on the Manchester Metal Scene, PIST have produced a dynamic second album, ‘Hailz’, which gives them a great spring board for the future. From their latest album, catch the track ‘Mind Rotter’ here:

Finally, the Italian post-hardcore band ‘Sharks In Your Mouth’ will grace The Sophie Lancaster Stage on Saturday. ‘Sacrilegious’ was released in 2019, and you can watch the video for their newly released single ‘Gone’ here:

Standard weekend tickets, VIP tickets, child tickets, and car parking tickets for 2020’s event are available now at the Bloodstock website. A limited number of day tickets will go on sale later this year. Campervan tickets for 2020 are already sold out.

Previous articleTHE GOO GOO DOLLS: ONE OF THE FINEST ACTS ON THIS, OR ANY OTHER, PLANET
Next articleINTERVIEW: BIFF BYFORD GOES BACK TO SCHOOL