Glenn Danzig hasn’t toured the UK much and when he does it’s usually just a couple of dates in England. In fact, since the band’s inception in 1988, Danzig has played a grand total of just three Scottish shows – two at Edinburgh’s Playhouse supporting Metallica in 1988 and a headlining show at The Barrowlands in September 1992, the latter of which was a show that I feel particularly lucky to have seen.

The recent announcement that Danzig were to play some European shows (eight in total including a show at Wacken) was met with surprise – not least in Glasgow where many people I know who’ve never mentioned him before were suddenly spreading the good news.

The addition of Paradise Lost to the mix ensured a near sell out show, as I once again ventured to the venue where I’d last seen him some twenty-six years previously (almost to the date), older, wiser and certainly more sober than I was back in the day. 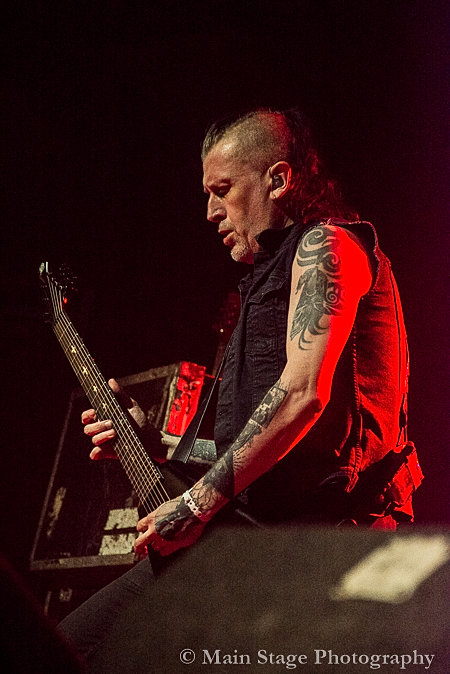 I’ve lost count of the number of times I’ve seen Paradise Lost over the years, but this was my first look at them on a stage for a decade or more with the only change in the line-up being the addition of drummer Waltteri Väyrynen in 2015. As a twenty something in the mid-nineties, ‘Draconian Times’ was barely off my CD player and it remains, in my view, their best work, although their most recent album, 2017s ‘Medusa’ comes very close.

Not the most energetic of performances, but nonetheless it was a solid effort from the quintet as they powered their way through their set. Frontman Nick Holmes’ vocals were shrouded by the guitar and drums for most of the set, but you could see the effort he was putting into every single song. Guitarist Aaron Aedy seemed to be having the time of his life – singing along and throwing shapes whilst keeping the rhythm guitar track strong and consistent, occasionally battering his guitar in time to the bass drum beat for a bit of extra theatre.

Holmes didn’t say much in between songs (did he ever, though?) but he does his best to encourage the audience to get involved during some of the number – not a completely thankful task as he eventually elicit a sizeable response from them in the latter half of the set. 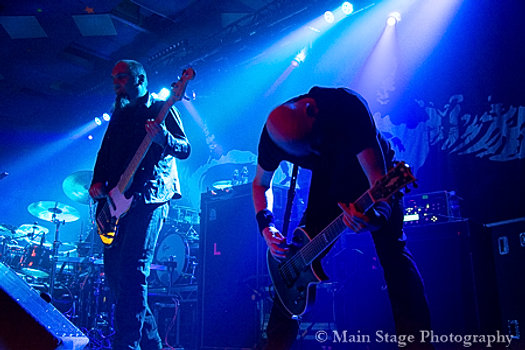 Musically, it was predictably ‘As I Die’ that got one of the biggest cheers of the set, along with ‘Faith Divides Us – Death Unites Us’, however, a somewhat strange inclusion was their cover of the 1984 song ‘Smalltown Boy’, originally penned by British synth-pop group Bronski Beat and covered on the Paradise lost album ‘Symbol Of Life’ in 2002.

“If it all goes to shit tonight we’ll not play it tomorrow night (in London),” joked Holmes but thankfully it all went well. This peculiar Doom Metal version (complete with keyboard backing track) giving a new spin on the thirty-four-year-old song.

Far too early the band wrapped up their set with a quick “thank you” and they were gone. A short set for sure, but one that’s once again reignited interest in the band. Now where did I put that copy of ‘Draconian Times’?

No Hope In Sight

Faith Divides Us – Death Unites Us 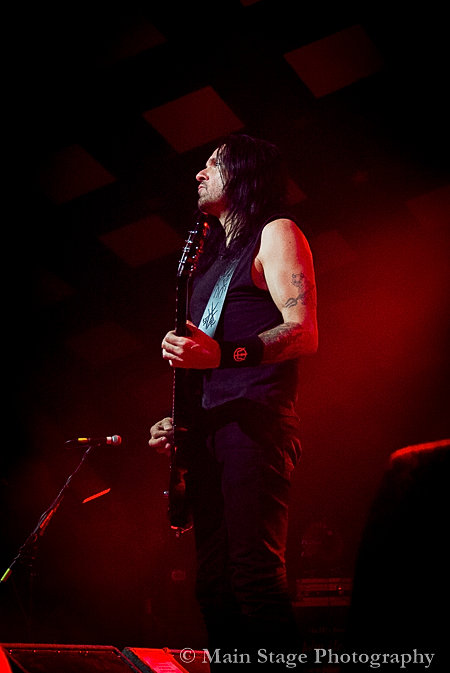 The last time Danzig graced the Barrowlands stage, the ‘Danzig III: How The Gods Kill’ album had been out about six months and was, arguably, the end of a strong run of three albums. From here on in, he’s experimented with his sound and subsequently the albums would suffer because of that before a resurgence took place in 2010 with the ‘Deth Red Sabaoth’ album and continued with ‘Black Laden Crown’ which was released via Nuclear Blast in 2017.

Anticipation was high as the Danzig crew got things ready just after 9:00pm, however, it would be another forty minutes before the band broke cover with the natives getting especially restless as the clock ticked past the 9:30 mark. According to sources in the venue, Danzig apparently disappeared an hour before the show and organisers feared a no-show situation but somehow, he was tracked down and safely returned to the venue, thus avoiding a riot from the expectant crowd.

A no-photo rule for all the punters gave everyone something to talk about – was this an ego trip or a conscious effort to force people to enjoy the bands performance live, just like they did in the old days as opposed to the modern way of looking through a screen?

As the band came on stage it was clearly an ego trip, as the photographers with photo passes in the pit were rather unceremoniously ejected from the photo pit by what appeared to be Danzig’s own people some thirty seconds after Danzig bounded onstage (why issue a photo pass if the recipient is unable to use it?) whilst event staff down the front shone torches in the faces of anyone caught hoisting their mobile phone stagewards.

Bass player Steve Zing had issues early on with the onstage sound not to his liking but some gesticulating and pointing at various monitors has the sound technicians on the ball to get it sorted and once it was he settled into the show. Guitarist (and Prong mainman) Tommy Victor, on the other hand, was loving every minute of the show, pacing the stage grinning from ear to ear as he the out the rhythms. At the back, Johnny Kelly anchored the band down with his heavy drumming that barely lightened up all evening. 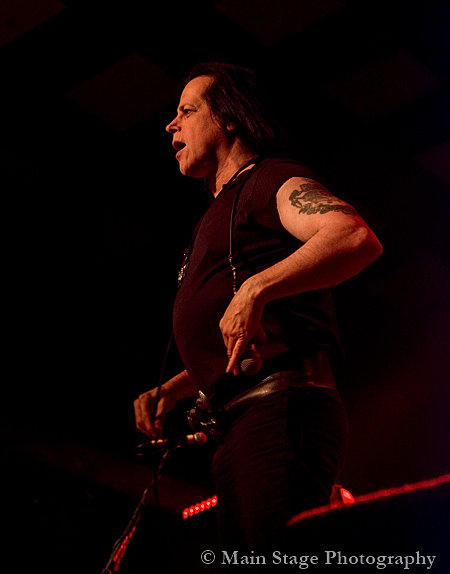 Danzig himself was on form and his frenetic style calmed down into a more structured performance after the first couple of numbers. Occasionally crouching down out of the view of everyone but those tightly packed against the crowd barrier, he kept his on-stage banter to a minimum but never really looked like he was having fun.

New songs ‘Eyes Ripping Fire’ and ‘Devil On Hwy 9’ were tripped out early with the latter still amongst the best. The rest of the set was made up of stone cold Danzig classics like ‘She Rides’, ‘Twist Of Cain’ and ‘Am I Demon’ from the self-titled debut album along with the ubiquitous ‘Mother’ closing off the main set whilst ‘Her Black Wings’ and ‘Tired Of Being Alive’ from the 1990 follow-up album were also well received.

Album number three, 1992s ‘How The Gods Kill’, was extensively plundered too, with ‘Dirty Black Summer’, ‘Left Hand Black’ as well as the title track getting an airing with the latter having the Glasgow choir in full voice during the intro whilst ‘Do You Wear The Mark’ became the set closer after ‘Snakes Of Christ’ and ‘Long Way Back From Hell’ were both dropped due to time constraints.

The evening was a loud, rough and ready performance from a man making his second (and more than likely his last ever) performance in Glasgow so if you weren’t here you certainly missed out on a performance that might become as legendary as his 1992 performance at the same venue was, but not for the same reasons.

Not Of This World

Tired Of Being Alive

How The Gods Kill

Do You Wear The Mark