The Big Interview / Kill The Lights’ James Clark on ‘The Sinner’, battling mental health and hopes for 2021 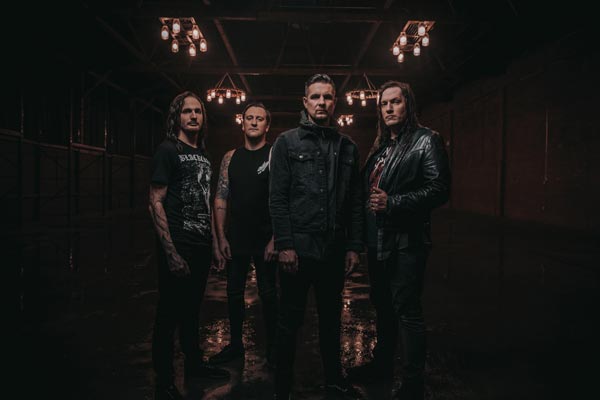 The thirteen track monster is a screamer of a debut, with styles harking back to early millennium Metal, while still remaining modern and varied and ‘The Sinner’ is sure to feature on many ‘Best of 2020…’ lists.

MetalTalk editor Steve Ritchie spoke with vocalist James Clark to find out more about the Kill The Lights project and how this rollercoaster of an album came together.

MetalTalk: You guys have crossed paths on the road before. Can you tell us more about how the band came together? Who was the driving force?

James Clark: “The whole band started with a bottle of wine or three and a text from Moose to Jordan. Moose missed playing after leaving Bullet and had toured with Jordan on multiple occasions over the years and had always kept in contact. Moose’s first thought was to reach out to Jordan and see if he had any songs that Moose could jam along to. Luckily, Jordan had been writing a ton and fired Moose a bunch of songs to write too.

“Fast forward six months after trying out various singers and Moose posted a vague Facebook post asking if anyone knew of any good singers. I responded (we toured together in 2013) and asked who the band was and what they were looking for.

“I think his response was – ‘it’s my new project and we need catchy and heavy!’ I went into the studio and recorded a demo which ended up being the song ‘The Faceless’ – our first single. I recorded a few more songs, flew out to Michigan to meet Jordan and Moose for a writing session a month or two later and got offered the spot.

“We spent a further nine months writing and recording material before we decided to go into the studio with Colin Richardson and Chris Clancy to start the record. Chris has toured with Travis and recommended we reach out and send him some material to lay some solos over. Within 48 Hours, Travis had three solos completed and we knew instantly he was our final piece to the band.”

How did you feel about the success of ‘The Faceless’? While maybe not a surprise, it must have validated your expectations for the band as a whole?

“It was a very weird feeling, before releasing ‘The Faceless’. While it was super exciting, it was also very nerve-wracking. With each band member having success in the past there was a sense of expectation and pressure that most new bands would not experience on their first release.

“Thankfully, fans took to the track and embraced what we were doing musically and lyrically, which was heartwarming and a huge relief.” 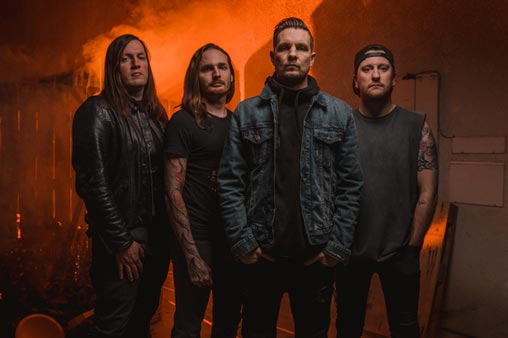 Moving across to the UK to track the first couple of songs, and self-funding too, was an interesting approach. How did you get to the point where you thought that was a risk worth taking?

“We were confident in the demo material we had produced and had been in contact with Colin Richardson (Producer) from the very start of the process. He gave us the confidence that what we were doing was worth the risk.

“We also wanted to control the process and not mess around with shopping two or three songs to a label at a time. We chose instead to complete the record and hand over the finished product.

“We felt doing it this way would show the potential label the full vision and style of what we were going for.”

Congratulations on the new album. As a thirteen track piece of work, it is superbly Metal, but with a great variety of styles on there too. You must be very happy with the final piece as a whole?

“To be honest, we couldn’t be more proud of our first release, ‘The Sinner’. We worked our asses off over the last two and a half years to put the album together and it’s great to finally have it see the light of day.

“During the writing process, we really wanted to have a mix of songs that allow the listener to experience a range of emotions and feelings. I think the album takes the listener on a rollercoaster ride with ups and downs and leaves you with a sense of hope, while accepting that we all have struggles and challenges in life.” 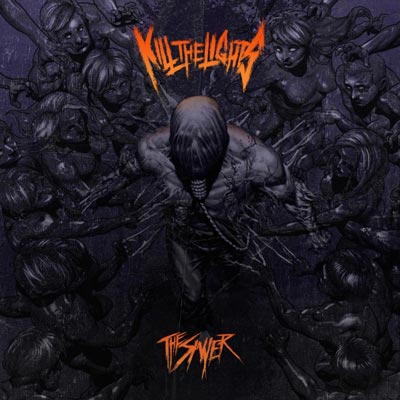 Opening track on ‘The Sinner’, ‘Shed My Skin’, is a cracking way to suck you into the album…. threatening opening, spoken into, then BAM!! … Riff smashes into life and a great melodic chorus. That was always going to be the album opener?

“We discussed different options and took quite a while deciding the album sequence, but inevitably always came back to that song for the opener. It really sets the tone for the record and melts your face from the start.”

‘The Enemy’ is another great track… fantastically fast guitar opening, another stomping song with great chorus…. How will songs like this come across live? Does the live aspect feature in the song composition too?

“Most of our writing is done thinking about the impact that it will have in a live setting. As music fans ourselves there is nothing better than hearing a song live that makes you want to race to the pit and sing along with every word.

“There is a ton of feelings and emotions captured on the record both musically and lyrically, and I feel this is going to translate well live.”

And great to sign with Fearless Records too… did that happen quickly? Were there other offers, if so, what made them attractive partners?

“The process of signing with Fearless took a while. I think it was around a year to wrap up the whole contract process. We had lots of interest from other labels, but loved the vision that Fearless had for KTL and they got what we were doing stylistically.

“Fearless made us feel part of their family early on, which was great, and they emphasized that it was going to be a long-term relationship over many albums, which gave us great confidence in their team.

“We liked the diversity of bands on the label and the lengths they had gone to support and break those bands.”

You are open about you mental health. It’s good to be able to talk about these things, as many other people may be experiencing similar, but not sure where to go and how to deal with things. How are you right now and how did you look for help?

Was it a single moment where you felt you needed more support?

“I have been struggling with anxiety and depression my whole life, but had never been able to identify it.

“My anxiety started getting bad when I was diagnosed with cancer in 2010 and then again when my children came into the world. I have always been a person that worries about everything, but now I had a lot more to worry about besides myself.

“I had a few panic attacks last year that came from nowhere, which resulted in a hospital visit.

“It was then that I realized that I should talk to someone and seek help. I am honestly a work in progress and have good and bad days like anyone else, but try to take each day as it comes and push to be as positive as I can.”

In the music industry there can so much negativity, worry, stress… it’s not like it’s a regular paid job…. it must be hard to balance everything. Do you have good coping mechanisms now?

How would you advise musicians who may be struggling with their craft as well as their health?

“The music business has always been a cut-throat industry and what with the global pandemic, there are no guarantees about anything right now.

“My advice is to always have a back-up plan and do not rely on ‘making it’ as your only option, as you are setting yourself up for failure.

“Network with other bands and musicians as much as possible, as you never know when a quick introduction to someone can change your career.

“A good example is my relationship with Moose and the chance I got to audition for Kill The Lights. This stemmed from a Bullet For My Valentine tour in 2013 and a friendship that was created due to that.”

“The last piece of advice is to reach out for help and talk to people when you are struggling.

“You will be surprised how many people are willing to help and are in the same position as you.”

We hope to see you in the UK in March, COVID-19 permitting…. It must be a difficult time to bring out an album, with so much uncertainty in the world?

“We cannot wait to get over to the UK in March and connect with the fans who have been with us since the start.

“Growing up in the UK and having all my friends and family at these shows is going to feel amazing for me.

“It is a very hard time to release a record right now, particularly during a global pandemic, but we did not want to sit on the record any longer.

“Now is a time more than ever that people are struggling with mental health issues and life in general. We felt that the record helped touch on some of these struggles lyrically while offering a sense of hope to those in need.

“So many of us, including myself, turn to music in times of need for comfort and strength and use it to help weather the storms.

“I hope, if anything, that Kill The Lights can create a sense of community and inclusion that lifts people and teaches them that they are not alone and it is ok to ask for help.”

Good luck for the album and tour… and message for our European readers?

“We just want to thank you for your support and cannot wait to see you out on the road.

“It’s been a crazy 2020, and we just hope that we can all get back to normal as soon as possible.” 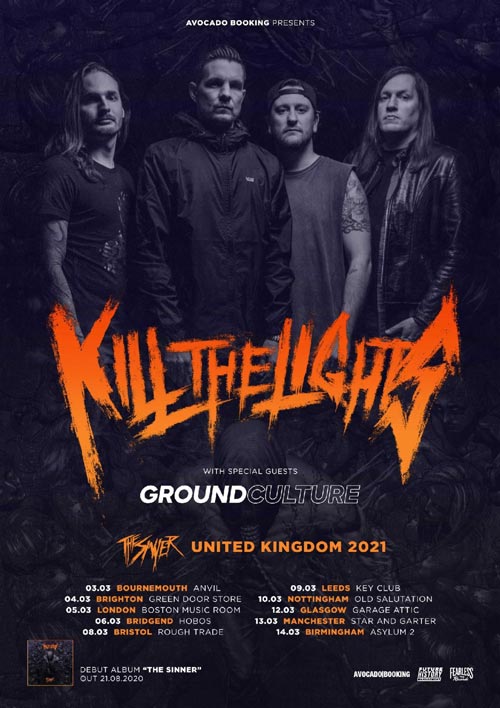