From the land of stunning natural beauty, incredible design and pop behemoths ABBA, comes this kaleidoscopic release that covers so many different musical bases it’s almost dizzying to listen to it.

The Airwaves – Bitchy One

Built around the duo of Sussi Johansson, lead vocals and bass, and Patrik Arvidsson on guitar, the band have drafted in a number of special guests to add their own sparkle to this eclectic album, each adding another layer of sonic delight.

Former Black Sabbath frontman Tony Martin brings his classy and powerful vocals to album opener ‘Metal Heart’, a big and ballsy 80’s style rocker. It is an excellent way to kick things off but the Swedes have other ideas and ‘Part Time Punks’ switches from Metal to fun and poppy New Wave, the sing song lyrics and vocals from Johansson bouncing along. 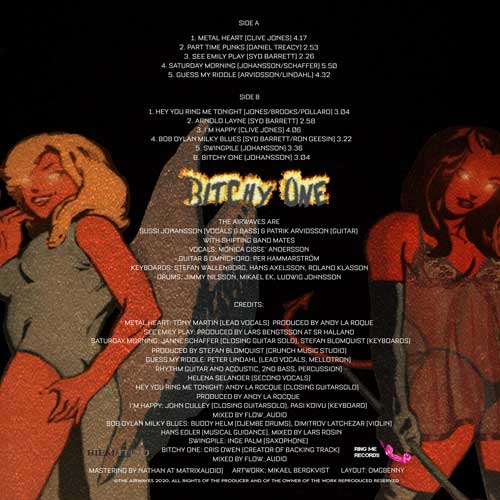 From punk to prog, The Airwaves give the first of two Pink Floyd tracks, ‘See Emily Play’ an exhilarating new sheen and follow this up later with their version of ‘Arnold Layne’ which also adds some new colours to the track.

ABBA guitar legend Janne Schaffer lends his fretboard magic to the laid back ‘Saturday Morning’ and ‘Guess My Riddle’ is full of psychedelic whimsy with a sting in the tail with a scorching solo.

There are more echoes of the country’s biggest musical export in the form of bright tribute song ‘Hey You Ring Me Tonight’ that manages to squeeze in numerous lyrical nods to Agnetha, Benny, Bjorn and Anna-Frid, along with quicksilver guitar work by King Diamond’s Andy La Rocque.

‘I’m Happy’ channels Blondie and the Sex Pistols before we head off to mellower climes with the ‘Bob Dylan Milky Blues’ and the gloriously laid-back jazz of ‘Swingpile’.

By the time we get to the closing title track as it heads back into the high energy punk/pop territory you have to start wondering if this is a work of mad genius or a seriously fractured mind with a scattergun approach to grabbing elements of their record collection.

Either way, it is unlike any album you have heard before and with a wealth of different styles and guests it is well worth investigating. Probably the most unique thing you will hear this year and very much an exercise in love.

The album can be purchased from https://www.diggersfactory.com/vinyl/234515/the-airwaves-bitchy-one 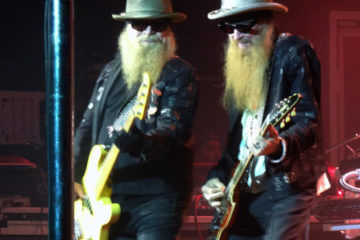