Doug tells us that writing with Glenn Hughes was a new adventure, and we think it has produced a great record. Here Doug walks us through his writing process with Glenn and The Daisies, and how the band are planning for 2021.

“We’re really excited about it. We recorded it in the south of France at this amazing chateau where the band could live and record as well. As you know, we have got Glenn Hughes in the band now, so we needed some time to gel as a group. We would wake up, have breakfast together, then go jam.”

Doug also walked us through his experience writing with the Voice Of Rock and what Glenn has brought to The Dead Daisies.

“I knew it would be amazing! Glenn is just so musical in everything he does and he really brought a lot to the band. There was nothing wrong with the lineup before and we love those guys, but we just wanted to have a fresh start and start a musical revolution with the band, and getting Glenn was just the perfect opportunity for that. He said ‘Doug, it’s time for us to make some music together'”.

On the way that The Dead Daisies approach song-writing.

“You can overthink things sometimes, so we just went with it. If I had an idea I would go to Glenn and ask him what he thought and he would say “well I love this part, maybe it can go here”, then he would pick up a guitar or bass and have it finished in a matter of minutes.”

On his hopes for the future of The Dead Daisies.

“Well hopefully we are going to go on the road this year. I think we start rehearsals in March. We have got a brand new show, a new production. We are totally starting fresh. I am hoping by May or June we will be clear to travel.”

Doug also spoke to MetalTalk about some older projects from his very impressive discography. From his work with the late great Ronnie James Dio, to joining Whitesnake and creating their acclaimed ‘Good To Be Bad’ album with David Coverdale.

On working with Ronnie James Dio.

“It was an amazing experience with that band. We did the ‘Killing The Dragon’ album. Actually Jimmy Bain was key to me getting in the band… he called me two days after Christmas and said “So Doug, what do you think about playing a few solos on the new record?” I said no, I want to play everything! [laughs]. I want to be the new guitar player – Ronnie goes “Ok, you start tomorrow!”.

On joining Whitesnake and writing ‘Good To Be Bad’.

“David and I just got into a groove and started writing. I really love that record and it turned out great. We were just trying to find a way to connect the bluesy side of Whitesnake with the popular ‘87 record.”

Graham Bonnet / Back in the studio, with a new album slated for this summer 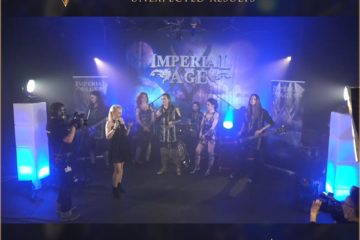