It has been nine long years since Sylvan Realm released their debut album ‘The Lodge of Transcendence’, due to band mastermind Sylvan being in a Master’s program, but they are back with follow up, the thirty-four-minute, six track offering ‘Waldeinsamkeit’.

Line-up wise, things remain the same, with Jason Eckert (Aurora Borealis) on bass, Evan Madden (ex-Woods of Ypres, ex-Woe) on drums and Sylvan on guitars and vocals, but whereas ‘The Lodge of Transcendence’ was more of a progressive slant on Black Metal, for ‘Waldeinsamkeit’ the trio have gone for a more Dark Metal, Depressive Rock and Neo-Folk meld, which should appeal to fans of Agalloch, Fen, Empyrium, Forgotten Woods, old Katatonia and old Anathema in particular.

The title ‘Waldeinsamkeit’ is a German word without a direct English translation, but best translated to “the feeling of being alone in the woods”, a combination of “wald” meaning forest and “einsamkeit” meaning loneliness or solitude.

Which gives a little more of a picture as to what to expect from the album, which manifests as a dark, haunting offering, with a cathartically reflective quality.

It opens with ‘Monumental Abandonment’, where an acerbic tortuous and harsh vocal delivery is balanced against a beautiful repeating haunting melody. This is followed by a brief instrumental ‘On the Wings of the Spiritual Dragon’, which delivers another beautifully haunting guitar melody.

‘A Dirge for the Lost’ is a mournful track, where the title is fairly self-explanatory of the content. I love the clean vocals which have a bleak reflective quality, balancing against a simple but hugely effective bass line and spare, carefully placed drum beats. This is alongside another subtle melody which courses through the track. A very beautiful, evocative and powerful track that moved me greatly.

The soul ripping, tortuous vocals return with ‘Quietus’, perfectly complemented again with a haunting melody which builds to the fore midway through, along with sympathetic bass lines and sparse but effective drum rhythms and an interesting folk twist to the close.

‘Twilight Kingdom’ (Waldeinsamkeit version) is a new version of the track originally featured on previous album ‘The Lodge of Transcendence’. It is a great track on the previous album, but this time around the phrasing is more powerful. It now packs much more of a punch, thanks to the added bass and drum work, the predecessor being just an acoustic version. Again, a hugely engaging piece and one of my favourite tracks of this album. I particularly enjoyed Sylvans clean vocals here.

Closing piece ‘Waldeinsamkeit’ is an acoustic instrumental, which had me repeatedly fooled every time there was a pause. I expected the vocals to break out, which it in a way suggested, but that did not arrive.

However, it is still an excellent acoustic piece, cleverly deceptive in the way it has you poised for something that is not arriving and a great way to end an album.

A man of many talents, band founder Sylvan not only writes all the songs and performs vocals, he also is responsible for the photography and album artwork.

Once again independently released, ‘Waldeinsamkeit’ is available as a limited-edition vinyl or digital download from their Bandcamp page. 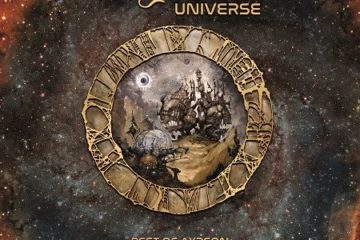