Slade will reissue their fifth studio album Slade In Flame, on limited edition red and yellow splatter vinyl on 26 November 2021. Originally released on 29 November 1974, the album was the soundtrack to the film Slade In Flame, which was described as the “Citizen Kane of rock musicals” by BBC film critic Mark Kermode.

Slade In Flame, which contained the singles Far Far Away and How Does It Feel, entered the UK album chart at number six and was certified gold by the BPI in February 1975. 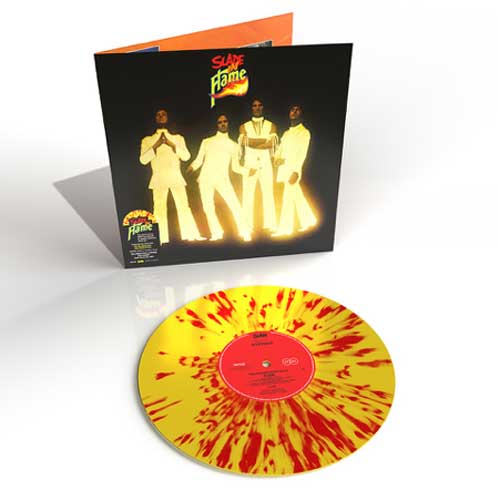 The film was originally a suggestion of the band’s manager, Chas Chandler and was developed as “a sort of behind-the-scenes, nitty-gritty look at the rock ‘n’ roll business.” Upon its release, Sounds said the film “is basically the same old story, told more accurately and wittingly. Unlike Stardust, it has strong music and stage image at the centre of it all, proving that Slade haven’t lost their touch, and the music shines through.”

The album can be pre-ordered at https://slade.lnk.to/sladeinflamePR

Slade In Flame is the third limited edition vinyl re-release and follows Slayed, which reached number seven in the official vinyl album chart, and Old New Borrowed And Blue.