Skypilot, hailing from Northern Ireland, were on the rise in 2019. Their second full length album, ‘The Affront’, had been released and the band had played the coveted Jagermeister Stage at Bloodstock. The plans were to make all this count in 2020.

COVID-19 meant that Skypilots’ rise was put on hold, as guitarist and vocalist David Hall explained to MetalTalk: “As far as our plans for 2020…. we had a great year in 2019, numerous UK dates, all the countries in the UK were hit throughout the year and we closed the Jagermeister Stage at Bloodstock on the Friday night, which was an awesome experience.

“We had hoped to build on that this year with tours with bands like Blind River and Witch Tripper and even a few European shows, but as we all know, that isn’t gonna happen.”

“We’re taking the time now to write for album three and have already begun lining up shows for 2021 so we can hit the ground running when we’re finally able to.”

While its great news that another album is in the pipeline, there must be some frustration that the guys have not been able to promoted ‘The Affront’ in full.

The album is a strong one, with their riff based Metal groove superbly reflected in track like ‘M.O.A.S.T’ and ‘SuperDuperNaut’.

‘Nacho’ is probably our favourite album track, with its stomping riffing making it a great ‘beer in hand, propping up the bar’ live experience. The food related theme runs into track four and ‘The Beautiful Cheese’, another cracking mid paced stomper.

You can sense that song writing process comes primarily from a riff based song structure, with the vocal elements added towards the end of the process.

This is not a criticism at all, as in tracks like ‘5 Movements’ and ‘Happy Helmet’ you are taken along great rides of Metal groove towards belting endings.

It is all about enjoying the emotions of the music and moments, without having to stress about complicated lyrics.

“Slomatics, The Crawling, Strangle Wire, Elder Druid, Lock Horns, Two Tales of Woe and so many other bands are really producing some great stuff throughout all the various sub genres of Metal. 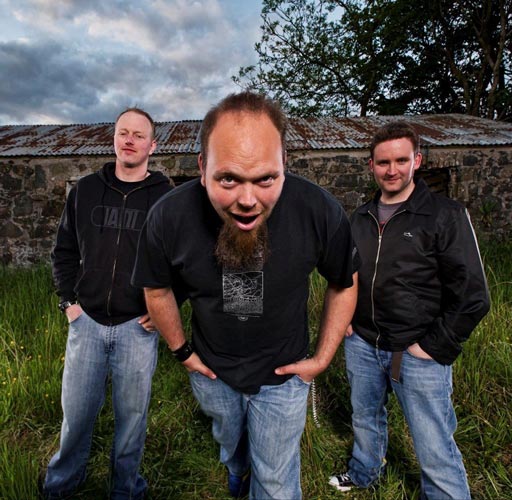 “The Bloodstock Metal To the Masses competition has been very hotly contested in the last few years and given bands a real bit of extra drive, with all bands really going for it to get the slot at Bloodstock.

“The Belfast scene in particular, I’d say, is stronger than it’s ever been, with some really tight and professional outfits doing the rounds at the moment.”

And Skypilot seem to be leading the charge. Check out ‘The Affront’ and, like us, lets look forward to the next one!

King King / 'Never Give In' is second single from 'Maverick'