Blessed By The Light Of A Thousand Stars, the debut studio release from German Black Metallers Servant, is an album described as “a revelation between rawness and atmosphere.” An apt description. It has a clever contrast between raw scathing vocals and hugely engaging, often melodic guitar work, with a sound heavily inspired by the great Scandinavian Black Metal bands, which is more than enough to grab my attention.

For anyone who remembers the German Black Metal outfit Ancient Wargod and their one full length (the 1997 album When Darkness Rises with the dodgy artwork but great music fame), the mastermind behind this project is none other than their former guitarist and vocalist Farago. 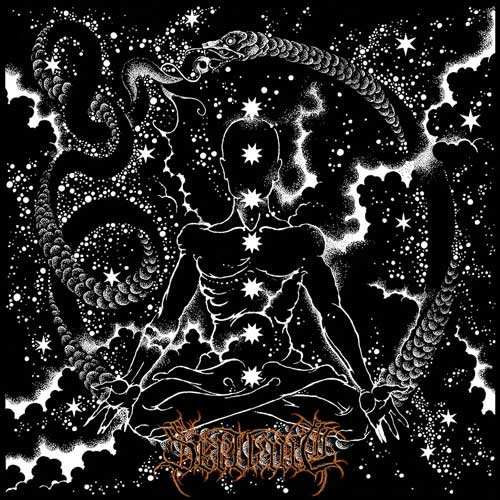 So you will notice some familiarities, although this is far more rounded and melodic and much less raw. It was for the Ancient Wargod reunion that never happened that the rough draft of the first few songs here were originally intended.

Some things are just not meant to be, and given just how good this album sounds with fresh blood joining Farago, bringing these ideas that he has been working on for the best part of the last five years to fruition, maybe Ancient Wargod were never meant to rise again and perhaps they wouldn’t have sounded this good if they had.

The nine-track offering is inspired by modern Satanism and the human emotional world and its longings. The longing for death, the desire for transience, elevation of the self, and the search for the meaning of life with the help of various religious and occult teachings.

Fully engaging end to end, Blessed By The Light Of A Thousand Stars opens with Negate The I, where an acoustic intro edges you in, ending abruptly and switching to an acidic roar and driving blackened riffing. It’s varied in both tempo and mood, with tortuous cleans adding further texture.

The dark, haunting intro on Death Meditation, one of my favourite tracks, ramps up to driving riffs that engage you, drawing you in further and making the perfect backdrop for the acidic vocals. The dark, haunting element of the intro re-emerging amongst the driving riffs, adding continuity, completed by haunting second half leadwork.

Less is more on The Ultimate Occult Worship, where the simple haunting riffs that open are expanded upon to great effect. Followed by the superbly understated Foreshadowing Rite, an instrumental interlude where a clean guitar opener melds with subtle symphonics and distant choral elements, the eerie quality developed further with added piano work.

The next piece, Hymn To The Latest Days, is the perfect balance between the hard and driving and the more melodic and flamboyant. Shifting between these elements as it progresses, it fades to clean guitar work, making it a very cathartic listen. In contrast, Incantation Of The Old Ones is dark and old school, with a frantic driving pace, which does ebb and flow enticingly, so it’s not a linear onslaught, sweeping you up and dragging you along, wrapped in the all-important engaging dark melody.

Destruction And Recreation is another big favourite, although I love this album end to end. It is a superb track that captures the essence of Scandinavian Black Metal whilst being its own beast entirely, an engagingly driving and addictive listen.

Making sure the variance and contrast continues Ecclesia Obscuri, which also impacted me positively, is slow, dark, sinister and enthralling, with a powerfully protracted vocal delivery and an enticing meander to its construct.

The title track, Blessed By The Light Of A Thousand Stars, is another superb piece that reached out to me. It balances the blackened brutality with subtle symphonics and melody perfectly, making you want to listen all over again. Overall, it is a superb album.

Blessed By The Light Of A Thousand Stars was recorded and produced by mastermind Farago himself, while the sound was given the finishing touches by Guano Apes drummer Dennis Poschatta during mastering at the Katzbach Studio in Göttingen.

It will be available as a CD (Jewel Case) from various outlets including, MMD Records/Shop as well as the Nuclear Blast shop and Amazon.