Serene Dark / Embarking on a dark exploration with ‘Enantiodromia’

To say that I am excited that the debut album ‘Enantiodromia’ from Canadian Black/Death Metal quintet Serene Dark is finally out, would be an understatement, having originally crossed paths with them fourteen months ago when they dropped the teaser track and first single ‘Where Time Drowns Still’.

Ever since, I’ve been checking my mail box for news of the upcoming release, hampered further, like most things, by the current global situation, but the time has finally arrived and I am not in the least bit disappointed with the final result. It is a rather spectacular listen, which shouldn’t be too much of a surprise to anyone familiar with the bands previous incarnation ‘Endemise’ and the three album, three EP catalogue they produced under that name.

‘Enantiodromia’, along with the new name, marks the beginning of a new era for ‘Serene Dark’. The band deliver a dark meld of Black and Death Metal, with a very sympathetically yet powerfully applied symphonic element and explores “the confrontation between the shadow aspect of the personality and the integration of it into the self to create wholeness”.

There is a lyrical content influenced by philosophy, stoicism, hermeticism and the occult. The band tell MetalTalk that, lyrically, this is “a journey towards individuation by the exploration of human darkness and transforming that pain into something tangible and meaningful. In essence – to lose one’s self entirely to reach perfection.”

The content is, as you would expect, complex and deep, delivered with a brutal vitriolic intent in a range of “voices”, a higher vitriolic and a deeper growl being the dominant two.

‘Enantiodromia’ is a ten track, fifty-five-minute offering with which the band “plans to unleash a blistering force of evil” and does so, I think, in the finest Metal tradition.

The opening track, ‘Dualitatem’, starts with Carl Jung’s famous commentary “We are the origins of all coming evil”. This is where he states “One thing is sure, a great change of our psychological attitude is eminent, that is certain… because we need more… we need more psychology, we need more understanding of human nature, because the only real danger that exists is man himself. He is the great danger and we are pitifully unaware of it, we know nothing of man, far too little.

“His psyche should be studied because we are the origin of all coming evil.”

‘Dualitatem’ sets the scene and atmosphere for the album perfectly, expanding into a track that is intense and atmospheric, with great swathes of melody bursting forth, from a vitriolic vocal and growling undercurrent. It forms an unworldly feeling narrative, fading into ‘Of Serpentine Form’, which explodes with an intense drum and riff onslaught, enhancing and developing the ensuing dark mood with haunting background chorals, adding further depth and effect.

The first single ‘Where Time Drowns Still’ deals with pain and loss, a theme that is constant throughout this album. A very epic and up tempo crushing track.

Regarding the second single, ‘Trance of Disintegration’, the band tells us: “The aim of the song is to hit you right out of the gate with a lightning-fast drumroll into a heavy guitar chugging rhythm, with choir and string ensemble orchestrations. The idea behind this was greatly inspired by ‘Progenies of the Great Apocalypse’ by Dimmu Borgir.”

This inspiration is very apparent and well delivered.

‘Dweller In The Void of The Spirit’ begins with a haunting string build, developing into a subtle symphonic laced core, that is overlaid by some superb technical leadwork, preceding the acerbic vocal onslaught that, as always dominates. It is rounded by more symphonic elements, before a dark drop away and change in pace but not mood.

Like all the tracks, it is well convoluted and varied, keeping your interest and intrigue, before returning again with more of that excellent leadwork.

‘Reflecting Envenomed’ is dark brutal chugger, lifted with bursts of soaring riffs, dropping back and developing a subtle groove and equally groovy midpoint leadwork, which has a superb disparity against the harsh other side to the track. The guitars make way, slightly, for violin in the latter part.

On ‘Malocchio’ piano and strings add a haunting edge to this unworldly, spoken lyric track, that is understatedly powerful and ‘Grieving the Distortion of Self’ is another dark brutal chugger, but with a haunting edge and soaring leadwork at the mid-point, with the two main voices delivering in blackened harmony to close. 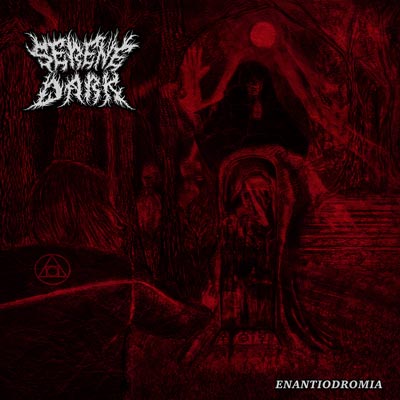 ‘The Last Disciple of Dionysus’ opens on another spoken sound bite and takes a more traditional blackened approach, with the subtle symphonic element building beneath the manic vitriolic vocal delivery. The leadwork breaks through in the second half, leading up to the choral rich, haunting brooder and final track ‘Onward, Burning Radiance’

This develops a more maniacal pace and mood midway through and includes a little more soaring leadwork into the mix, just to break up the mayhem.

This should be of interest to fans of Dimmu Borgir, Insomnium, Abigail Williams, Fleshgod Apocalypse Septicflesh, and Rotting Christ.

For me, it had definitely been worth the wait.

Sari Schorr / Inviting us to join 'The New Revolution'

Serene Dark / Embarking on a dark exploration with ‘Enantiodromia’