Rory Gallagher / ‘The Best Of’ is a stellar ensemble of music 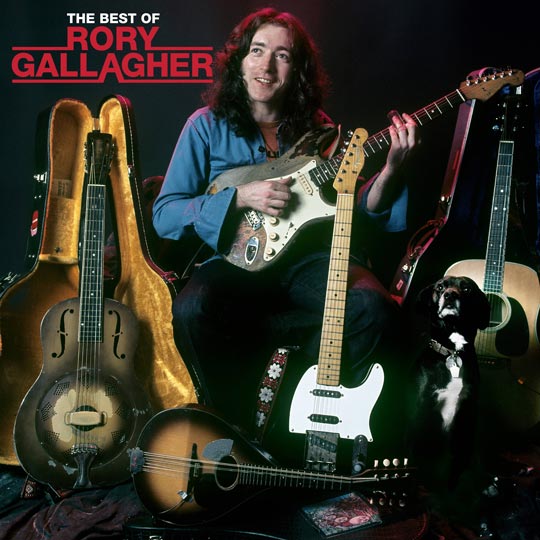 There is pretty much no middle ground when it comes to compilation albums. They are either an all killer blissful and nostalgic listening experience, or simply stink to high heaven of a contractual cash grab. But when it comes to Rory Gallagher, it is virtually impossible to get an anticlimactic dud.

From 1974’s ‘The Story So Far’ to this years ‘Check Street Wizard’ live collection and the other dozen-odd in between, you are going to get quality and bang for your buck whatever the content.

The music world lost the incomparable talent of William Rory Gallagher on 14 June 1995.

From Eric Clapton to Johnny Marr, Brian May to James Dean Bradfield, Slash to The Edge, they have all credited him as a towering influence and of course the ‘at the time untouchable’ Jimi Hendrix labelled him the “greatest Rock guitarist in the world”.

And the legacy of this self taught genius is still as powerful as it ever was.

‘The Best Of Rory Gallagher’ might sound generic and a bit dull for a title and while there will probably be gasps of disapproval at what is not included, it pretty much matches its billing.

On offer is a 2LP/1 CD containg 15 tracks, but if you want the whole story I suggest you do it properly, go large and grab the 30 track double CD.

This opens with ‘What’s Going On’, a magical reminder of his Taste days and a band that need to discovered by those only scraping the Gallagher surface.

What follows is a hat trick of his more undiluted Rock tunes with ‘Shadow Play’, ‘Follow Me’ and ‘Tattooed Lady’, three monster songs that shaped Gallagher’s career in the 70’s.

The superb ‘Daughter Of The Everglades’ is a track that should be included on every Gallagher compilation. It’s silky guitar tones and Lou Martin’s punchy ivory tickling, still make the tummy flutter.

1971’s ‘Duece’ is well represented by ‘Crest Of A Wave’, ‘I’m Not Awake Yet’ and ‘Out Of My Mind’, but to be a little greedy, an inclusion of the live version of ‘Used To Be’ that appeared on ‘Check Street Wizard-Live in 77’ would’ve properly have sufficed.

And speaking of live tracks, it’s a pity a couple of tracks from the classic ‘Irish Tour 74’ album weren’t squeezed in.

But in all fairness, across the fourteen albums covered, the song choices curated pretty much sum up the versatility and quality of probably the finest Blues Rock guitarist there has ever been.

One song you couldn’t predict showing up was his previously unreleased collaboration with Honky Tonk legend Jerry Lee Lewis on The Rolling Stones classic ‘(I Can’t Get No) Satisfaction’.

Bizarrely this was an unused outtake from the Lewis’s 1973 star studded ‘London Sessions’ album.

But as they say “one man’s trash is another man’s treasure” and this is without doubt a gleaming gem.

On the whole, Gallagher collectors and aficionados should not be disappointed with this stellar ensemble of music.

And for those new to the experience, a good chunk of his essential listening like ‘Bad Penny’, ‘Moonchild’, ‘Loanshark Blues’ and ‘A Million Miles Away’ will set you on a truly enjoyable journey.

The man who on 29 December 29 1974 at the Ulster Hall, Belfast, braved The Troubles in Northern Ireland to bring Catholics and Protestants together in a night of Blues Rock abandon, continues to have a unifying effect on music lovers the world over.

And if you’ve been lucky enough to attend the annual Rory Gallagher International Tribute Festival in Ballyshannon, you will know exactly what I mean.

The Best of Rory Gallagher is released on 9 October by UMC. Pre-order the album from here.