In April 2019 Sylvain confirmed that he had spent most of the previous year fighting a battle against cancer.

Given the costs of medical care in the US, a Go Fund Me page was set up and fans of the New York Dolls have been donating and raising funds to support him. To date $69,860 out of the $80,000 target has been raised. 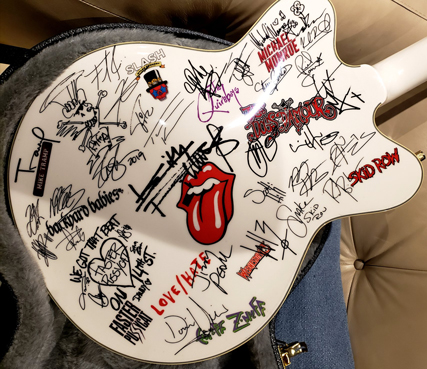 Tyla and Alan Hampton (at whose bar both Sylvain Sylvain and Tyla had played in recent years) decided they wanted to do something. Alan had the idea of buying a Gretsch guitar, as played by both Sylvain and Tyla, getting Tyla to paint it and then auctioning it off to raise money. Tyla has sourced a new guitar generously donated by Gretsch, hand painted an original New Yorks Dolls design on it and asked his friends within the international rock community to sign it.

And they did!! The painted guitar (a new Gretsch Electromatic) is stunning. A unique one-of a kind piece of rock memorabilia that reads like a Who’s Who of 80’s and beyond debauched rock music in all it’s finest glory.

For full details see the auction at this eBay page

You can donate as much as you want when you download the song here: https://songforsyl.bandcamp.com/

EXPERIENCE A 'REBIRTH BY BLASPHEMY' WITH THE LATEST ALBUM FROM ‘MIDNIGHT‘