‘Rebirth By Blasphemy’ is the fourth full length from Midnight, which sits alongside a huge number of demos, EPs, compilations and splits.

It is in many ways, a rebirth for Athenar, the mastermind and sole driving force behind the Cleveland Ohio, Black/Speed Metal project ‘Midnight’ as he rears his head up from the underground, where he has been busily making a lot of noise for just one man over the last seventeen years, with this his debut offering on Metal Blade and for those familiar with his past work, expect no compromises to be made, it’s a blistering offering of the highest calibre!

The ‘Midnight’ trademark blend of Speed Metal, Black Metal and Punk Rock, sums up all the elements I love from both Black Metal and Punk and with this release the sound is both fuller and more raucous than previous offerings, it’s vicious, but still packed with catchy addictive  hooks and thrashy lead work, it’s raw but with polish and finish to the sound and although 2017’s ‘Sweet Death And Ecstasy’, made a pretty decent listen ‘Rebirth By Blasphemy’ goes way beyond that release in what it achieves, it’s bigger, ballsier and an exciting listen that demonstrates both maturity and a stunning ability to create well varied and considered but ruthlessly “up in your face” compositions even if Athenar does claim it’s “really just a get in there, press record and see what happens”  kind of album, to be this organic takes a certain skill, which he has by the bucketload. 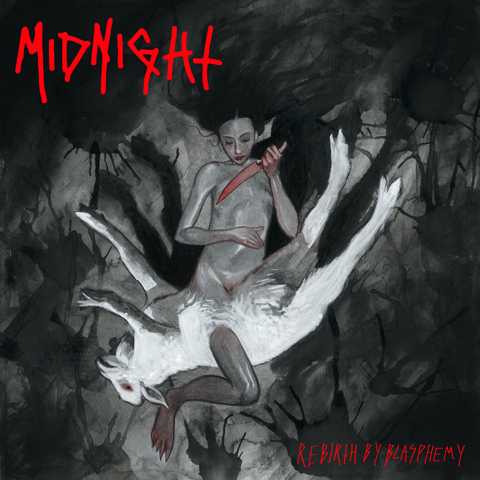 End to end ‘Rebirth by Blasphemy’ is a superb listen from the opening d-beat driven thrasher ‘Fucking Speed And Darkness’ to the closer, the dark and angry ‘You Can Drag Me Through Fire’ with its superb mid-point leadwork. It’s a struggle to pinpoint a favourite track, I love the three d-beat driven thrashers, the previously mentioned ‘Fucking Speed And Darkness’ along with ‘Escape the Grave’ and ‘Warning from the Reaper’ for their sheer brutal intensity and exhilarating drive, then there is the title track, the harsh and compelling ‘Rebirth by Blasphemy’ with it’s addictive repeat riff, or the slower paced brutal pounder ‘Rising Scum’ uplifted with  a burst of second half leadwork and ‘The Sounds of Hell’ which is dark and groovy  in a dirty kind of way. If forced to choose maybe I’d pick ‘Devil’s Excrement’ because the title makes me smile and I did find myself singing along, well actually repeatedly shouting “Devil’s Excrement” with Athenar, it’s dark, brutal, powerful and well delivered as well as hugely entertaining, so possibly my favourite track but it feels wrong to single out one track when the whole release is so good, the composition and instrumentation is superb and the vocals are simply the “vitriolic icing” on the “superbly acerbic cake”.

‘Rebirth By Blasphemy’ is available now from Metal Blade Records and definitely worth your attention and to quote the wise words of Athenar “If you don’t find this catchy you probably don’t have ears!” personally I’ve not felt this exhilarated by an album in quite a while. 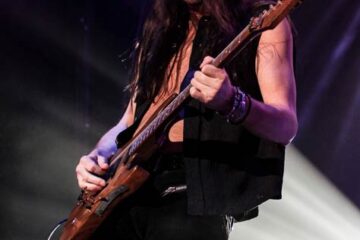